I was up just before 0600, and TLE a short time later......this was departure day!  For the past 5 months, except for our three travel days from SLT to Cape Blanco, we have been stationary.  I have driven the Newell so little I have forgotten a few things.....like releasing the air brake, or where the speedometer is located.....serious.

We had planned to leave at 0900, but were ready to roll by 0800......we said 'what the hay', and I turned over the 6v92, then went outside to disconnect our shore power while the coach aired up.  We drove up to the large campground trash compactor to insert the VW (not the compactor....I know you were thinking that) in the trailer, and while TLE was driving the VW inside I noticed the right rear turn signal/flasher on the trailer and coach were not working.....rats!  I went through my basic troubleshooting 101 steps and after disconnecting and then reconnecting the wires that go to the turn signal relay the turn signals began working again.....okay, pretty easy.....and I resisted the temptation to think it was worse than it was.

Once the car was tied  down we buttoned up the trailer, I put the coach in gear, then went to release the air brake, but the big yellow button would not push in.....geeze, what is wrong now.....I kept looking at it trying to figure out what was wrong and then, much to my chagrine, realized it was already pushed in.....I had not set it when we stopped.  Once that non-problem was solved we began to roll down the road.....every time we have been sitting for a while I am always concerned that the speedometer will still be working, and at first glance it was not working.....or so I thought.  I told TLE it appeared the speedo was broken again, and then began thinking about how I would have to check it when we arrived at AM Solar later that day, but just about that time I looked down again and realized I was looking at the tachometer, which hasn't worked for a few years, and not the speedometer.......lol....the speedometer is just to the left of the tachometer....the speedometer was working just fine, which meant my cruise control would work just fine, too.  I need to drive more......

The 170 mile drive over and up to Springfield, OR was completely uneventful.....we headed north on HWY 101 to Reedsport, then picked up HWY 38 at the Umpqua River and followed it 50 mies eastward to I-5....by the time we hit I-5 we only had 30+ miles left and it was just after 1200 hours......we decided to stop at a rest stop to change into our street clothes before arriving at AM Solar, and then called them to confirm our directions.  We arrived just about 1300 hours and were quickly directed to park behind their building and plug into their shore power.....50 amps!

Plugged in and ready for our October 1st appointment

It has been a long time since were in a place with strong broadband so we could watch videos online, and there were a couple of recent videos put out by our friends Chris Dunphy and Cherie Ve Ard of Technomadia fame that I wanted to watch, so once we were set up for the night I fired up my laptop and began watching their video tour of the renovation of their 1961 GM bus conversion (Zephyr), and then their 1 hour video discussion of why they did what they did.  It was great to see their smiling faces.....it's been a long time since we crossed paths..... 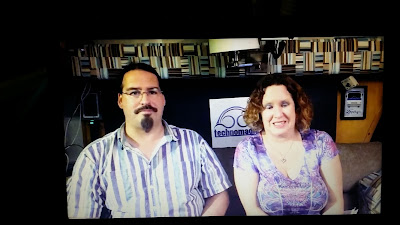 Chris and Cherie.....miss you guys!

By the time I was done watching their videos it was time for dinner....while I had been watching the videos TLE had been looking for a place to go for dinner.......we settled on a place called 'The Growler Underground' which had 4 stars on just 11 reviews.....it is a new place.  Based on those reviews we decided to give them a try, and we are glad we did.  They only serve appetizers, but outside food is welcome.  We ordered two appetizers from their menu and a couple of pints....for me the Georgian Porter and for TLE a Pumpkin Sout......both were stellar.  For apps I ordered their 'Pub Fries' and TLE the homemade 'Brat and Sauerkraut'.....both very yummy! 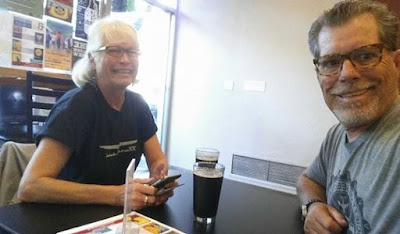 We were back at the coach before 1900 hours, and settled in to watch our first Netflix movie in a long time.....'Noah' (2014) starring Russell Crowe and Jennifer Connelly.  It was interesting, but I'm glad we didn't spend the money to see it on the big screen.  For someone like myself, that has a theology degree, I would have to say the script deviated significantly from the actual Biblical story.....I guess that is what is known as 'poetic license'.  Personally I thought the original story was just as interesting, if not more so.  After that we watched a recorded installment of this week's Survivor.

Thursday we get our additional solar panels installed.....YAY!  Thanks for stopping by!
Posted by Whatsnewell at 8:03 AM