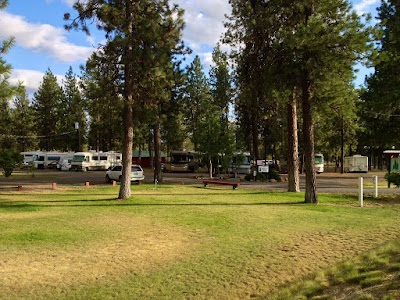 Where we are parking the Newell for the next 8 days

We fly out of GEG (Spokane International) Thursday morning to SoCal to attend the wedding of our middle daughter, Katie, so Wednesday was a day of preparation and packing....I hate packing.  Why?  Because I know from the beginning I will forget something......usually something minor, but every once and a while something big.  I cannot forget my suit, my tie, my dress shirt, my dress shoes, my belt for the suit.  Almost anything else this time around would be minor and I could probably live without it, whatever 'IT' may end up being this time around.

We had a few things we needed at the store so we drove over to the Walmart in Airway Heights to pick up some of those things, then stopped off at 'The Trading Company', and then next door to ACE Hardware.  I've never spent time in, or around Cheney, or the surrounding area, but it is a nice small town with plenty of services.

We were home by 1500 hours, and packing our clothing for the trip south.  While we packed we watched the first of two baseball playoff games.....the first between the Toronto Blue Jays and the Texas Rangers....it was one of the most unusual games I have ever watched.....the 7th inning took almost an hour to play.  Ultimately the game was won by the Blue Jays 6-3.  The early evening game pitted the Houston Astros against the Kansas City Royals, and was won by the Royals 7-2.  So now the Blue Jays will play the Royals to determine who represents the American League in the World Series.  Thursday night the Mets will play the Dodgers to see who faces the Cubs in the NLCS for the privilege of moving on to the World Series for the National League.

Our elevation here in Cheney is close to 2,500' and the temperatures are decidedly cooler, especially at night. We've spent so much time at sea level I think my ears are still 'popping' from the elevation change.

The next five days will be a whirlwind of activity, and time spent with our children, their significant others, and the grand kids.......thanks for stopping by!
Posted by Whatsnewell at 8:26 PM