Moving day always finds me up early with all the details of things which must be done before we turn the wheels on our home.  I have a certain routine I go through in a certain order to be sure I do not forget anything.  There are, of course, a few critical things that if forgotten result in damage to the coach and/or the RV park infrastructure.......

......I'm sure you would agree these are extremely crucial steps to assure a safe departure.  Slightly less crucial, but still quite important are.....

-- Stowing the roof top satellite dish
-- Securing the TV in the salon that is mounted on an articulated hinge
-- Putting away everything that could, in the event of a sudden stop, become dangerous airborne projectiles
-- Closing and locking all exterior basement storage bins
-- Stow the window awnings
-- Look under the coach and trailer to be sure there is nothing there that will get run over when you begin to move
-- Make sure all the cupboards and drawers are secured
-- Turn off all electrical appliances

So, as you can see there is a lot for me to think about.  One thing I do is keep a 'white board' on the steering wheel to remind of things that must be done before I turn the ignition key to the right.  My rule is this board is not removed until I have gone through each step and confirmed the task is done with TLE, and it works. 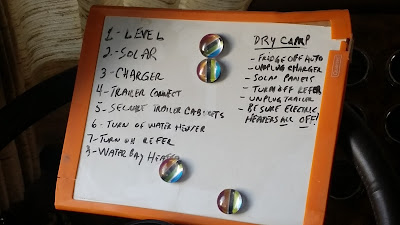 After going through my check lists (both mental and written) we were ready to roll by 0815, and shortly thereafter were merging on to State Highway 2 to continue our trek to Spokane.  We left the park at 900' elevation, and within 30 minutes were climbing out of the river valley to over 2,700'....it was a second gear grinder with grades up to 7 and 8%, and speeds as low as 25 mph, but we got to the top with no problems.  At around the 66 mile mark we stopped off in Coulee City for a brief break, and then stopped again in Airway Heights at the local Exxon to take on 133 gallons of diesel at $2.53/gallon.....aka: paying the rent.  From there it was another 15 miles to an RV Park a few miles west of Spokane, WA where we will leave the coach while we fly down to SoCal for my daughter's wedding.

Around 1530 hours we drove over to my sister, Hilary's home in Spokane for dinner with she and her family, and were back home by 2200 hours.  The Chicago Cubs managed to beat the St. Louis Cardinals to move on to the National League Championship Series.  My Dodgers managed to top the Mets 3-1 on a very strong pitching performance by Clayton Kershaw (7 innings, 3 hits, 8 K's, 1 earned run) to force a game five back in Los Angeles, so if they manage to win the fifth game they will face the Cubs.