Part of the reason for coming back to Whidbey Island was to visit our friends in Coupeville (Bob and Karen) and part of the reason was to visit friends (Gary and Karen) who live on Lopez Island (of the San Juan Islands fame).....I know, I was thinking the same thing.....we have a number of friends going by the name of Karen.  So, we had barely gotten set up on Bob and Karen's property when we headed north in the VW to pickup the ferry in Anacortes, WA that would deposit us on the shores of Lopez Island.  It was suggested by Karen (of Gary and Karen fame) that we make a reservation as the ferry can get quite full at times, so we had done this about a week ago.

The drive up from Coupeville to Anacortes takes about an hour and our ferry departure time was 1235 so we left Coupeville at 1100.  The drive was uneventful, and traffic was pretty light so we arrived at the ferry just as planned......slightly after 1200....I love it when a plan comes together.   As you may, or may not know, there are numerous islands in the San Juan chain, and Lopez Island is the first stop for the ferry as it makes its way to Friday Harbor.  When you buy a ticket to Lopez it is, unless you specify otherwise, a round trip ticket.....our price, which included a 'small' car discount was just $39 round trip. 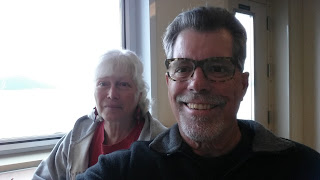 On the ferry....time for coffee 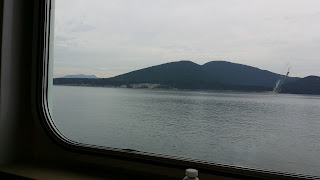 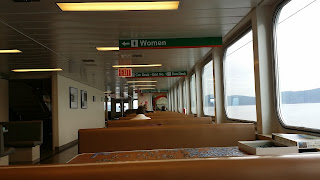 Gary and Karen returned to Lopez Island about 8 years ago after they inherited his parent's home, and have been living there since.  We connected with them at TLE's college reunion last February and were invited, if we found ourselves in the area, to come out to the island and spend a couple of days.....so there is the back story.

Originally we had planned to just take our bikes on the ferry and ride to Gary and Karen's home, but then the forecast was indicating rain later that night, and all day Wednesday, so what was the point?  Our decision to leave our bikes at home and drive the car was a good one as it began raining Tuesday night, and continues today as I write.

Karen had planned to take TLE and I on a tour of the island Tuesday afternoon, but as one might imagine we spent the entire afternoon talking non-stop.  Around 5 we headed into town for dinner at one of their favorite local restaurants.....The Galley gets four stars on 38 reviews, and we would have to agree.  Again we sat eating and talking for a couple of hours.  The restaurant is located on Fisherman Bay Road with a great view of the western sky, which meant we were able to take in a beautiful sunset, of which I neglected to take a picture as the battery on my cell phone had run down.

We spent the evening after we returned to their home watching the end of the Astro vs. Yankee one game playoff, then watched a documentary of Paul McCartney making a jazz album at Capitol Records entitled "Kisses on the Bottom" which was totally fascinating.