This is what we are talking about......this is what we love about the nomadic life......wandering down two lane country roads far from the Interstate where the real America resides.  We love the small towns and the friendly, outgoing people who inhabit them.  We love wandering through their local museums to learn about local history.....we love the ubiquitous 19th century churches that dot their Main Streets......we love just walking around town on a blustery fall day. 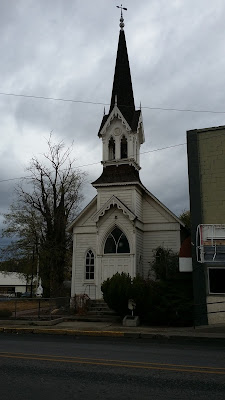 Upon our arrival at the fairgrounds in John Day, OR Thursday we decided to stay two nights so we could enjoy this interesting Oregon town.  Just a couple of blocks from the fairgrounds is the Kam Wah Chung & Co. Museum (interpretive center, if you will) so we decided around 1000 hours to first take a loop around downtown, then make our way to the museum.  In Chinese the phrase 'Kam Wah Chung' means 'The Golden Flower of Prosperity'.  Lung On and Ing Hay were part of the wave of Chinese immigration during the late 19th century from the Guandong Province in China seeking work in the gold fields, and on the railroads.  Lung On decided early on that he would open a store to support the local miners.....he felt there was more money to made by selling to the miners than in the gold fields, and he was right.  Ing Hay was an herbalist.  Together they ran a successful dry goods store, herbalist shop and import business that lasted for 60 years until Lung On passed.

John Day, at one time, had the 2nd largest Chinese population at over 1,000, in Eastern Oregon.  Kam Wah Chung and Company was at the center of John Day's 'Chinatown'. 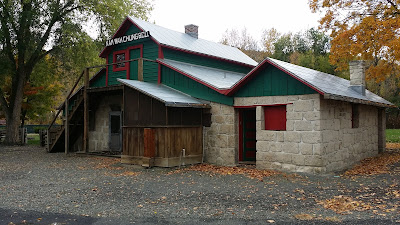 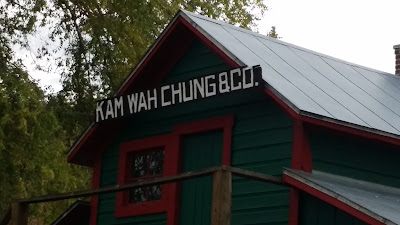 Lung On pre-deceased Ing Hay by a few years, and after Ing Hay died the store was locked up for over 30 years.  At some point the property was donated to the State of Oregon and when they opened up the doors for the first time in over 30 years they found a 'time capsule'.....everything was just as it was left, and everything remains just as it was that day.  You can take a guided tour of the store, which is just a block from the museum, by appointment only.....it is open from April 1st to October 31st each year.....we just made it in under the wire...... 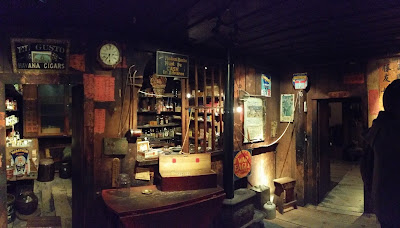 Just as it looked the days the doors closed in 1940

We were done with our tour just before noon time so we decided to make our way back to the downtown area for lunch and a few brews at a local micro brewery called 1188 Brewing Company.  Yelp gives them 4.5 stars on 21 reviews.....we would be closer to 4 stars.  The ambiance, food, brews were great.....the service was a little slow......for us that is not a big issue.....as my friend Karen recommends, we just "put our patience in our pockets" and enjoy ourselves. 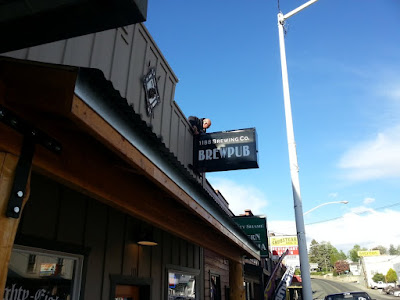 We seated ourselves, and when our server came a few minutes later we ordered a 'flight' of their draught (draft) offerings seen below........rightt to left, front row: Worthy Lights Out Vanilla Stout, Ordinance Kolsch, Pallet Jack IPA and Lost Coast Tan.  Right to left, back row: Ace Perry Cider, Wilde Rick 3 Sisters Red and 1188 Hazelnut.  My favorites were the Kolsch and Hazelnut. 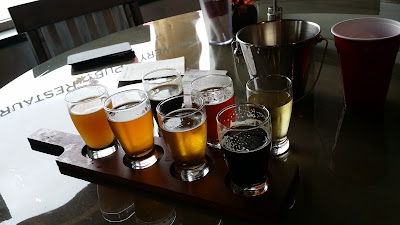 Our 'flight' of brews 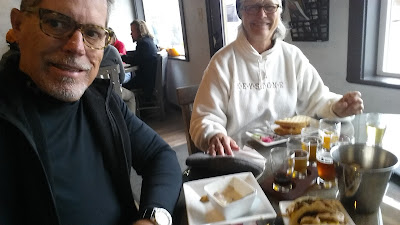 Both TLE and I ordered a cup of their Smoked Salmon Chowder for our app, the Street Tacos for my entree, and for TLE the 1/2 Rueben.  Everything was delicious.  Even though I loved the Street Tacos, I would have been content to just have an entire bowl of that amazing Chowder!

We were back home a little after 1300.......I took a nap and TLE read.......just after I woke up TLE suggested the lighting outside should be digitally captured so I went outside and did just that...... 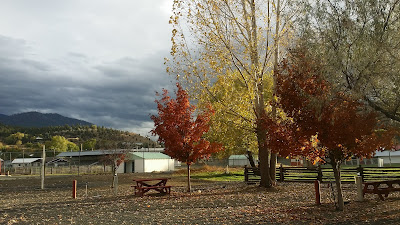 .....within minutes after I snapped this picture the lighting changed....good call TLE!

We spent the early evening watching the 3rd game of the World Series....it was close for 3 innings, but the Mets utilized power and timely hitting to pull away winning 9-3.  We watched  the latest Jesse Stone (Lost in Paradise) movie starring Tom Selleck, which we recorded a couple of weeks ago, then Amazing Race, which recorded while we were watching Jesse Stone.  We were in bed a little after 2200 wondering what magic/serendipity might be in store for us Saturday as we roll our wheels once again southward on US 395.....

Thanks for stopping by!
Posted by Whatsnewell at 7:41 AM