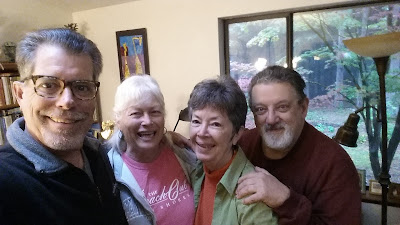 After saying our until next times to Gary and Karen around 0815 we headed down to get in line at the ferry terminal....we had already paid our round trip fare, but there are no reservations for leaving Lopez Island......kinds of reminds me of the phrase from 'Hotel California'......."....you can check in, but you can never leave...".....in order to assure ourselves one of the limited spots on the 0935 ferry we had to arrive one hour in advance, which we did.  Arriving one hour ahead put us 3 vehicles from the end of the line.....wow, that was close.

Washington State provides ferry service, at a charge, all around the Puget Sound area.  The Washington State Department Of Transportation operates the ferry system, and it is very, very well run.  We have ridden their ferries as passengers, with bicycles, in our car, and in our Newell more times than I can count.  The ferries are always, always on time (from our experience).....they are clean, well maintained, very comfortable, and the employees are friendly/courteous to a fault.  Our 0935 ferry arrived at 0920 (on time) and we were loaded and on our way back to Anacortes by 0934.

While TLE remained in the car to read, I went up to the lounge area to set up my laptop to  write yesterday's blog entry.  The ferry ride takes just 40 minutes from Lopez Island, but it seemed like I barely started typing when there was a PA announcement advising we were arriving at the Anacortes terminal.

We took our time returning to Coupeville with a stop at an outdoor produce stand to pick up some produce, another stop at Home Depot, a stop at the local supermarket, then a stop in the tiny downtown area of Coupeville for an early lunch.  We had no idea where we were going to eat, but TLE found an interesting place called 'Mosquito Fleet Chili' which gets four stars from Yelp on 75 reviews, and that rating is well earned.  I had the namesake entree, and TLE had their soup of the day.....Clam Chowder.  It was a cold, heavily overcast day so our entrees with piping hot java really hit the spot..... 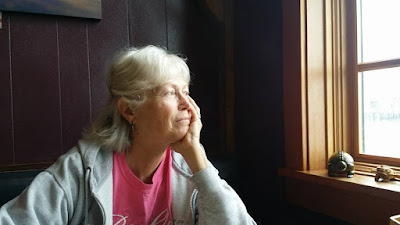 The look of contentment.... 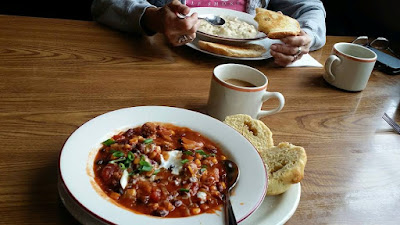 We were home by 1300, took time to unpack, then we both took a long nap.....that was pretty much our day with the exception that evening of me watching, simultaneously, the baseball playoff game between the Houston Astros and the Kansas City Royals and the NFL game between the Indianapolis Colts and the Houston Texans.

Thanks for stopping by!
Posted by Whatsnewell at 8:45 AM