It's interesting how the human mind adapts and adjusts so quickly......we've only been gone from Desert View for three days + days, but it seems like much longer than that.....seems like a month has passed.  I got used to seeing early morning temperatures in the teens and 20's at Desert View, but now, just 240 miles south of that location I think nothing of seeing an early morning temperature in the mid 40's every single day.  I'm beginning to stow away my winter wear in favor of more shorts, t-shirts and flip flops.....I spend more time outside each day than I do inside.

I had three things I wanted to accomplish Monday......completely detail the VW......thoroughly vacuum all the sand and gravel out of the interior, put some leather dressing on the seats, and then wash and detail the exterior.  Secondly I needed to refill my oil reservoir, which was down to about 1 gallon of Dello 400, 40 wt. oil.....the reservoir holds 3 gallons total.    I think the last time I topped it off was about 14 months ago when we were in Wittmann the last time.  Then, after emptying the two 1 gallon jugs of oil which I store in the left engine bay into the reservoir I would need to refill them out of my 5 gallon bucket of the same oil, which had 4 gallons left.  Finally, I needed to dump the black tank as it has been a week since the last dump. 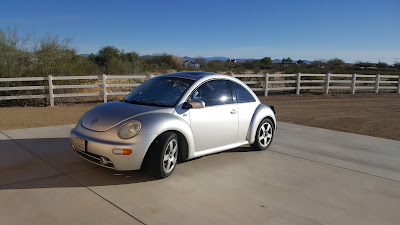 I began the VW detailing project about 10 am and finished just before noon at which time I took a nice break  in Tom's man cave talking with him, then it was on to topping off the oil reservoir...... 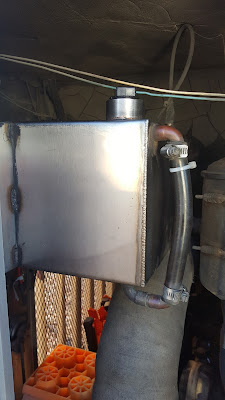 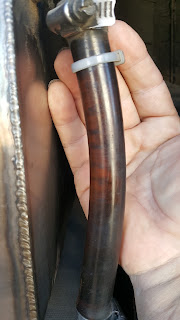 The sight tub has a black line drawn for every quart....you just move the white zip tie down 1, 2, or 3 quarts and then turn on the gate valve to let the oil drain into the engine until the oil level falls to the zip tie level, then turn off the gate valve 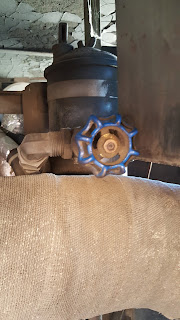 The gate valve that controls the oil flow into the engine

......I have to get out my short step ladder to to stand on while pouring the oil into the reservoir.....I use a large funnel an 18" flex tube......40 weight oil is quite thick and it takes a while to pour in two gallons without it overflowing the funnel.  It took me about 30 minutes in all to get that done, and yes, there were a few spills.

I was in the middle of topping off the oil reservoir when another Newell owner arrived at the McCloud Compound for an overnight stay.  We've never met an Newell owner we did not like and we immediately took a liking to George and Phyllis.  I stopped what I was doing and got out my 10' b50 amp extension cord so George could plug into the second 50 amp plug.  After our introductions I went back to the oil reservoir project finishing it about 30 minutes later.  Then I had to refill the two 1 gallon jugs so I will have 5 gallons of oil with me when we leave Wittmann on Wednesday.  Just for the record, Detroit Diesels series 92 engines typically use about 1 quart of oil every 8 hours of operation, and that was the case when we first bought our 1982 Newell, but over the 60,000 miles we have put on the coach since then the oil usage has decreased to 1 quart every 12-14 hours of operation, so we're adding about 1 quart every 800 miles driven. 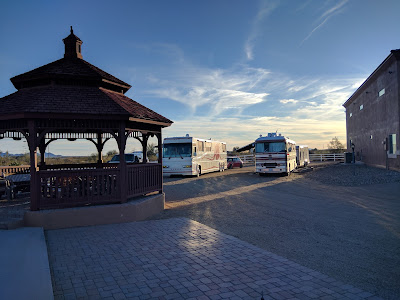 TLE spent the afternoon preparing lasagna for dinner, and it turned out wonderfully.  We had a nice group dinner in Tom and Darlene's dinning room.  I was tired after a long day of physical work, which I haven't done for a long time, so after dinner I retired to the Newell, took a nap, and then watched some TV before heading to bed around 10:30 pm after awaking from a second nap!  TLE spend time inside playing cards with Darlene.  So, Day 3 of 'Decompression' is complete!

When you shop Amazon, please use our link (below) to access their website.......we will appreciate every purchase you make using our Amazon Affiliate link, and  remember, using our link will not add one penny to your purchase, plus we will receive a small commission which helps defer the costs of producing this blog each day.
Posted by Whatsnewell at 8:27 AM