While this post will be only partly about what happened on Wednesday in the fair land of the Desert View Watchtower, most of it will be devoted to marking the 10 year anniversary of our purchase of our 1982 Newell Classic.  It was on March 1, 2008 that we handed over the cashier's check to Fred Hornbacher, the current and second owner of a 1982 Newell Classic, and received the keys and title to our soon to be new home on the road.

We did not know at that time how fundamentally  important our purchase of this Newell would be in the coming years.  We did, however, know that in spite its age at the time of 26 years that it was the best used coach we had inspected an driven even though it was older than most those units by a good 12 years.  We had been looking for a used (8-10 years old) Class A diesel pusher motorhome for over a year and had been very disappointed in the used coaches available in our price range.  Then I stumbled across an ad on Craigslist for this 1982 Newell.  I had never heard of Newell before, and I knew little to nothing about her power plant.......a Series 92 Detroit Diesel V-6 with an after cooled turbo.  It was located down in Palm Desert, CA, and we happened to be going to a wedding in that area that weekend.  I called the owner of the Newell and made an appointment to view the coach on Friday, February 15th. 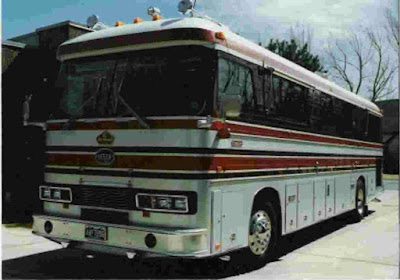 The Craigslist ad picture which captivated me back in mid February, 2008

We arrived at the storage yard where the Newell was stored around 1 pm and found Fred walking around the front of the coach.  He introduced himself to Elaine and I and then opened the entry door to the Newell.  Elaine was the first up the stairs, and before I had made my way to the top of those same stairs she was already proclaiming that she really LIKED this coach.  Whoa, wait a minute I thought to myself.....this thing is 26 years old.....it looks nice, but it might be a potential money pit due to its advanced age.  Fred gave us the full $1.95 tour and after a couple of hours we were both very impressed, and very interested.  We made arrangements to stop back by on Sunday afternoon on our way back home to see it one more time.

In the intervening time I spent several hours reading things on the internet about Newell (very impressive), and even more about Detroit Diesels 6V92 two stroke diesels.  By Sunday I was feeling much better about this 26 year old coach.  We brought my ex brother-in-law, Claude, with us who did know a lot about Newells, and Blue Bird Wanderlodges......he was also very impressed.  Fred advised us he would need a $7,000 deposit on the $39,900 purchase price by Wednesday of that week to hold the coach, and the balance by March 1st.  I was still not certain at that time that we would move forward, but after a couple of days I had pulled the deposit together and drove down to Palm Desert once again.  Before I handed over the deposit I wanted to drive the Newell so Fred took me on a 25 mile run on Interstate 10.  After showing me how to drive it and explaining many things about the Newell and its operation he surrendered the drivers seat for the return drive.  Needless to say I was blown away by how quiet it was, and how it just floated down the highway on a cushion of air.  It was way easier to drive than I had expected!

Well, needless to say, after our return to the storage yard I handed over our $7,000 deposit to Fred, and then headed home to pull together the final $32,900 which was due, as I wrote, on Saturday, March 1st......less than 2 weeks away.

Elaine and I returned to Palm Desert Saturday morning on March 1st with the balance of the purchase price in the form of a cashiers check and took possession of our 1982 Newell..... 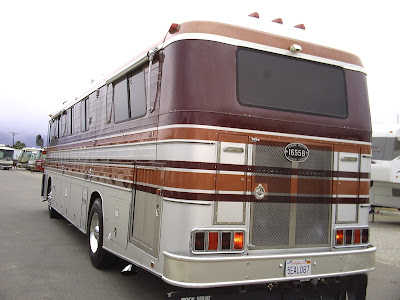 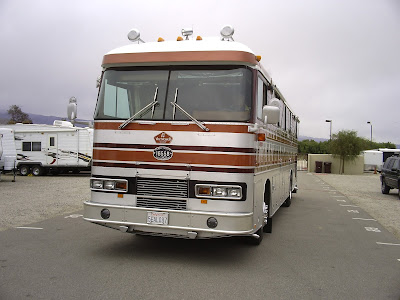 ......we had decided we would drive it directly to an RV park that day to plug it in and get familiarized with our purchase.  We thought it would be a good idea to be close to Fred in case we had any problems, or questions.  I had obtained a site up in Desert Hot Springs for the night and so began our grand adventure.  The drive home Sunday, March 2nd, was very interesting as I had a difficult time keeping the Newell centered in the lane.....I tended to keep moving on to the shoulder of the freeway, even though it looked to me like I was in the middle of the lane.  Elaine was very good about reminding me to move more to the left.  Over the years my brain has adjusted to driving an 8 foot wide monstrosity and keeping it properly centered in the lane.

We arrived at our home in Ontario, CA mid afternoon on Sunday, and proudly parked our Newell at the curb for the first time...... 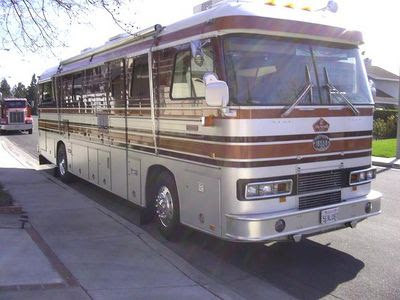 Parked for the first time in front of our home in Ontario, CA, March 2nd, 2008

.....within minutes of our arrival home several of our neighbors came over to take the grand tour.....we were so proud!

Three years later on February 1, 2011 we moved into the Newell to live full time.  Elaine had about 7 months before she retired so we leased out our house, and moved the Newell into Rancho Jurupa Regional Park where we gave the ranger a one year commitment of volunteer service in exchange for a paved, full hookup site..... 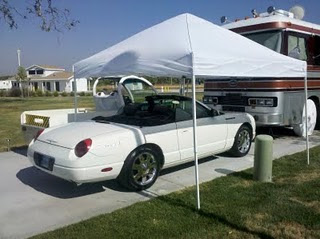 ......exactly one year later with Elaine retired we hit the road, and recently completed our 7th year of full time living in our Newell, and 6th year of traveling.  Over that time we have become very good friends with many Newell owners....the kind of friends I cannot imagine not having in my life today whether, or not they own Newells.....this was the unexpected gift that purchasing a Newell bestowed upon us.  In addition, the Newell has NOT been a money pit.  Other than replacing the tires, changing the oil and filters, and having the drive train lubed on a regular basis I have only had two problems with the Newell.  In February of 2012 the water pump failed as we arrived at the home of Elaine's sister in Tyler, TX.  I was able to locate a replacement gear driven water pump on eBay for $89 shipped, and repaired it myself.  The second problem occurred in April of 2017 as we left SoCal to head up to Lake Tahoe for another summer at Tahoe Valley Campground.  A secondary coolant hose failed, and once again I was able to quickly source and replace that $25 hose while stuck on the side of the road near Riverside, CA.

It seems almost impossible that 10 years have come and gone since our decision to make this 1982 Newell our home.  We have no regrets, and have never looked back, or thought 'what if?'......we love our home, and cannot imagine living anywhere else.....period.  We love being able to change our view without going through escrow.  I love the simplicity of her equipment, which enables me to fix virtually anything that might break, or go wrong.  She has been economical to own and operate.

Of course, I cannot end this current missive without some reference to Wednesday.....it was another normal, 'unbusy' day at the General Store.....I dropped $134, and TLE just over $400 again.   It turned out to be a delightfully sunny day, and I was able to remove the rest of the snow from our artificial turf.....now to get it dried out and stowed in the trailer before we depart in 18 days.

When you shop Amazon, please use our link (below) to access their website.......we will appreciate every purchase you make using our Amazon Affiliate link, and  remember, using our link will not add one penny to your purchase, plus we will receive a small commission.
Posted by Whatsnewell at 7:48 AM