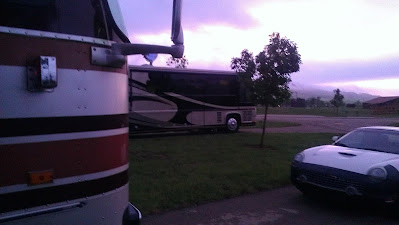 For one weekend our three day weekend became a two day weekend.  The owner of SRRVC wanted us to wash the exterior of his house up on the hill, and we figured it would take two days, and need two to three people to do the job.  Since Terry is injured, and Fred and I only share one workday in common we deferred our Sunday  off day so Fred, TLE and I could work on the project for two days.  We only worked 2.5 hours Sunday, so it hardly seemed like we gave up a weekend day......

There I am in the background directing traffic

We are mostly done for the day here

......in a little over two hours we managed to wash the entire back of the house, the left side (in the picture above), and most of the front side (faces the ocean).  Fred and I  took turns spraying the soapy solution on the exterior, then we would both use brushes on 16' poles to scrub the walls, then TLE would rinse off the residue with another hose.  We'll finish the balance of the house exterior on Monday, and retrieve our lost weekend day at a later time....probably this Thursday, or next Monday.
We were home by 12:30 pm watching the final groupings of the day at the U.S. Open.  By the time the final groups were finishing the front 9 there were at least 10 players in position to win it all, but then the back 9 came and began to peal away the contenders one at a time until there were just two left with a chance.  Ultimately John Rahm, Spain, prevailed by birdieing the final two holes to finish at 6 under par, and one stroke ahead of the second place finisher.
We never saw the sun on Sunday....kind of ironic, no?  The fog rolled in and out all afternoon, and a heavy mist enveloped SRRVC* leaving everything quite damp.  Subsequently, there was no sunset to memorialize, just the ever present gray fog.  On a positive note, the fog meant the north wind has abated for the time being.
Thanks for stopping by!
*SRRVC = Seal Rocks RV Cove
When you shop Amazon, please use our link (below) to access their website.......we will appreciate every purchase you make using our Amazon Affiliate link, and  remember, using our link will not add one penny to your purchase, plus we will receive a small commission which over the course of a year adds up to enough to by a tank of diesel for which we thank you very much!
Posted by Whatsnewell at 8:12 AM