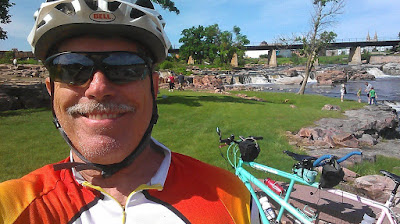 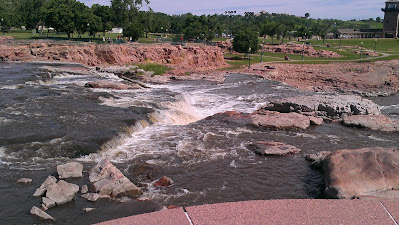 My Wednesday workday began about 9:40 am with me trimming hedges (a never ending job here), which is not one of my favorite tasks.  From the beginning of my shift the pole trimmer would not idle.  If I took my finger off the throttle trigger for even a split second it would die.  I kept thinking it would smooth out, but it never did.  After an hour of frustration I reported the malfunction to Greg (Terry was in Newport at the time), and then retrieved the mower, string trimmer, blower and rake from the landscape shed, and began to mow and trim sites which needed the attention.  Over the next three hours I managed to clean up 5 sites as well as half the grass walkway down to the beach trail.  In total I worked four hours....that's becoming a regular thing apparently.
Wednesday began with crystal, clear, blue skies and remained that way the entire day.  Unfortunately, the north wind kicked into gear making it very chilly outside, so I spent the afternoon indoors.  TLE had her usual split shift on Wednesday returning home for the final time a little after 4 pm.  As she entered the coach she struggled to close the door as the rear of our coach faces north, and that north wind really grabs it.
In the evenings we've been watching 'Yellowstone' (Kevin Costner) which premiered in 2018, and has a total of four seasons 'in the can'.  We're currently at the beginning of season three, and really have enjoyed it so far.  It is kind of a modern day western.  Check it out!
Thanks for stopping by!
When you shop Amazon, please use our link (below) to access their website.......we will appreciate every purchase you make using our Amazon Affiliate link, and  remember, using our link will not add one penny to your purchase, plus we will receive a small commission which over the course of a year adds up to enough to by a tank of diesel for which we thank you very much!

Posted by Whatsnewell at 8:25 AM