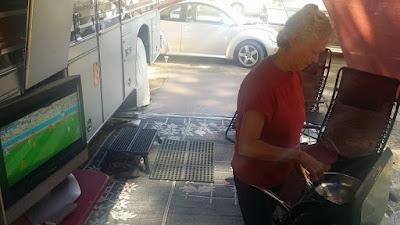 Fred, TLE and I returned to the house on the hill a little after 10 am Monday to finish what we had begun on Sunday.  In all it took us just over two hours to finish, and another 30 minutes to put all the gear away for another year.  The sun never broke through, and the fog continued to roll in and out the balance of the day.
Following a brief respite I headed out to the trailer to cut up some cardboard which had been accumulating, and then went to work on my flagpole.  This new pole (got it late last year) is way taller than my old one, and when it gets windy I have to take it down for fear of it breaking like the old one.  The pole is made of telescoping fiberglass, and with the extra height it tends to bend quite a bit in wind over 13 mph.....it begins to look like a pole vault pole being bent into almost a 'U' shape in the wind.  In all I shortened it by four feet, and now it is about as high as the old one, and will not catch as much wind.  After 6 years of faithful service the old one broke, so I ordered the shorter one back in the Fall (the same length as my old pole), but they sent me the longer one by mistake, I guess.  At first I kind of liked the taller pole, but eventually came to dislike it for the reason previously stated.
By the time I finished the flag pole retrofit it was after 4 pm, and I had yet to haul the cardboard and trash down to the dumpster, so I quickly threw it all in the back of the VW and hauled it down the hill to one of the park dumpsters.  By the time I returned TLE was already preparing dinner....where did that day go?
TLE and I continue to be asymptomatic to the Wuhan Flu. There have been no deaths here in Lincoln County in over four months, and only 21 total the last 16 months.  The total number of cases reported stands at just over 1,400 ALL TIME.....that's an average of 89 cases per month since February of 2020, and 1.3 deaths per month....hardly pandemic type numbers.  The weekly average for new cases is two per week.  I think it is relatively safe to say the 'flu season' is over on the Oregon Coast.  Are we ever glad we live in rural America.
Thanks for stopping by!
When you shop Amazon, please use our link (below) to access their website.......we will appreciate every purchase you make using our Amazon Affiliate link, and  remember, using our link will not add one penny to your purchase, plus we will receive a small commission which over the course of a year adds up to enough to by a tank of diesel for which we thank you very much!
Posted by Whatsnewell at 8:12 AM