We have spent a lot of time with Tom and Darlene over the past couple of years both at their home in Arizona, and on the road in our Newells, but Monday that time together came to an end until next year.  We have shared a lot of laughs and broken a lot of bread since late January.  TLE and I reported for duty before 8 am and I hopped in my golf cart to drive over to Tom's site to say our 'until next times'...... 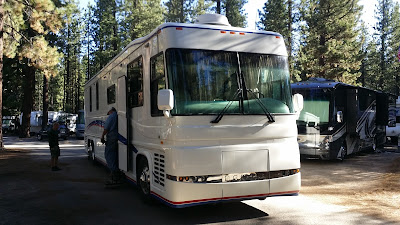 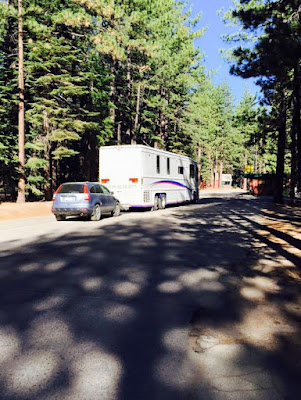 Until next time Tom and Darlene....you will be missed

.......then it was time to commence with the day's regularly scheduled programming.....67 departures were scheduled and about 37 arrivals........added to that are the 140 sites that are currently occupied.  With all the comings and goings, and current residents I stay pretty busy for my entire shift.  In the middle of all that Harry took me out to see what he is doing on the perimeter dirt road that has fallen into disrepair over the years......he is clearing and smoothing the road so it can be used again by customers to hike, ride their bikes, walk their dogs, etc.  I'll try and get some pictures the next time we go out, but is coming along nicely.

I was off at 2:30 and home, in front of the TV watching another World Cup match between England and Norway, which was won by England 2-1.....this is the first time England has won a match in the round of 16 (16 teams remaining after group play).   The referee team in that match was up to the task and did a competent job.....by competent I mean they only interfered when necessary, and just let the players play.....you were hardly aware of their presence....that is the way it should be.  The night cap between the USA and Columbia was a different matter.  This match drew a referee team that was very poor at foul recognition......many fouls called were what I call 'simulated fouls', or in the more popular vernacular, 'dives'.  In one case a Columbian player 'dove' (faked a foul), which was whistled by the referee....that was bad enough....but then the referee gave the USA player a yellow card.  And that brings up another glaring deficiency in this year's crop of FIFA referees......most of them have no idea what constitutes misconduct.....when misconduct occurs a yellow, or red card is issued.  It usually means a player has engaged in reckless behavior endangering the safety of another player.  In this match two yellow cards were given to USA players who already had received yellow cards in other matches, meaning they will each miss the next match.  Ultimately the USA prevailed 2-0 over Columbia, and the less than competent 3 person referee team, to advance to the round of 8 (8 teams remaining).

We closed out the evening watching the 2 hour season premier of 'Last Ship' and were in bed just after 10 pm..... .if you enjoy 'post apocalyptic' themed shows this one is very interesting.

Posted by Whatsnewell at 7:06 AM