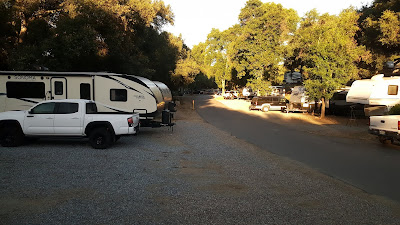 Before I get into Thursday's shenanigans I was remiss in not mentioning some excitement we had on Wednesday.  Mike, one of our high school employees (will work for us this summer only) backed the company truck over a large anti siphon valve near the office and created a temporary geyser...... 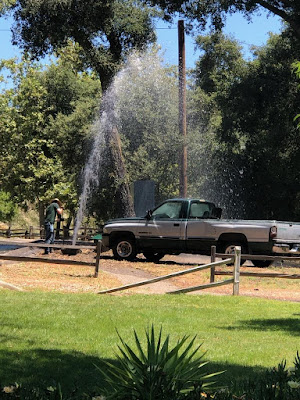 ....fortunately the shutoff valve for that anti siphon valve was right next to it, and we had the water shut off pretty quickly.  The office is the lowest point in the park, and, therefore, has the greatest water pressure.  On the upside, the company truck got washed for the first time in months!

After my opening rounds I headed to the tool shed to get some, of course, tools fully intending to do some more work on the split rail fence along the southern border of the park.  As always I noticed the missing pink concrete garden border along the right side of the driveway, as well as several other sections which had been pushed over by the ice plant.  I have been thinking about fixing that for a long time, and just decided on the spur of the moment to do it Thursday.  The missing section along the right side of the driveway was not really missing, it was just buried under the gravel.  Over the years people backing the truck into the driveway had run over the decorative, concrete border over and over eventually pushing it below the surface of the gravel.  I decided to dig it up and restore it....... 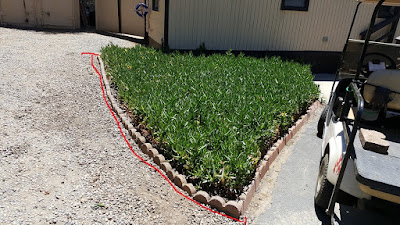 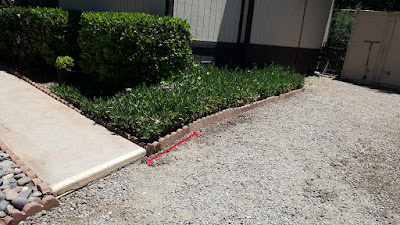 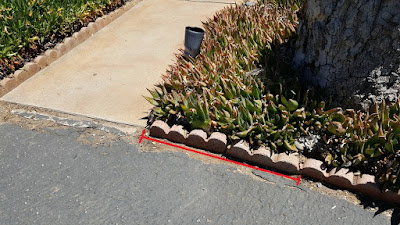 ......the border along the right side of the driveway took a long time to excavate, and I spent most of the morning fixing that section, but before I was done I took care of two other smaller sections, also.  When TLE and I first arrived the office/tool shed/maintenance building area looked okay, but it needed sprucing up after a few years of neglect.  Now that 95% of the weeding has been done, the ice plant cut back, and the garden borders fixed it is beginning to look pretty good again if I don't say so myself!

I spent the afternoon spraying weed poison (not Roundup) around the Red Barn, the dog run, and around several of the mini golf holes.  In all I deposited about 10 gallons of weed killer.  This stuff works slowly, but over the course of 10 days the weeds die, and stay dead.  I just have to keep up with any new ones as they appear.

The last 90 minutes I spent working on returning a dozen split rail fence posts to the upright position, and replacing a couple more rails.  Just like that another day at RORVR was in the books.

TLE was home a little after 5 pm, at which time we commenced to watch another FIFA Women's World Cup match; this one between England and Norway.  Based on the last couple of matches Norway had played I expected this to be a very close match, but England scored a goal about 2 minutes into the match from which Norway never recovered.  England prevailed easily in this match 3 to nil, and it easily could have been 5 to nil (including a missed penalty kick).  Next up: The USA vs. France....this one should be a good game, and I have no idea who will win.

When you shop Amazon, please use our link (below) to access their website.......we will appreciate every purchase you make using our Amazon Affiliate link, and  remember, using our link will not add one penny to your purchase, plus we will receive a small commission which over the course of a year adds up to enough to by a tank of diesel.
Posted by Whatsnewell at 7:23 AM