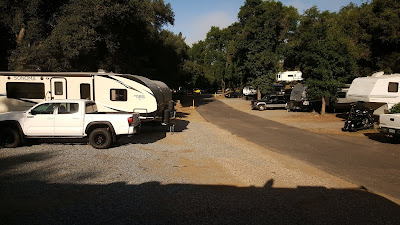 Sundays have become my pool vacuuming day.  We work a short day (9-2), and it usually takes 2+ hours to properly sweep and then vacuum the pool.  We take lunch at 11:30 am on Sundays, which leaves us just 2 hours after lunch before we punch the clock.  Having a short day just before our two off days makes it feel more like 2 ½ days off work.   Sunday is a good day to do a thorough cleaning of the pool as it is also 'vacuum' day in the park.....all the weekenders are leaving by 11 am each Sunday so there is no demand for the pool to be open...... 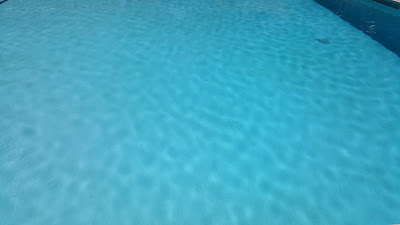 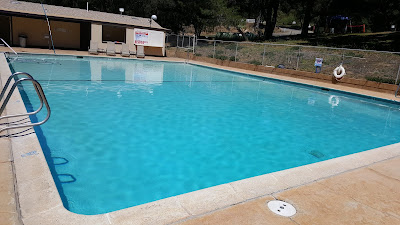 .....while I have been generally negative about last summer's experience with the management at Smuggler's Den, I have to give kudos to Todd, the owner's husband, who taught me how to maintain a pool, and keep it looking good day after day.

I finished my pool work about 11:25 am and headed down to the office to retrieve TLE for our lunch break.  After lunch I spent about 30 minutes driving through the park at Marnie's request to document which sites have electrical meters, and which do not.  The master list seemed inaccurate, and the quick survey did review a few sites, not on the meter list, which did have meters.  I then spent time trimming some iceplant at the office which had been missed the day prior.  By the time I finished with that task it was almost 2 pm and time to put away my tools.

Within 20 minutes of arriving home I had the outdoor TV set up for viewing the two FIFA Women's World Cup round of 16 matches.....England vs. Cameroon, and France vs. Brazil, and by 6:30 pm TLE and I were in a soccer coma.  The England vs. Cameroon match ended up being a farce.  England won 3 to nil, but the behavior of the Cameroon players when calls went against them was disgraceful.  On several occasions after a call with which they disagreed they would refuse to restart play for minutes at at time.  So much time had to be added at the end of each half that we ended up not seeing the end of the game as the recording time had expired, and I had even added 30 minutes to the recording time.  It was just embarrassing.  The second match, while very, very well played, had its own share of controversy.  At about the 20 minute mark of the first half France appeared to have scored a goal, but there was a collision between the French player who scored the goal, and the goalkeeper.  I told TLE that the keeper had been interfered with, and that the goal should be disallowed.  Ultimately the VAR (Video Assisted Review) team made that exact ruling, but the announcers went ballistic.

I was a professional soccer referee for 20 years, and we were taught to protect the goalkeeper when they were going after the ball with their hands extended over their heads......they are at their most vulnerable at that very moment.  In this case the keeper had two hands on the ball when she was hit hard in the chest by the attacking French player's shoulder dislodging the ball from her hands, and then into the goal.   To me it was an obvious call, but to hear all the announcers during the rest of the game, and afterward complaining about call was mystifying. While I never officiated at the FIFA level, I did a number of semi pro games, Division 1 College soccer, and a hundred or more matches in the U-19 Premier league in SoCal from where many of the top American professional soccer players have come over the last few decades.  Regardless, the principles are the same.

Ultimately France did score a goal in the second half, which was countered a few minutes later by Brazil.  At the end of regulation play the score was tied 1-1 meaning they had to play two mandatory 15 minute over time periods.  France scored the winning goal one minute into the second 15 minute overtime period and held on to win the game 2-1.


When you shop Amazon, please use our link (below) to access their website.......we will appreciate every purchase you make using our Amazon Affiliate link, and  remember, using our link will not add one penny to your purchase, plus we will receive a small commission which over the course of a year adds up to enough to by a tank of diesel.
Posted by Whatsnewell at 8:45 AM