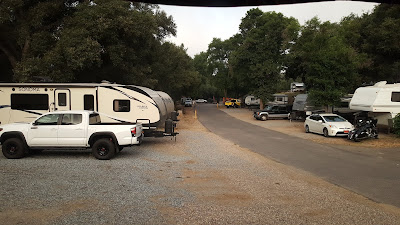 Monday began with lots of sun, and ended the same, but it never really got too warm....the forecast high for Monday was 82° F, and I think it might have gotten there.  It was just a very pleasant early summer day.  As is our habit on days off we took a walk around the park, which is about 1.25 miles, give or take.  While that is not a long distance, there is the elevation gain factor, which comes in at just under 200' from beginning to end.  When we passed by the office area I took some pictures of the ice plant trimming I did last week..... 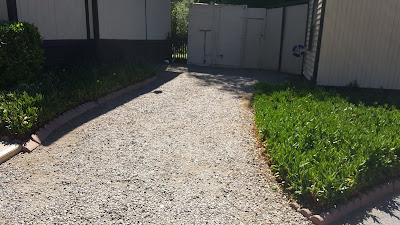 That's the tool shed straight ahead, and the maintenance building is the building to the right of it 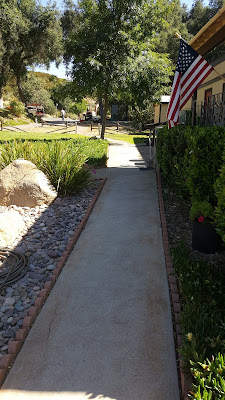 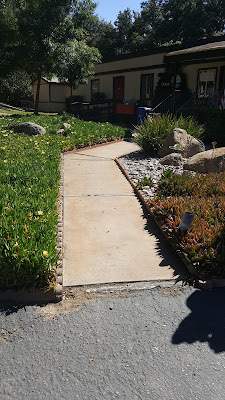 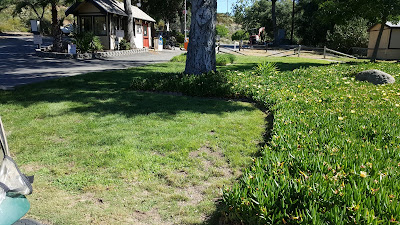 The entrance kiosk, and security gate 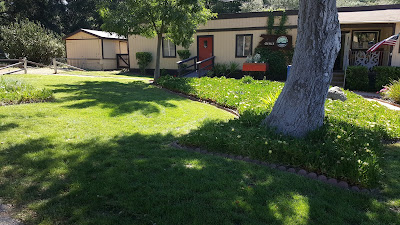 .......the ice plant was extending out over the sidewalk about 12" before I trimmed it.  We were back at the Newell around 9:30 am, at which time I set up the outdoor TV so we could watch the two soccer matches slated for Monday.....USA vs. Spain, and Canada vs. Sweden.  The first match was much to close for comfort.  The USA gave up their first goal of the 2019 FIFA Women's World Cup on a silly mistake by one of the fullbacks.  The USA had just scored a goal 3 minutes earlier on a penalty kick.  It remained tied 1-1 until the 76th minute when another penalty kick was awarded to the USA.  Both penalty kicks were legitimate, and there was no controversy, thankfully.  The USA played what I call 'oooogly' (very ugly) soccer, and was lucky to advance to the next round, and, frankly, this match could have gone either way....Spain played a great tactical match against the USA frustrating them, and keeping them from getting into any kind of rhythm. 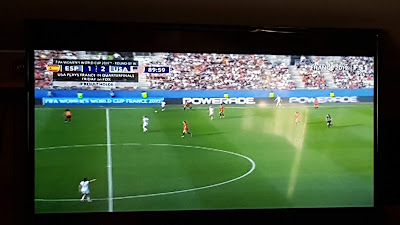 In the second match Canada never really had a chance.....Sweden was just way better than they were on this particular day....the game was not really as close as the 1 to nil final score would indicate, although Canada did have a chance to tie when they were awarded a legitimate penalty kick, but the coach, inexplicably, did not have Christine Sinclair, their best player, take the kick.  The player who was chosen to take the kick had her kicked easily blocked by the Swedish goalkeeper.  Sweden, on the other hand, had many chances to score, but just did not convert.

We spent the rest of the afternoon reading outside listening to music on Pandora.  TLE made a delicious dish called 'Orange Chicken' with a side of stir fried zucchini, onions, celery, and mushrooms, which we ate outside at our picnic table....the first time since we arrived at RORVR.  I wish we had taken pictures.....another restaurant quality dish from the amazing TLE.  To chase the dinner TLE chose a Savignon Blanc, which was the perfect pairing for this dish!

The evening was so delightful we remained outside after dinner reading until almost 7:30 pm, and only went inside because it began to get a little cold....the perfect day off work!


When you shop Amazon, please use our link (below) to access their website.......we will appreciate every purchase you make using our Amazon Affiliate link, and  remember, using our link will not add one penny to your purchase, plus we will receive a small commission which over the course of a year adds up to enough to by a tank of diesel.

Posted by Whatsnewell at 8:02 AM