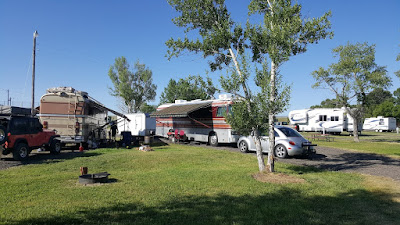 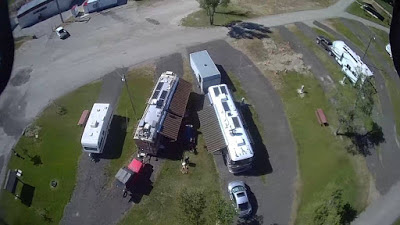 I worked by my lonesome Wednesday, which is my preference.  I returned right off to site #24 to trim one of its hedges, then mow, and trim around the edges with the Sthil string trimmer.  I also finished picking up the clippings from Tuesday's hedge wars, and then hauled them up the hill to the burn pile for future reference.  In all I ended up mowing sites 6, 39, the dog park, the dump station area, and overflow parking area.  In spite of having only two outside workers Fred and I are managing to keep up with the load and everything looks pretty good.  After taking care of all the 'incoming' sites  I headed home around 2 pm...yup another 4 hour day....in fact I've averaged four hours per day for the first three days this week.
TLE arrived back at the office for the second half of her Wednesday split shift as I was putting away my golf cart, letting me know the eBay package I was expecting arrived, and was up at the Newell.  One of the items was the new shrouded cable for our Winegard Traveler Automatic satellite dish.  You will recall the original one went bad last week, and I had to install a temporary one.  I planned to install it Thursday, or Friday, but Mr. Jello had other ideas.  As I was sitting reading the instructions for the new cable while watching the second half of of Stage 17 of Le Tour, that pesky message appeared on the TV screen again.....'The receiver has not received any programming information in over an hour'....and a few seconds later the picture screen went blank....okay, I guess I'm installing the new cable now.  For the record, the shrouded cable, which costs $45 for its 6 foot length, is made to be completely weather proof....the temporary cable I installed was definitely not weather proof, and just one weeks of salt air did it in.
Having just gone through this exercise a little over one week ago I was up on the roof with all of the needed tools in less than 10 minutes removing the old cable, and installing the new weatherproof one.  Once that was done I pushed the 'ON' button in the interface box to allow the dish to reorient itself, and dial in the three satellites necessary for the HD (High Definition) picture.  Within 5 minutes order was restored, and I had a picture once again.  A rare timely delivery by UPS saved the day, and thwarted Mr. Jello's diabolical scheme.
The sun set at 8:59 pm Wednesday evening, although we could not see it for the heavy marine layer.  So, for the first time in several weeks the sun is setting prior to 9 pm.  The funny thing about Wednesday was the sun was actually out all day long, but the marine layer returned with a vengeance about 90 minutes before the sun was to set, and obliterated what could have been a nice sunset viewing opportunity.....BLIMEY!
Thanks for stopping by!
When you shop Amazon, please use our link (below) to access their website.......we will appreciate every purchase you make using our Amazon Affiliate link, and  remember, using our link will not add one penny to your purchase, plus we will receive a small commission which over the course of a year adds up to enough to by a tank of diesel for which we thank you very much!
Posted by Whatsnewell at 8:20 AM