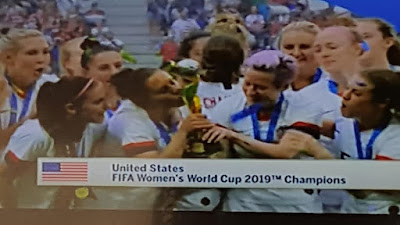 We're kind of into a routine weather wise right now.  For the past week we wake up, open the curtains and find our world enveloped in a heavy marine layer.....no sun.  Sometimes we get a little sun shower in the middle of the day, but overall it is overcast.  In the overall scheme of things it is one of the upsides we are coming to love about Coastal Oregon in the summer.....cool temperatures.  There are many places across the country where these kind of temps are found in the summer, but many parts are baking in triple digit temps day after day.  Redding, CA, where we were two weeks ago, hasn't had a day under 100° F in those intervening days.
Tuesday I worked alone, as I always do.  I began my day by taking the Stihl string trimmer and blower down to the beach path on the ocean side of US-101.  It took me about an hour to clean it up, and then I was back to the tent sites to trim around the sites I mowed a couple of weeks ago with the riding lawnmower.  By the time I finished those sites it was noon, and time to run through all the 'check-in' sites of which there were just 10 Tuesday.  Those 10 took up the final hour of my three hour shift, and then it was time to head for home.
I was able to watch almost 1/2 of Stage 10 of Le Tour de France before I went to work, and immediately settled in to watch the final two hours of a mostly flat stage (no mountain climbing on this day) to see if Mark Cavendish could win the 33rd stage of his career at the advanced age (for cyclists anyway) of 37.  Due to injuries and declining skills he had not ridden in the last 3 Tours, and it seemed that the 30 stage wins he had as of 2015 would be it for him.  He wasn't even chosen to be on a team a few days prior to the start of this years Le Tour, but an injury to a key rider for his team gave him an opening.  So far he has 3 stage wins this year, and it is possible he may surpass Eddy Merckx before the end of this year's Tour.  Eddy Merckx (pronounced Merks) holds the all time record at 34 stage wins in Le Tour, a record which has stood since 1978.  It was a very exciting final 10 miles with Mark Cavendish prevailing in the final sprint to the finish line to come within one Stage win of tying Eddy Merckx's long standing record.
As the cloud shrouded sun slid towards the western horizon Tuesday it began to drizzle, and as far as I can tell it drizzled all night.  How fortunate it is that I spent time washing the VW this past weekend, and just cleaned off the salt residue from the front windshield of the Newell Tuesday afternoon......the downside of Coastal Oregon.....lol!
Thanks for stopping by!
When you shop Amazon, please use our link (below) to access their website.......we will appreciate every purchase you make using our Amazon Affiliate link, and  remember, using our link will not add one penny to your purchase, plus we will receive a small commission which over the course of a year adds up to enough to by a tank of diesel for which we thank you very much!
Posted by Whatsnewell at 8:32 AM