When being a nomad can be challenging...... 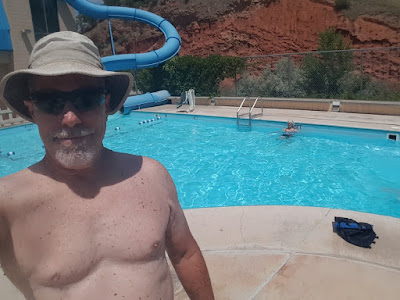 It's been close to 3 weeks since I was able to mow and trim sites A-1, A-2 (our site), and A-3 as there have been many other things requiring our attention in the park, but Wednesday I would not be denied.  I began by mowing all three sites, them using the pole trimmer cut back the hedges surround the sites....it's been about 6 months since I did that....then using the Stihl string trimmer cleaned up all the borders.  It took me just shy of 2 hours to finish the sites, as well as the small drainage ditch between site A-3 and the office along NW Cross Street.  By that time I needed to turn my attention to the ten sites with new customers arriving Wednesday.  I ended up needing to trim the grass in 4 of those sites, and managed to finish by 1 pm.
While I was working on site #21 TLE walked over from the office to let me know I had received the UPS envelope from US Bank with my new debit card.  Why US Bank shipped it to me via UPS Overnight is a longish story, but let me briefly recap.  Every 5 years I US Bank sends me a new debit card, and it was due to be renewed in June of this year.  Knowing they would mail the card from Fargo, SD to my home address in late May, or early June, and that it would take 17-21 days for it to be forwarded to me here in Seal Rock, OR via the USPS I called them, proactively, in late April, to ask them to mail it directly to me in Seal Rock.  TLE had done this and it all worked out well.....not so much for me.
Around June 6th I had not received it so I set up an appointment for a 'Banker' to call me at 3 pm the following day using their online system.  Well, there I was sitting in my recliner with my phone in my hand at 3 pm on June 7th waiting for a call that never materialized.  I finally called them, and waited for about 20 minutes to be connected to a banker.  I told them my problem, and they checked the system to find my card was issued sometime in the 3rd week of May, and not mailed until June 1st.....to my SoCal address....doh!  They said there was no record in the system of my phone call in April....what the?  Since it had only been 7 days since it was mailed I notified my son to check the mail over the next week to see if it arrived.
On June 22nd with the card still not arriving in SoCal I called the bank again.  I talked with another very pleasant 'Banker' who assured me the card would be sent to me via UPS the next day (the 23rd) and I should have it by the 25th, the day we would be in Redding, CA.  I let Terry and Michele know I was expecting the delivery, but it never arrived.  On the next Thursday (July 1st) I called US Bank again....to say the least I was a little upset, and let them know.  The very nice 'Banker' advised me it would be mailed the next day, but I said that was not acceptable....I wanted it sent via UPS Overnight to my address in Seal Rock, and that I wanted the tracking number.  They advised they would have to pass this up the food chain to a supervisor who had the authority to send it via UPS Overnight.  They assured me the supervisor would call me back within 2 hours, and guess what?  I did receive a call from Matt who advised me he was authorizing the UPS Overnight, and that I would receive it by Tuesday, or Wednesday.  He advised I would get a call back by Monday with the tracking number, and that is exactly what happened, and by Wednesday, as I just reported, it arrived.....what an ordeal!
At any rate I wrote that to say this.....sometimes being a nomad adds additional challenges to the living of life.  Sometimes having your mail forwarded can be an issue.  To be clear, none of this was my son's fault, but a breakdown in service at my bank.  As I told Matt....'All's well that ends well".
After arriving home from my 3 hour shift I resumed the watching of Le Tour de France to see if Mark Cavendish would survive the excruciating mountain leg which saw the riders do over 15,000' in elevation gain....mountain riding is not Marks' specialty, and there was concern that he would not arrive at the finish line within the allowed time....as it turned out he finished with 7 minutes to spare, and will live to sprint another day...will he get his 34th Stage win?
Thanks for stopping by!
When you shop Amazon, please use our link (below) to access their website.......we will appreciate every purchase you make using our Amazon Affiliate link, and  remember, using our link will not add one penny to your purchase, plus we will receive a small commission which over the course of a year adds up to enough to by a tank of diesel for which we thank you very much!
Posted by Whatsnewell at 8:24 AM