There were two things high on our list of "must do's" on First Saturday......dump the black tank (it was FULL), and then turn off the water so TLE could spend some time cleaning off the "ball seal" in our Dometic toilet.  Lately (since just before we left SLT*) the bowl has not been holding water and one of the symptoms is a dirty seal (the other, which we were hoping was not the case, is you need to install a new seal).  It is not one of TLE's favorite things to do, and frankly I'm not sure this task appears on anyone's list of favorite things, but it has to be done at least once every 6-8 months.  It really depends on how "hard" the water has been.  Hard water results in a build up of calcium deposits that create unwanted friction and keeps the seal from "sealing" as it should.  It took her about 30 minutes to clean the seal, as well as the individual water inlets that allow water to flow into the toilet, but the end result was we do not need a new seal......the bowl now holds water!  After she was done I applied some "plumbers grease to the bottom of the seal, and then sprayed some silicon on the top of the seal to rejuvenate it a little.  Once those "fun" things were checked off our "to do" list we had time for some fun stuff.....

The rest of Monday was dedicated to doing some local exploring of a couple of historical sites.....The Hughes House right here in Cape Blanco, and the Port Orford Lifeboat Station Museum in, of course, Port Orford (the oldest town on the Oregon Coast).  The Hughes House is about 1 mile as the crow files from our campsite, so we stopped there first on our way to Port Orford.

Just like the lighthouse, volunteers provide tours of The Hughes House.  We learned that the Patrick Hughes family settled in Cape Blanco in 1860, and by 1898 had saved sufficient funds from their dairy farm to build this Victorian home which has over 2,000 square feet of living space.  We thoroughly enjoyed the tour and were very impressed with the state of the art appliances and systems that were installed in this home before the turn of the century.  Most notable was indoor plumbing, and an indoor toilet. 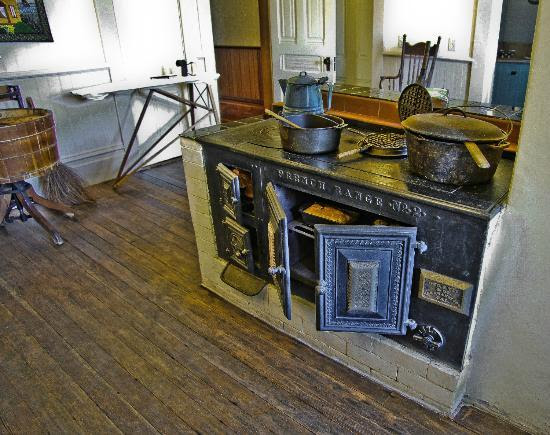 We spent close to an hour with a rather large group of people who had come for the tour before continuing into Port Orford for lunch, and a tour of the Lifeboat Musem.  We chose Redfish as our lunch destination, and are glad we did.....Yelp, Tripadvisor, and Urbanspoon give ratings of 4 to 4.5 stars (scale of 1-5) and we would totally concur.  We found a corner table......the photo below is from the Redfish website, and this actually was "our" table for lunch!  We arrived around 12:30 and were shown immediately to our table.

We ordered the Ceviche appetizer which came with fried plantains.....exquisite!  For our entrees I ordered the BLT & Bleu salad (basically a BLT with a sprinkling of blue cheese without the bread....yummy!), and TLE had the Fish Tacos.....also delicious......we basically ate of each others plates.  The ambiance and service were both above average. 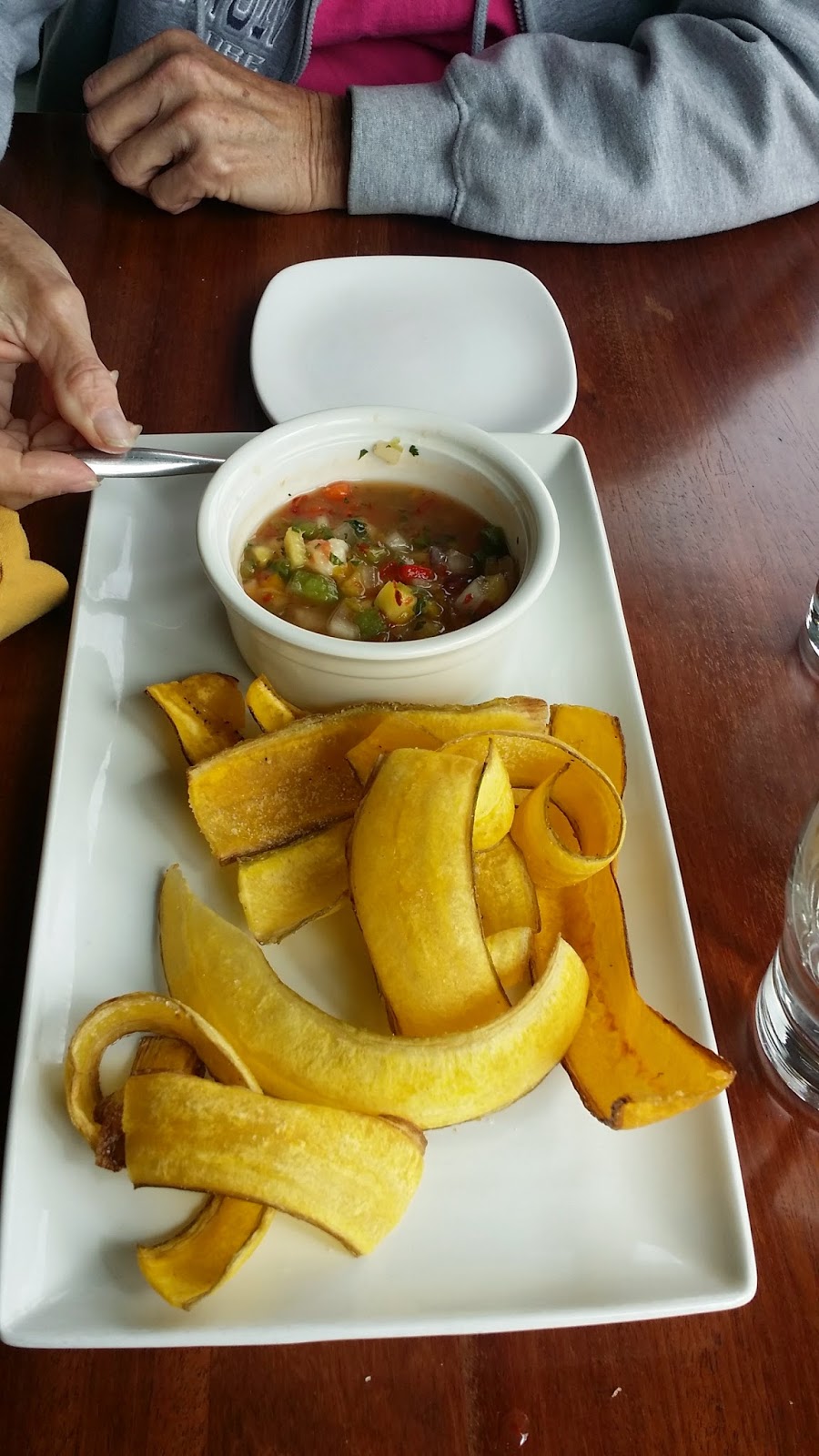 The view from the Redfish parking lot

Next up was the Port Orford Lifeboat Station Museum, which was just a couple of miles from the restaurant.  This lifeboat station was established in 1934 and served as a rescue station until 1970 when it was decommissioned.  Over the years they rescued scores of people from boats and ships in distress.  Their motto was "You have to go out....you don't have to come back". 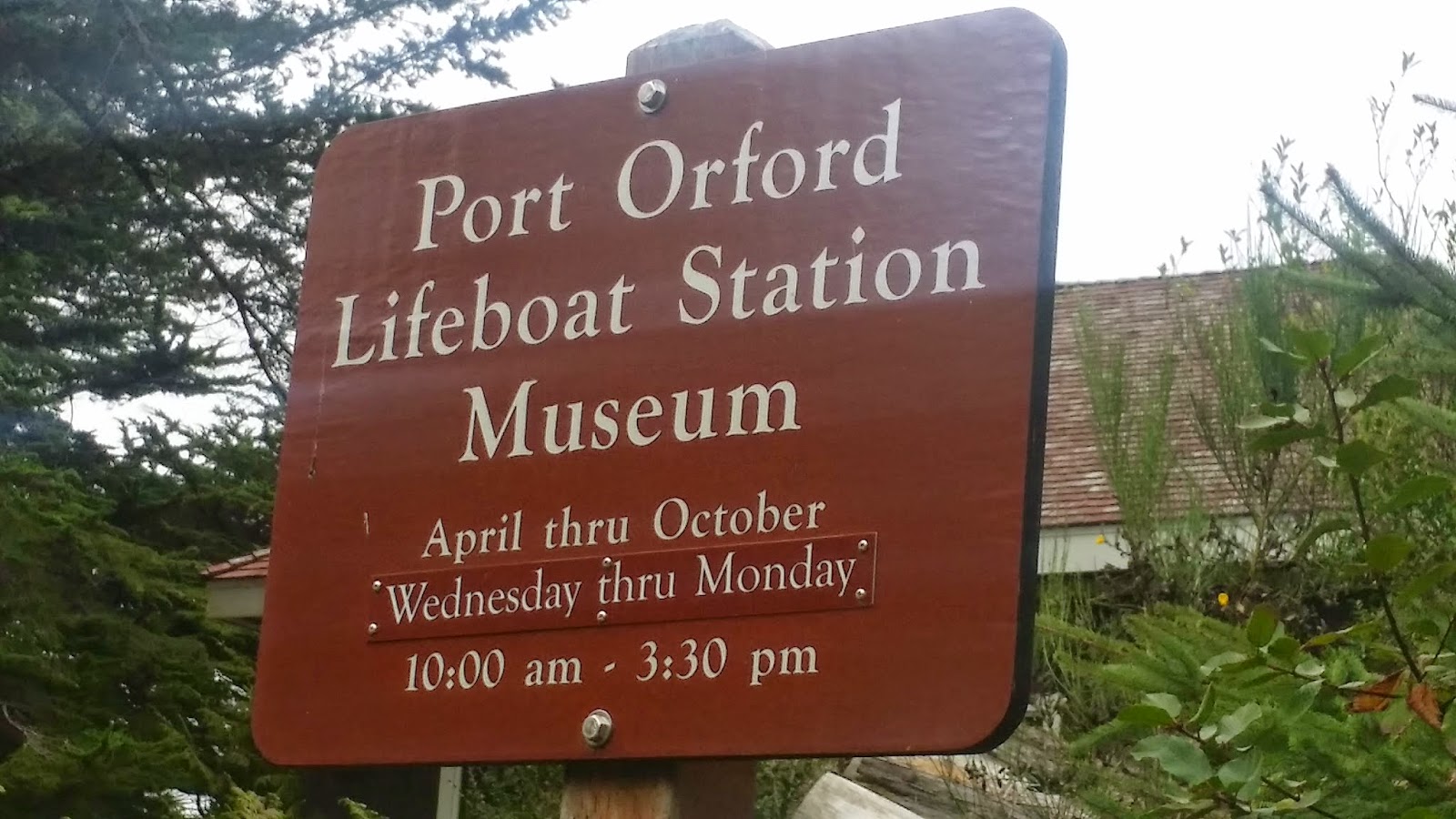 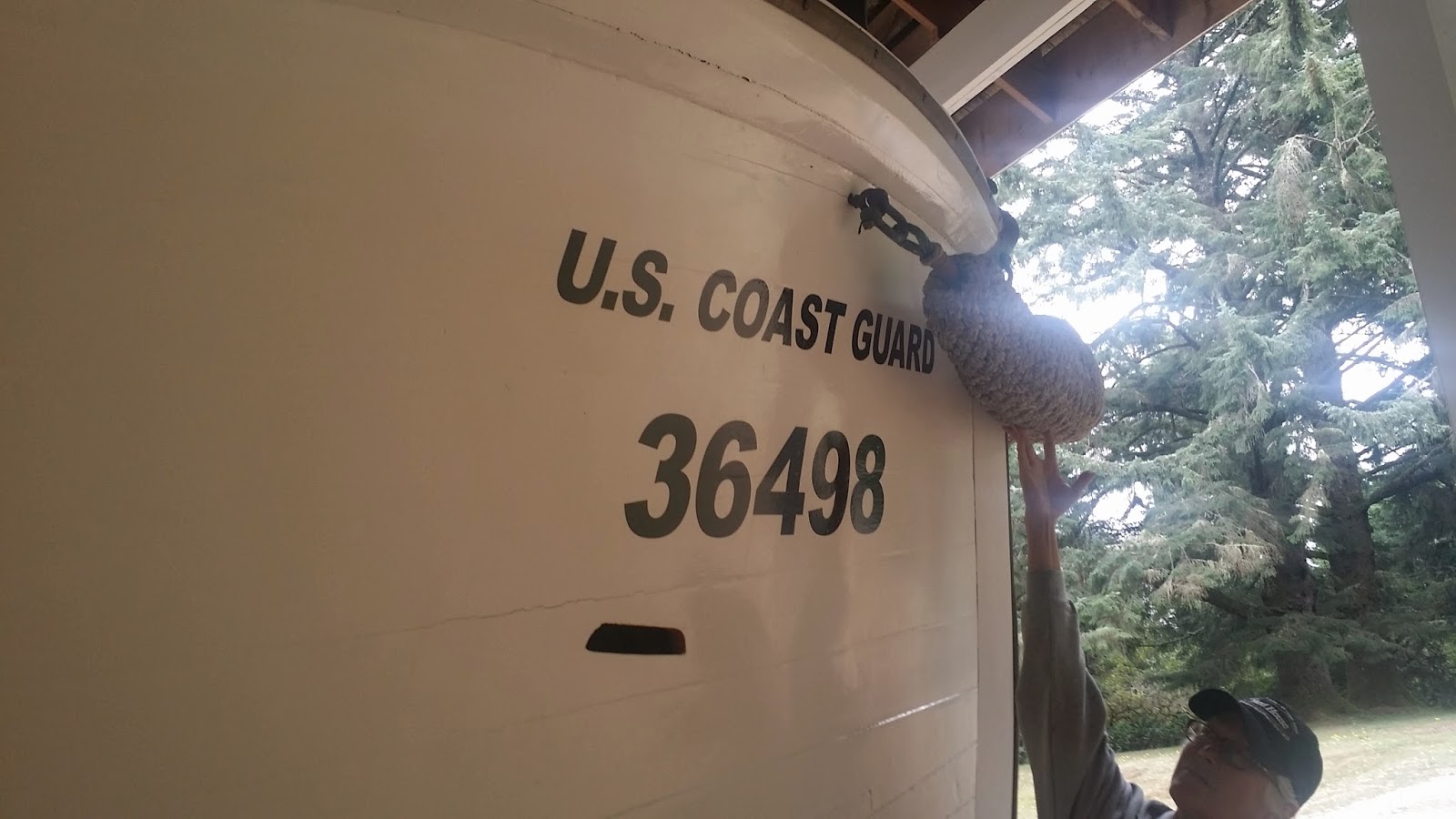 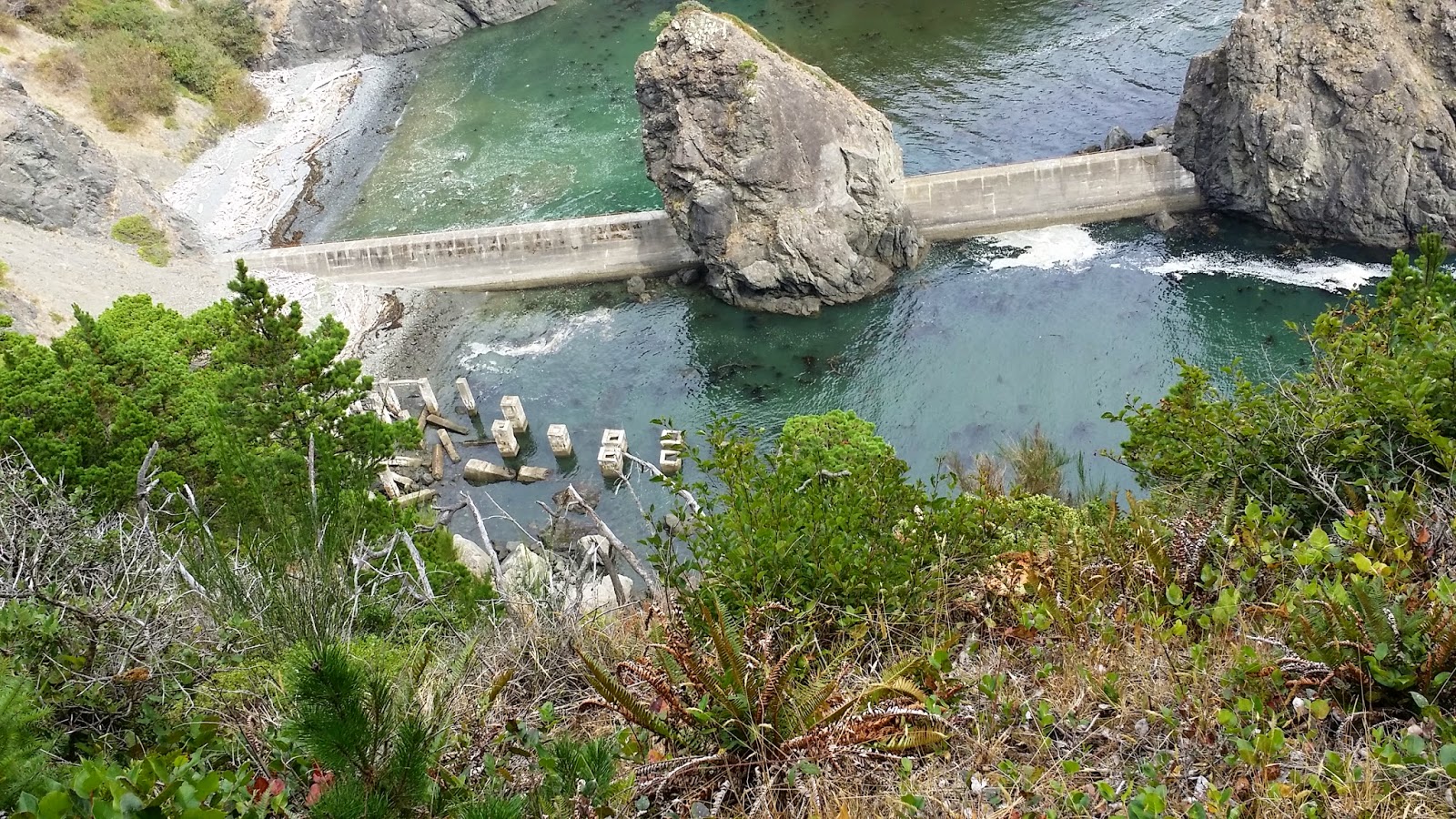 Nellie's Cove where the lifeboat "garage" was....now
in ruins as a result of a fire many years ago.

After spending time with our volunteer tour guide (Jeff) going through the many exhibits we decided to take a hike on the "Cove Trail" which meanders along the point where the lifeboat station is for about 1.5 miles....the views were as you might expect. 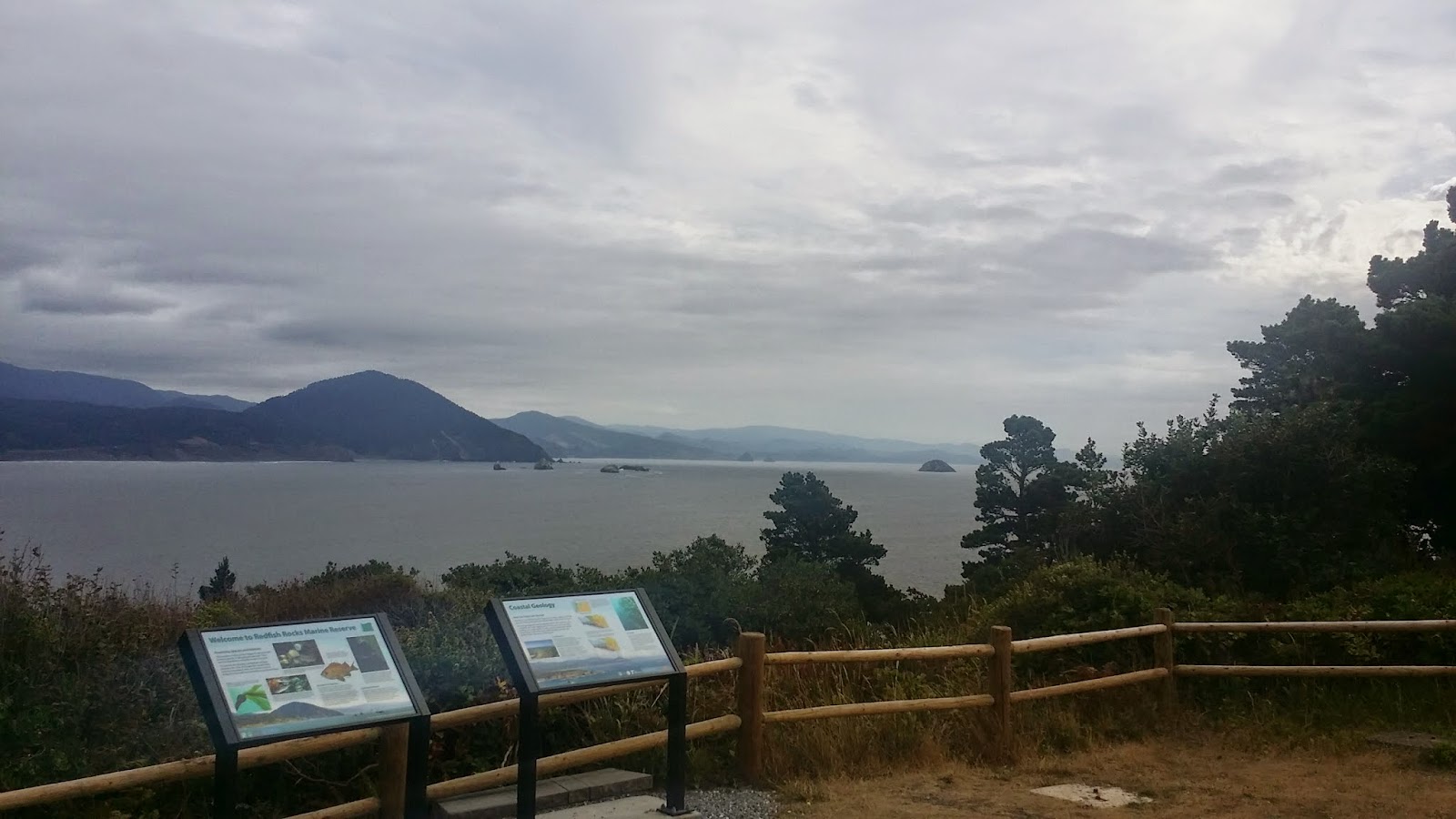 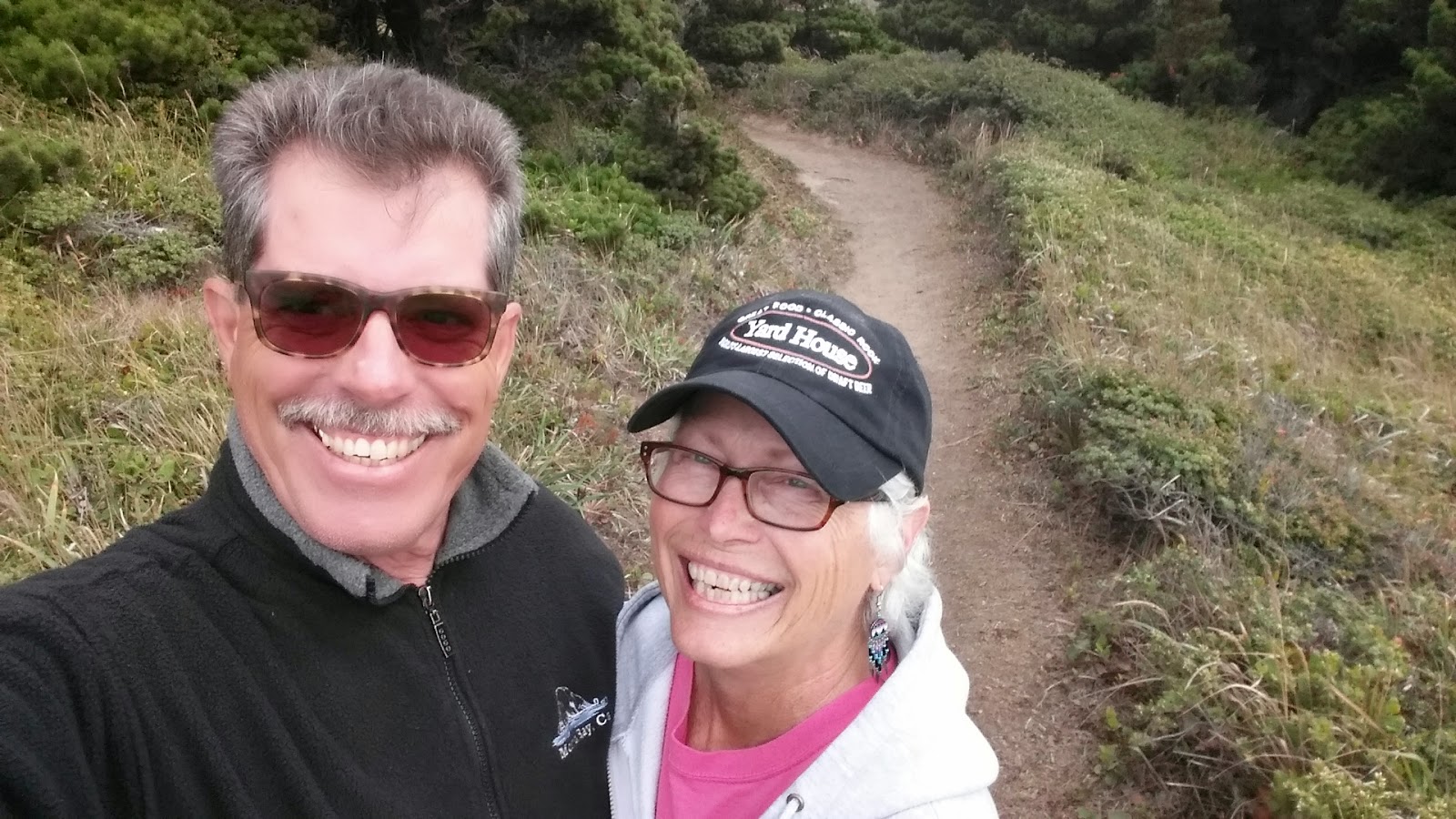 We finished our hike around 3:15 and headed back into town to do some "small" shopping at Ray's before arriving home around 4 pm.  Prior to the start of MNF** I took some time to take the trash to the trash can, vacuum out the VW, and clean some old pine sap (from our days in SLT no doubt) before retiring to the coach to watch some more football.....yep, it was another great day!

Posted by Whatsnewell at 8:48 AM