As of Monday we had been in Cape Blanco 12 days, and neither of us had ridden a bike one inch.  Well Monday was my day to ride......I spent Sunday morning getting my mountain bike ready to ride in anticipation of  being off work Monday.  There are a lot of "single track" trails all over Cape Blanco.....we walk one of them to work (Cape Trail).  I was determined to spend a couple of hours exploring some of them.

The weather first thing Monday morning was cold, damp and breezy so I got out my winter riding clothes and then set out to do some exploration.  The first trail I chose to explore was actually the paved road that goes by our host site, and then down the hill to the beach.  The road descends quite abruptly and is about 1/4 mile long averaging about a 7-8% grade.  Within seconds I was at the turn around, took a couple of pictures and then began the climb to the top. 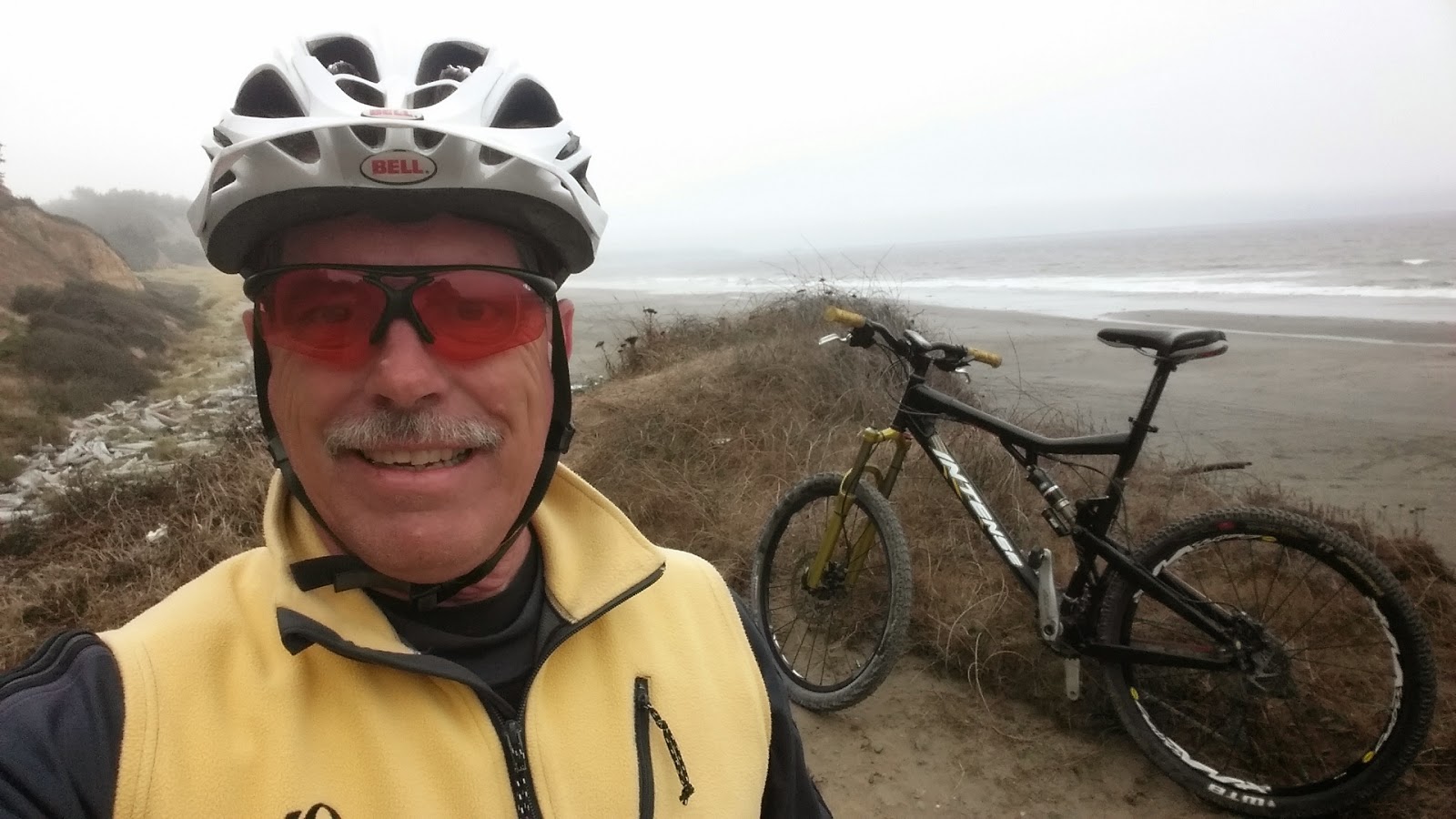 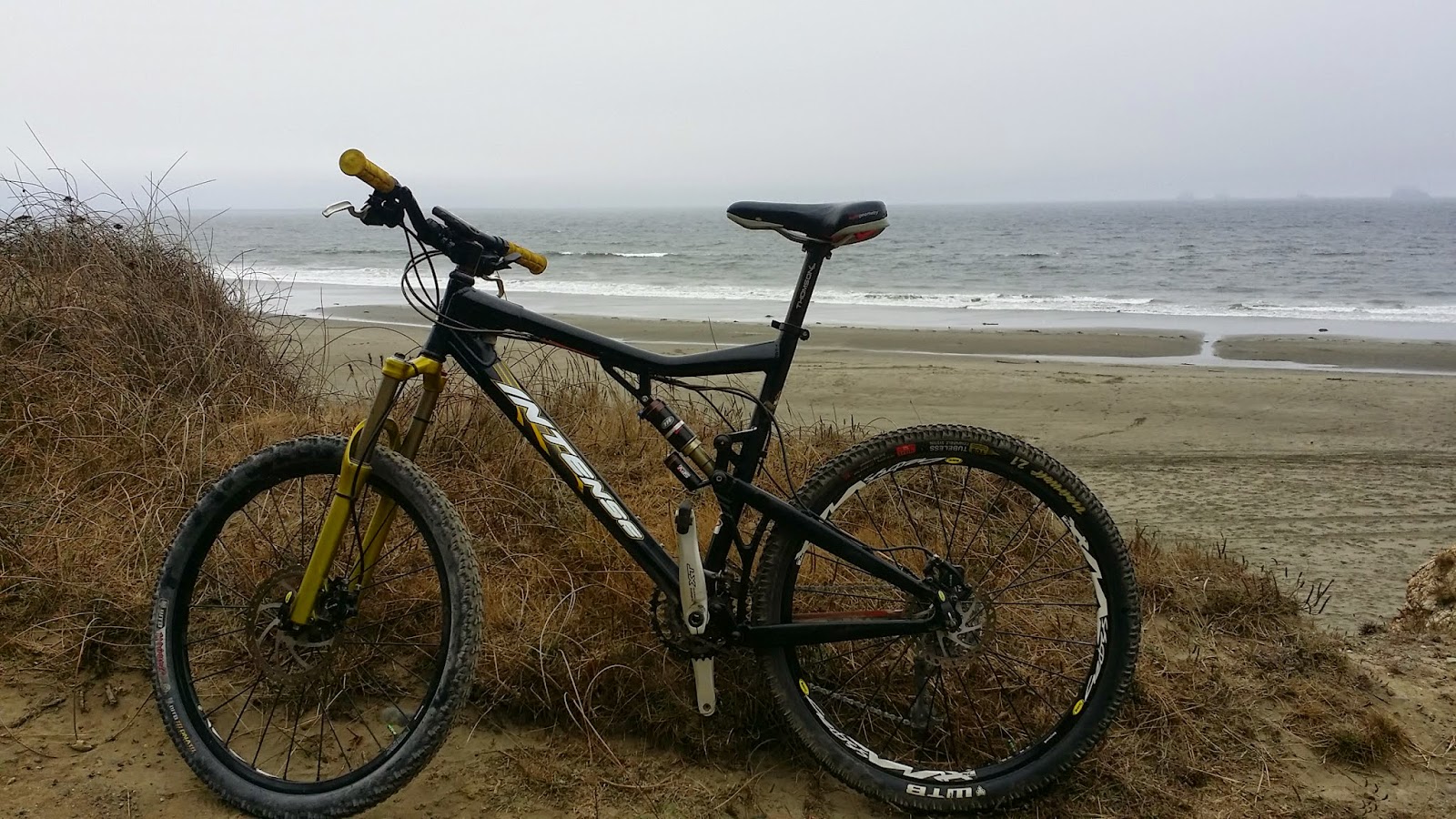 At the bottom.....that road is steep! 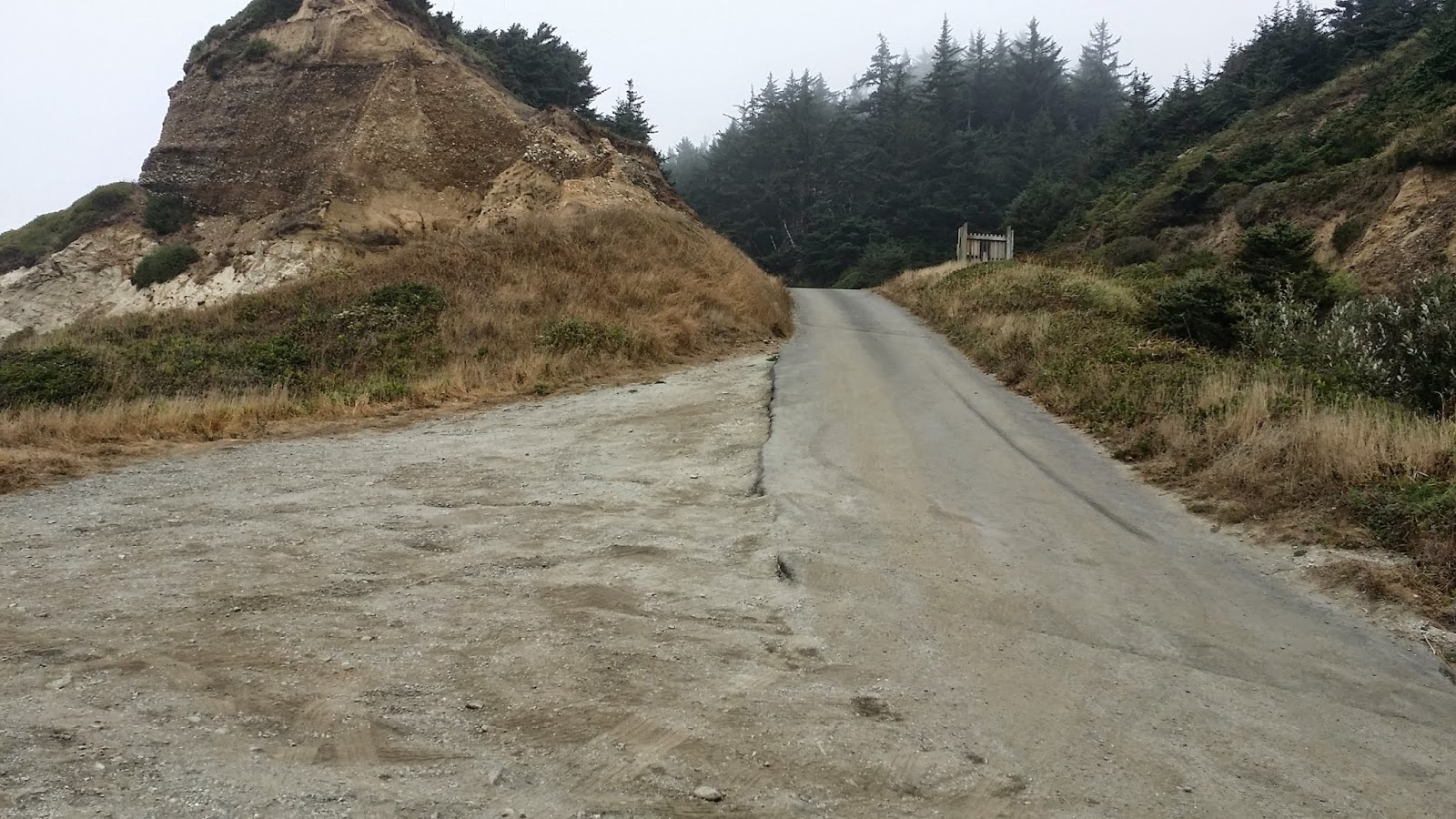 At the top I took a left and picked up the Cape Trail to ride over to the lighthouse......as I came out of the forest I was hit with a blast of cold wind which made me happy I had on my winter riding duds.  Since I have walked this trail multiple times I was familiar with it, and it actually rides better than it walks......a lot of this section of trail is uneven and lumpy requiring that you look down continuously as you walk to avoid stumbling.....riding it on a full suspension bike takes all the lumpiness out of it.

After making the turn around at the lighthouse  re-entered the trail to ride back and then picked up the dirt road just past the host campsites to ride out to the main road and then turned left for a 1/4 mile where I turned right picking up the Coastal Trail......this was a new trail to me, and I loved it!  It winds along the bluffs overlooking the ocean weaving in and out of the forest finally ending at a scenic overlook. 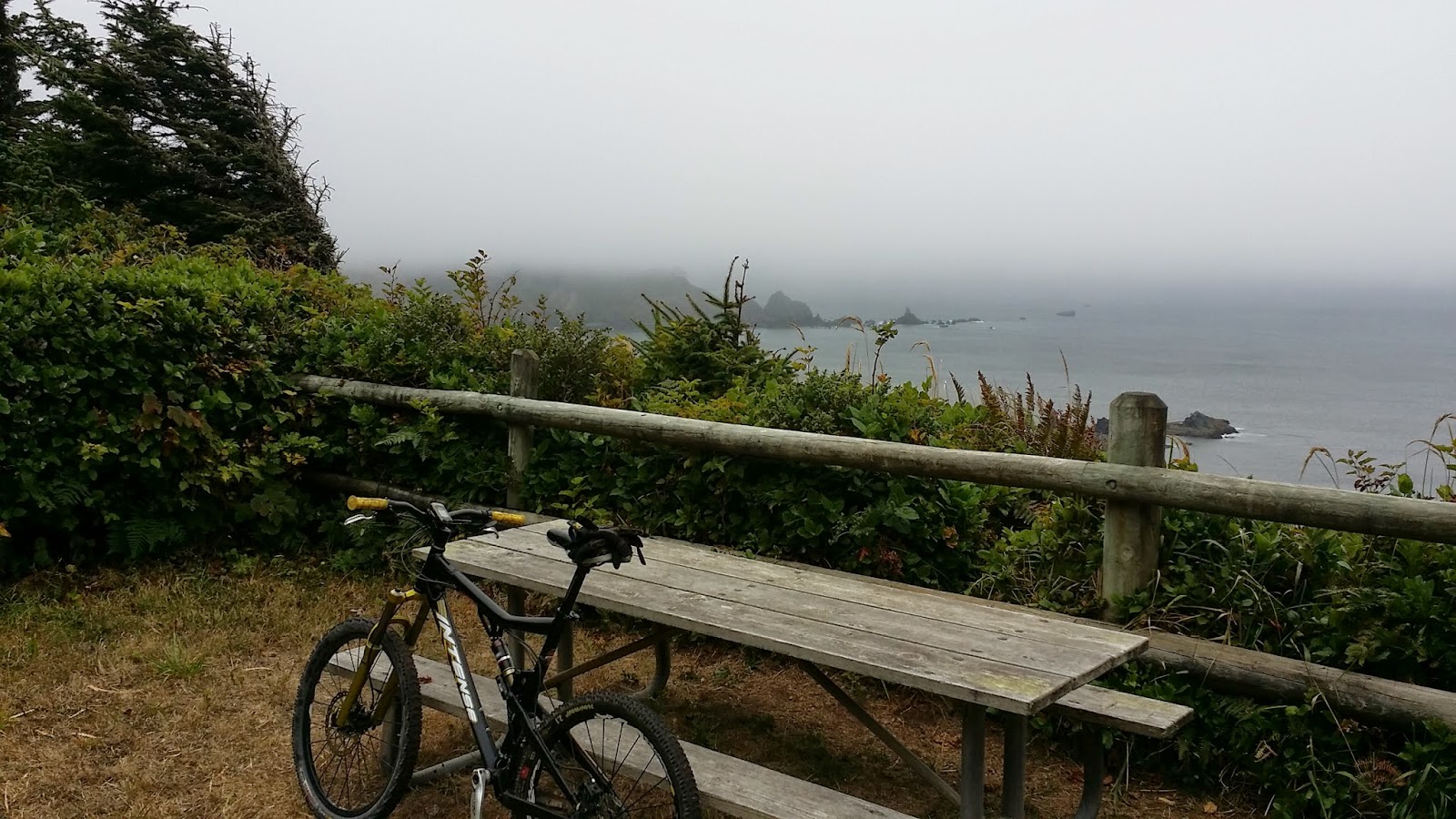 The lighthouse is totally obscured by the fog bank

In all I covered about 9 miles, of which 7 were single track and/or dirt road, working up a good sweat over almost two hours of riding.  I passed up numerous other trails on my ride, and will definitely make a point of exploring them my next time out. 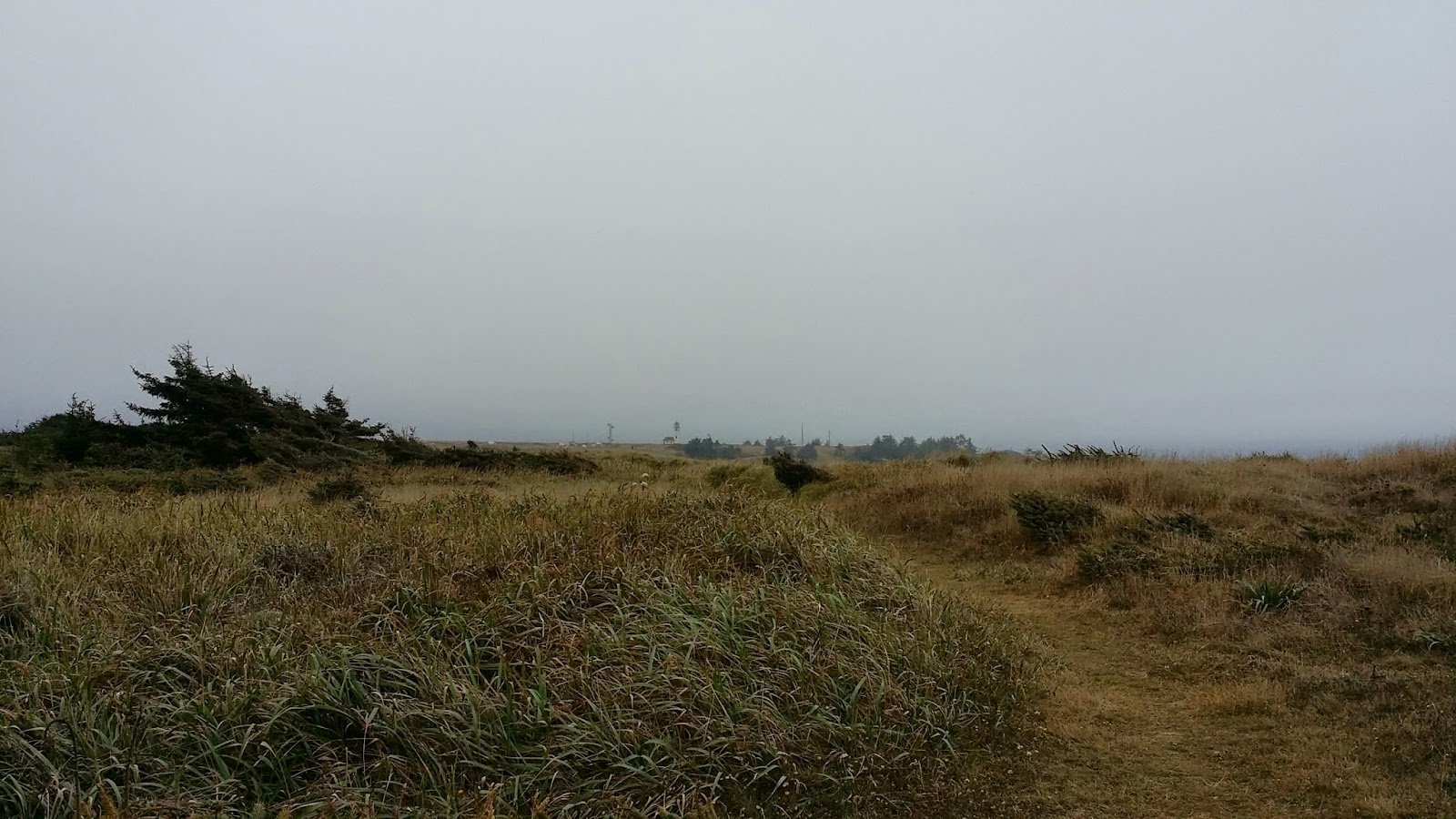 Just after I arrived home TLE informed me she was going to drive into Port Orford to Ray's Food Place to pick up a few items she had forgotten when we were in Bandon Saturday, so while she headed out I took a shower, and then sat down to finish a good book I had started reading a week, or so ago.

As I read I would occasionally would look up to see the fog wafting through the trees as it rolled off the ocean to the sound of moisture from the fog dripping from the trees on to the aluminum roof of the Newell.  It was a perfect afternoon for being inside reading a good book while the electric heater hummed in the background.

Just after TLE returned the skies began to clear and by late afternoon you could see the ocean and rocks just off the coast once again.

Another thing I love (and don't we all) on these kinds of cold, blustery days is the smell of pastry baking in the oven......the items TLE drove into Port Ordord to buy were needed to make cranberry scones with the fresh cranberries we had purchased in Bandon at the Cranberry Roundup.  They turned out to be very tasty and I'm somewhat amazed I was able to resist eating more than 4 of them at one seating!  As they sat there on the kitchen counter cooling the aroma was almost overwhelming, but some how I resisted eating all of them.

Around 5 pm Greg, the ranger, knocked on our door with a couple of packages I had ordered from Amazon......one of them was the new Winegard Carryout G2 portable satellite dish.  I ordered it on Friday afternoon, and it was here all the way from Campbellsville, KY by Monday afternoon......amazing!

Thanks for stopping by!
Posted by Whatsnewell at 9:20 AM