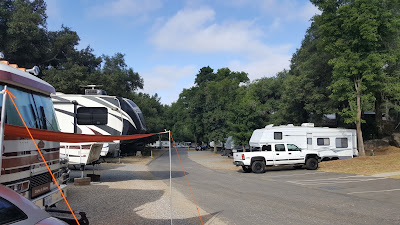 Sunday began cool, and remained cool all day long.  I was still wearing my hoodie in the middle of cleaning the pool area.  After four days of heavy usage it needed a good vacuuming.  Of course, all the while the USA women are playing the Netherlands in the FIFA Women's World Cup final in Lyon, France.  Both TLE and I wanted to watch the game from beginning to end not knowing the final score, and that would not be until after 2 pm....the game began at 8 am Pacific Time so we had to avoid all sources of news for over 6 hours.

As is my custom, and as I just mentioned, I vacuumed the pool Sunday morning.  While I was about this task I received a call from TLE on the 2-way radio asking me to come down to the office.  I left off vacuuming about 1/2 way through the pool, locked the gate and drove down to the office.

When I entered the office TLE handed me a type written letter from Rich.....at first blush I thought it was a resignation letter, but I was wrong.  It was an incident report from Saturday night/early Sunday morning hours.  Apparently on Saturday night a couple of our male customers decided to tie one on and were being quite noisy, playing music loudly at 2 am.  He attempted to quiet them, but they became belligerent, making threatening comments so Rich called in the San Diego County Sheriff to remove them from the park.  By the time they arrived it was 3 am.  The Sheriff was able to get them to be quiet, and go to bed, but they were told to be out the park before 11 am Sunday.....and they were.

This is the first time we have had an incident such as this since we were at Tahoe Valley Campground.  Law enforcement in California is reluctant to make drunk people drive their RV's out of an RV park....understandably....so they asked Rich if they could wait until morning to leave, and he agreed.  There was no further incident, but it is disappointing it happened.  At any rate, due to being up virtually all night Rich and Marnie did not come to work until noon.

I returned to the pool to finish cleaning the vacuuming, and after that blew the eucalyptus leaves off the mini golf holes once again, and then it was lunch time.  By the time TLE and I took lunch it was 12:15 pm, so when we returned at 12:45 pm we only had one hour and fifteen minutes left to quitting time at 2 pm (Sunday is our short day).  The rest of the day went quickly, and we were soon home setting up the outdoor TV to watch the FIFA Women's World Cup final.

I expected this to be a close game, and score wise it was, however, the USA dominated the Dutch team, and could easily have score 4, or 5 more goals than they did.  The final was 2 to nil, but it was not even that close.  The USA Women's National Team is still the best in the world by a long shot, but the competition is getting closer....... 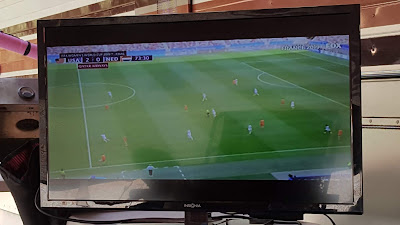 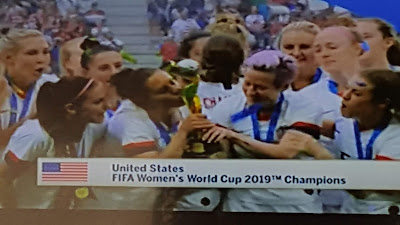 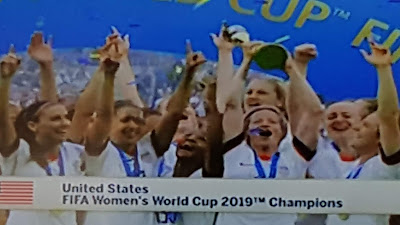 .....by the time we finished watching the entire match, and all of the talking head comments after the game it was closing in on 5 pm.  After watching soccer almost every day for the past month there will be some minor withdrawal pains to be sure.  Now to get into Le Tour de France!

When you shop Amazon, please use our link (below) to access their website.......we will appreciate every purchase you make using our Amazon Affiliate link, and  remember, using our link will not add one penny to your purchase, plus we will receive a small commission which over the course of a year adds up to enough to by a tank of diesel.

Posted by Whatsnewell at 9:11 AM