Tuesday was a continuation of Monday's 'Santa Ana' condition, only a few degrees warmer.  I began my day taking care of the pool, which had a lot of large leaves on its bottom, plus a lot of floating debris leftover from the winds on Monday.  It was after 10 am when I finished the pool, at which time I joined Rich and Alika out at the entrance to the park to help them cut down some brush that was blocking the view of people exiting the park.  We worked until almost 12 pm clearing that brush.  Just as we were finishing Rich pointed out some poison ivy, and then we began to look around finding more poison ivy.  Uh oh!  Rich and I headed immediately to our RV's to take our clothes off and take showers, while Alika headed to his home in town to do the same.


'Poison Ivy' by the Coasters

Years ago I was exposed to poison oak in a serious way, so I was concerned about this exposure to poison ivy. Fortunately, taking a shower and removing our clothes seems to have worked as no one is breaking out in a rash.  TLE took my clothes in a bag over to the laundromat to wash them, and I changed into a new set of clothes before returning to work at 1 pm.

I spent the rest of the day taking about 8 sections of fencing down behind cabins 64 & 65, and then time digging 5 post holes.....there were a few large rocks..... 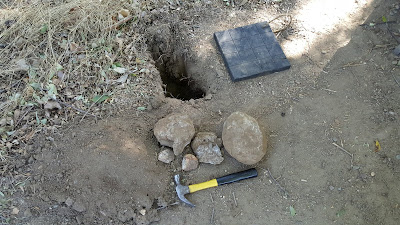 .....these 'doll head' sized rocks came out of the post hole in the background......why me?  Once again, it appears that whomever dug this post hole years ago quit when they hit these rocks, and just inserted a shortened post.....¡no bueno!

It took me until 3:30 pm to finish digging the post holes.....spent the balance of my shift hauling 16 split rails and the six remaining posts down to cabin #65 in preparation for their installation Wednesday when I reassemble these 8 sections of fencing.

The heat (temp got to 96° F, or higher) really took it out of me Tuesday.  By the time I took my second shower of the day and made my way outside to my anti gravity chair I was ready to take a nap, which is exactly what I did.  With the sun much lower in the horizon as it makes its way towards the winter solstice the heat leaves the air quickly each day, and we were back inside a little after 6 pm.

We watched game #1 of the Fall Classic (World Series) featuring the Washington Nationals at the Houston Astros.  The Astros' #1 pitcher, Gerrit Cole, who had not lost a game since late May (had won 19 in a row entering this game) finally lost a game as the Nationals held on to win game one 5-4.  All indications were that Cole would win his 20th in a row, but that is why they play the games......you just never know, right?


When you shop Amazon, please use our link (below) to access their website.......we will appreciate every purchase you make using our Amazon Affiliate link, and  remember, using our link will not add one penny to your purchase, plus we will receive a small commission which over the course of a year adds up to enough to by a tank of diesel for which we thank you very much!
Posted by Whatsnewell at 8:01 AM