We had originally planned to pull anchor to travel down to Ocotillo Wells to welcome in the New Years next week with some of our kids, but since New Years was on a Wednesday this year, along with Christmas, and the kids were already off work after Christmas, and not after New Years they decided to head out to Ocotillo Wells on Friday.  We were down when we thought it would be a 4, or 5 day deal, but tearing down everything to be only gone for two nights is a lot of work for us, so we decided to just drive down to Ocotillo Wells for the day to spend time with the kids, and my brother Philip, and his wife Jeannie.

There was an ample amount of frost covering the front and rear glass on the VW when we were ready to leave a little after 9 am, so we had to deal with that first before we could drive.  It's about 70 miles to Ocotillo Wells, and our drive would take us through Warner Hot Springs, Ranchita, and finally Borrego Springs.....one of our 'happy places'.  Along the way we came to the overlook just as you begin the long descent into Borrego Springs...... 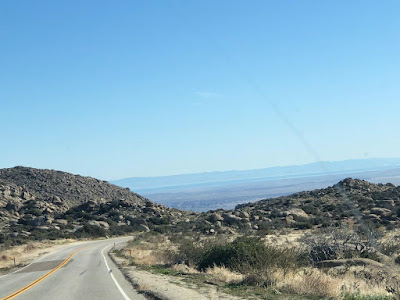 Beginning the downhill into Borrego Springs 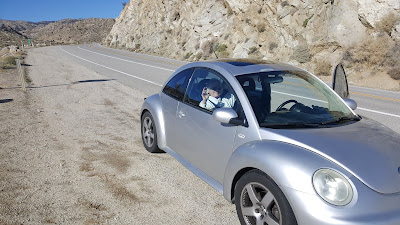 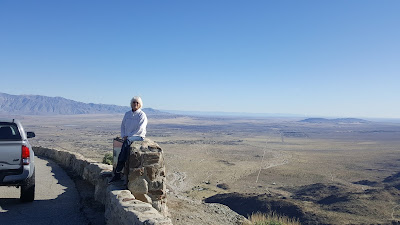 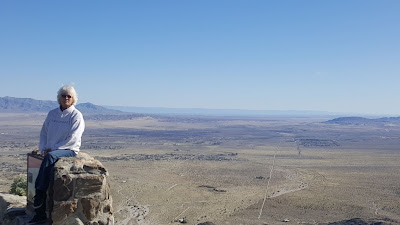 We could see the Salton Sea from this overlook, but
in the picture it looks a little fuzzy on the horizon 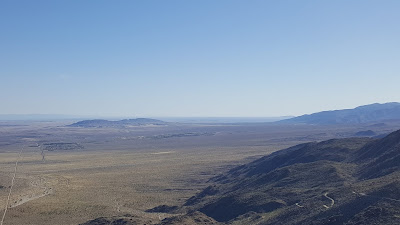 .....the view, which we have enjoyed several times over the years, is breathtaking on a clear day, which we had on Saturday...... 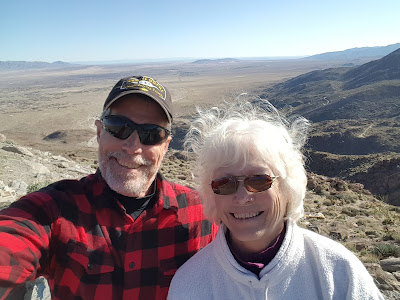 .....I had chosen to wear my UnderArmor shirt along with one of my favorite flannel shirts, but by the time we arrived in Borrego Springs I could tell it was going to be warmer than I expected.  One of our favorite thrift stores, The Frugal Coyote, is in Borrego Springs and I was sure I could find an inexpensive short sleeve t-shirt there, but first we parked on Christmas Circle (round about) to use the very nice public restrooms before walking into town...... 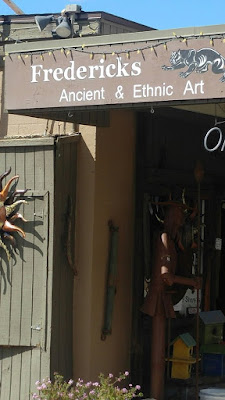 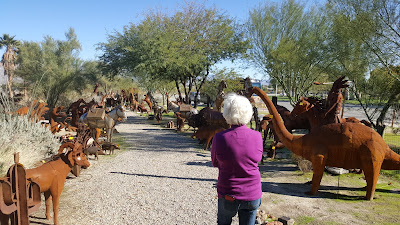 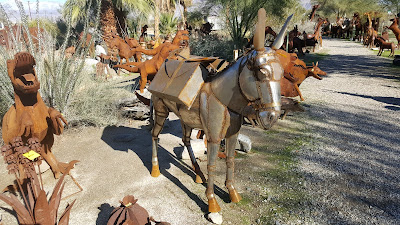 .....the prices for this objects of art were really, surprisingly, quite reasonable.....if we still lived in a 'sticks and bricks' home I would be tempted to buy a few.....lol....... 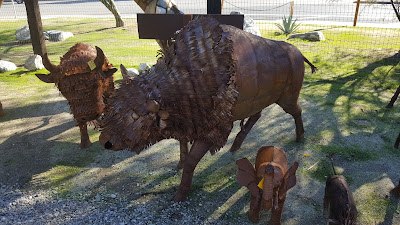 .....these are miniatures of the metal sculptures found in the area around Borrego Springs, which we wrote about here back in February of 2017........ 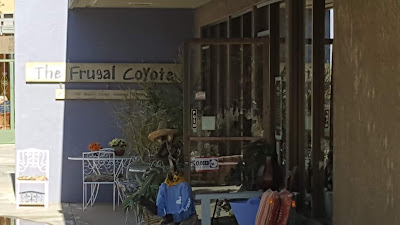 .....next up was The Frugal Coyote where I did find a black t-shirt for $4.....TLE found another flannel shirt for her collection.  After paying for our finds we decided to walk next door to the Bighorn Fudge Company to buy a couple of cups of coffee, sit outside for a while enjoying the high desert air. 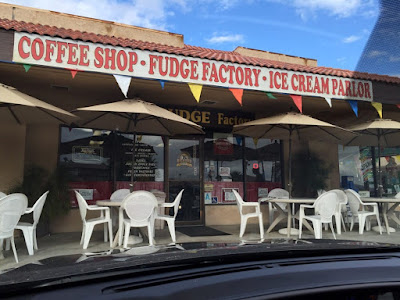 We arrived at our kids' desert encampment a little after 12 pm, and enjoyed the next few hours playing games (beer pong mainly) with them before heading back home around 3:45 pm...... 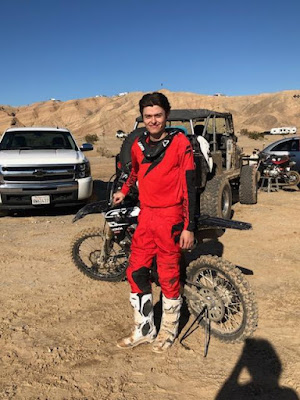 My oldest grand child, Chris who at age 19
has become quite a handsome young man

......leaving before 4 pm enabled us to make 95% of the drive home before it got too dark.  We made really good time, and arrived home just before 5 pm.....just in time for the kickoff of the second semi final bowl game between #3 Clemson Tigers and the #2 Ohio State Buckeyes to see who will face #1 LSU in the final on January 13th.  For the record #1 LSU had easily dispatched the #4 Oklahoma Sooners earlier in the day 63-28, and it wasn't really that close.....LSU scored 49 points in the first half.....all touchdown passes.

The game between Clemson and Ohio State was all that it was hyped to be.  Initially Ohio State got out to a 16-0 lead, but Clemson fought back scoring two late touchdowns before half time to trail by just 2 points as the half time gun sounded.  They went ahead in the 3rd quarter 21-16, but then Ohio came back to lead 23-21 as the 4th quarter was winding down.  Clemson got the ensuing kickoff at their 6 yard line and then proceeded to drive down the field in 4 plays to score a touchdown, and with the two point conversion went up 29-23 with 1:49 left on the clock.  Ohio got down inside Clemson's 25 yard line with 45 seconds to play, and then on the very next play the Ohio State quarterback threw an unfortunate interception which effectively ended the game, so Clemson will now advance to the final game on January 13th to play LSU....what a game!

When you shop Amazon, please use our link (below) to access their website.......we will appreciate every purchase you make using our Amazon Affiliate link, and  remember, using our link will not add one penny to your purchase, plus we will receive a small commission which over the course of a year adds up to enough to by a tank of diesel for which we thank you very much!
Posted by Whatsnewell at 9:12 AM