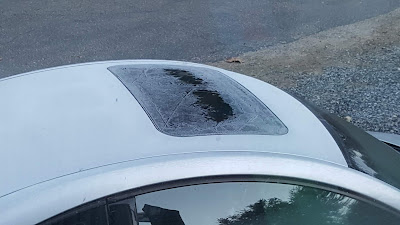 Frost on the VW

First thing Wednesday I headed back to the sewage spill area to wash down the area around the 'cleanout' which I had missed on Tuesday.  In the aftermath of the Santa Ana wind event beginning Monday, and ending Tuesday the pool and Jacuzzi were a mess.  Both had a lot of large leaves which had sunk to the bottoms of each pool.  You can't leave leaves on the bottom too long as eventually they will leave stains in the plaster, which cannot be removed.  So, it will come as no surprise to you that I spent a couple of hours Wednesday removing those leaves.  By the time I put away the equipment the pool and Jacuzzi were looking presentable.  I am sure no one is going to go swimming in the currently 50° F waters of the pool, but it looks much better.

The horseshoe pits had been used over last weekend so I headed there next to rake them smooth and sweep the concrete aprons clear of dirt, then down to the mini golf course to clear the greens of the wind blown debris (leaves, broken branches, and dust) via the hand blower.  By the time I finished there it was time for our 30 minute lunch break.

In the afternoon I spent time raking the pond path free of leaves, as well as sweeping a lot of crud out the shed in the 'backyard' now that there is enough light to see how bad it is in there, hauled that trash, and the trash from the maintenance building trash can to a dumpster, spent more time in the maintenance building labeling some more of the fastener containers as to what the contents are in each (type, size and length), added four thousand gallons to the water tank, and finished by adding a few hundred gallons to the pool.

TLE was off at 3 pm and headed into town to see her chiropractor, and I was off at 4 pm.  I spent time right after I got home setting our outdoor Xmas tree back upon the picnic table now that the winds had abated.  The wind knocked it down on Monday, so we just laid it on the ground until it was over.  And then it was time for the long hot shower which I had been anticipating for about an hour.  While I was in the shower TLE returned from town, and began to prepare an anchovie pizza for dinner.....she make the best anchovie pizza!

Wednesday night was the 2 hour finale of' this season's 'Survivor'.  It came down to the final 3 survivors (Tommy, Dean and Noura).  TLE and I thought Dean would/should win, but in the end he only got two votes.......Tommy got all the rest.  Noura, as we had previously surmised did not get a single vote.  It was the 39th season of Survivor, and it was one of the best so far.  Some how they keep renewing it, and making it fresh, which is why it has been so successful.

When you shop Amazon, please use our link (below) to access their website.......we will appreciate every purchase you make using our Amazon Affiliate link, and  remember, using our link will not add one penny to your purchase, plus we will receive a small commission which over the course of a year adds up to enough to by a tank of diesel for which we thank you very much!
Posted by Whatsnewell at 7:35 AM