This is Cedar Key, right?  It's not supposed to get that cold is it?  I woke up around 7 am and it was just hitting 35 degrees.  Wait a minute.....are we still in Campbellsville, or are we really at Sunset Isle RV Park.......were the last 3 days just a cruel, doggone teasing dream?  I looked outside to be sure where I was, and sure enough I could see the water of Cedar Key across from our site.  I guess Sunday we were still catching the rear end of the front that passed through two nights ago.

The plus to the start of this unusually cold day was that it was sunny, and there were no clouds.  We didn't have much time to set up when we arrived Saturday so I got busy draining the gray tank so we could take showers, and then we unhooked for a few minutes so I could re-position our coach in the site so we had a better view of the water, and could deploy our awning....there was a tall pole in the way.  Once that was done I connected everything again, and then put out our awning mat, and eventually got our LED lights put out again.....now it feels like home again!

Later when it warmed up a little we took the top off the T'Bird, and stowed it in the trailer.  We know there are some warm days coming when it will be nice to put the top down.  We haven't had it down since early November when we drove over to Maker's Mark Bourbon for the distillery tour.

Naturally, it was NFL day so a few football games were playing in the background as we continued to get our camp organized.  It will probably take a few more days to deploy all the  stuff that makes this feel even more like home. 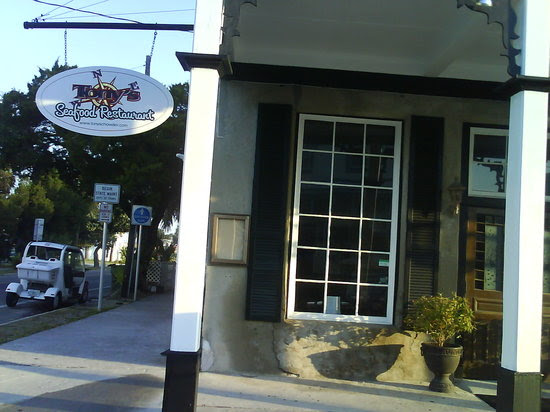 Around 2:30 pm we decided, on the recommendation of our good friend, David Zonker, who was here just a few weeks ago, to go to an early dinner at Tony's Seafood Restaurant and have some of their world famous clam chowder.  They are world famous because their chowder has won the world championship 3 times in a row.  I'm not a big shellfish fan, but this clam chowder was amazing.  We each only got a cup to go along with a fish of the day sandwich, but it was stunningly good, and we cherished every bite.  I will get a bowl the next time for sure.

We arrived back "home" just in time to see that our friends Chris and Cherie (Tales from Technomadia) had arrived, and were beginning to figure out how to get their  35' long, 1961 GM 4106 vintage bus conversion into site #6, directly across from us, but right on the water.  It took a few passes to get the the right angle, but Chris, with Cherie's help on the walkie talkie, maneuvered their coach into the site.

Chris and Cherie's bus, and view

After the successful parking venture we exchanged hugs as Bill and Debby Kasson (Bill and Debby's Wild Ride) came up.  Our Nomad reunion from last year at Cedar Key is starting to come together.  We stood and talked for a while and then Bill suggested we needed to get ourselves over to the Low Key Hideaway Tiki Bar in time for sunset.........we all immediately retreated to our "homes" to change clothes and walk over......it's only 150 yards away....how cool is that to have a great local bar that close?

TLE and I got there just after Bill and Debby, Chris and Cherie followed in short order,  we ordered a couple of Glenlivet 12 year old scotch's on the rocks for ourselves, and then settled in to watch the sun set.   Nothing like a good aged Scotch and a beautiful sunset to cap off a great day 2 in Cedar Key!

The scene changes every minute

There were a number of people out on the dock talking, but as the sun sank, and the horizon turned a glowing red all talk stopped, and just stood there in the moment enjoying the stunning beauty of what we were witness to.

I never get tired of her smile

We took a few more pictures, finished our drinks, and then headed back home feeling satisfied, and very mellow.  I think we have adjusted to Cedar Key time.  We have no appointments, no obligations, just time to ponder, relax, spend time with friends, and soak up the Cedar Key vibe.

Monday, December 31st marks the end of our 11th month on the road, and the best is yet to come!

Thanks for stopping by!
Posted by Whatsnewell at 6:10 AM