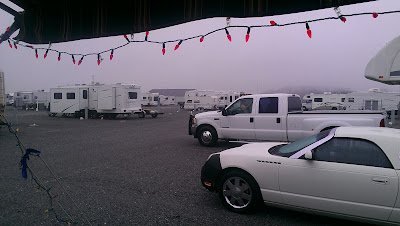 By Sunday morning Heartland RV Park began to resemble a ghost town......okay, I know "ghost town" is a relative term....so, relatively speaking, Heartland RV Park is taking on the look of an RV ghost town.  I can now park our 'Bird right next to our coach.  There are only 5 coaches left in our row. Where over 130 coaches parked for up to 3 months just a few days ago only  a couple dozen remain, and more leave everyday.  Come Wednesday there will be at least 4, or 5 of us leaving, if not more.  Soon there will be just a few diehards left.....those who have chosen to remain after Christmas for a few weeks to help with inventory.  The rest of us will be headed for home, or continuing our nomadic adventures somewhere else where flip flops, mohca frappuccinos, and cold beer are popular at this time of the year.

As I mentioned yesterday we both were awake at 4 am, so we decided to just get up and take a few naps later in the day.  Around 6 am I headed out to the trailer to finish putting everything way so we can squeeze the car in tomorrow afternoon in preparation for our lift off Wednesday morning.  By 9 am I had gone as far as I could, and was approximately 85% done.  There are a few things that must wait on other things being put away before they can be stowed, but that will happen on Monday.

Fortunately the weather was clear, and about 10 degrees warmer.....it got up to 45 degrees, which is much, much more conducive to working without gloves part of the time.  Around 9 am I went back in the coach and took a nap, and then back out into the cold to continue stowing more stuff away.  Around Noon we decided to run into town and do some shopping.  I needed new slippers, and pajama bottoms.  In addition my micro brew beer supplies have been reduced to zero, so we made a beer run out to the county line and picked up 3 six packs.  There is a great store in Cedar Key that maintains a wonderful inventory of craft beer, so I'll worry more about beer when we get to where it is warm enough to drink it.  We arrived here October 3rd with about three 6 packs, and apparently I only drank about 6 beers per month the whole time were were here.

After the beer run we decided we needed a good cup of coffee so made the run over to Greensburg to Longhunters Coffee, but not before we stopped at the Taylor County Courthouse to take a picture of the mural we had seen each time we drove up Broadway.  I would tell TLE each time what a cool painting that was, and this time she said "let's stop and take a picture of it!" , so we did.  According to the sign this is a recreation of the Union Army's General George Thomas' march through Campbellsville on January 1st, 1862.

Greensburg is about 11 miles west of Campbellville, and, as I have mentioned before, has a very nice old town area where Longhunters is located.  We arrived around 12:45 pm, and had a great cup of joe with a bagel.  It was so nice to sit and talk about something besides Amazon.com.

We arrived back "home" around 1:45 pm and I settled into watch some NFL The Broncos won their 9th in a row, the Giants lost badly again, and are on the edge of missing the playoffs, while the Steelers were officially cut from the playoffs in their 3 point loss to the Bengals.  The night cap saw the Seahawks embarrass the 49ers 42-13....and it wasn't even really that close.  There were 3, or 4 more naps for each of us.......I think our bodies and minds realize it is now time to start the recovery process.

As a result of all the naps we managed to stay up to around midnight this time, and went to bed ready to sleep, and actually slept to 9 am.....I think we are creatures of the day once again!  It is very overcast, and a little foggy as I write, and there will be rain right about now, but it should pass by Noon, right about the time I am to drive over to Firestone to get my trailer wheels back with their new shoes.  Then I can re-install them and then put the remaining electric break assemblies on the rear axle.

That was our unexciting day.....well, there is a little excitement knowing we will be heading south in just a few hours now.

Posted by Whatsnewell at 7:14 AM