We started out Wednesday attending a required Defensive Driving class at Riverside County Park Headquarters, right next door to RJRP.  We did take this class when we were last here back in 2011, however, any record of our attendance seems to have been lost, so we were put on the list to attend again.   We were expecting the class to be 1.5 to 2 hours when we arrived for the 9 am start.......yes, I wrote 9 am......no getting up before the sun comes up.  As it turns out the class lasted just 1 hour, and we were free for the day by 10 am!

I previously made a lunch "date" in Pasadena with a friend I first met back in January of 1963 when we moved to Pasadena in the middle of the 7th grade.....Tom Carrozzo.  Tom is my oldest and best friend who has been there in every phase of my life.......middle school, high school, summer camp (twice), college, and best man at my marriage to The Lovely Elaine.....Tom's father, Al, presided at our wedding.  Summer camp in 1966 was the best summer of my pre-adult life....Tom and I worked in the cafeteria that summer "busing" tables at a church summer camp in northern Minnesota....probably less than 60 miles from the Canadian border.  After all the campers had finished a given meal we would put a record on the cafeteria record player and play it over the sound system, singing along  to the Beach Boys, Beatles, Rolling Stones, etc. while we swept the floor, and cleaned off the tables.  We had this routine each day that summer.....after the breakfast shift (6 to 9 am) we would go down to the swimming docks for 3 hours and work on getting the perfect tan.  After the lunch shift (12 noon to 3 pm) we would spend 3 hours water skiing, and after the dinner shift (6 to 9 pm) we would go fishing for Northern Pike.....the sunset in northern Minnesota was about 11:30 pm, so the sun was still up until very late.....that was our routine for 3 months at SEP (Summer Educational Program).  I pretty much lived on 6 hours of sleep a night the entire summer.  That 3 months left me with a treasure trove of stories and memories, many of which my children have heard more than a few times.

Tom bought a Honda S-90 motorcycle at the end of the summer in 1965, and shortly thereafter taught me how to ride a it.  We spent a lot of hours riding that motorcycle all over the San Gabriel Valley.  You may remember back in May of 2012 I wrote about my brother-in-law, Elliott, restoring a Honda S-90 and letting me ride it after we put it back together.......it was like going back in time. 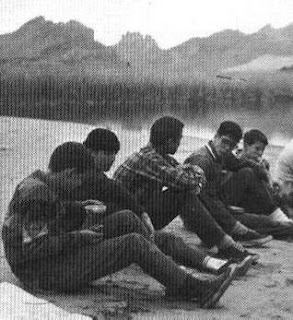 On a Colorado River canoe trip in 10th grade.....going from left to right Tom is #2, and I am on the end of the line

Tom and I have continued our friendship over these 50 years........yeah, it's kind of unreal to say you know been friends with someone for over 50 years.  Another good high school friend, Richard Read, joined us for lunch, and as always it was a great time of reminiscing, and laughter.

Even as I sit here writing this entry the memories of all the adventures Tom and I had over the years are thick in my mind.....I think we could both write a book about those years when we were young and thought we would live forever.

Thanks for stopping by!
Posted by Whatsnewell at 7:44 AM