Ever wonder what our 2013 travels look like on a map?  This is what 8,642 miles looks like.....a lot of friends, scenery and memories come flashing back as I look at this map.  I wonder what next year's map will look like, and begin to feel the excitement, the anticipation mount within me. 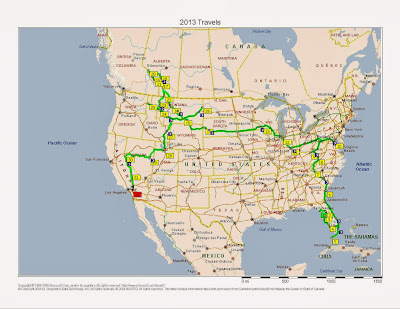 After sitting still here at Rancho Jurupa for the past 6 weeks......back where we started 23 months ago today.....feeling so far away from Campbellsville, Key West, Washington D.C., Indianapolis, Coeur d'Alene,  Jasper, Alberta and most of all today.....Cedar Key.....feeling so far away, and yet feeling so connected to each of them,  and many more places.  Our tires have rolled the roads connecting all of those places....our eyes have seen the sites, our arms have embraced the people who connect us to those places.  It is a good feeling to reflect, but an even more wonderful feeling to know there are still so many new places to be experienced, new roads to leave our imprint on, and new people awaiting us out there.  We are not the same people who left RJRP January 30th, 2012......we are nomads who have logged 21,087 miles traveling the highways and bi-ways of this amazing country in our beloved Newell.....and that does not count one single mile we have traveled in the T-Bird.....you could easily add another 8 to 9,000  miles to that total.  And yet......and yet we have barely scratched the surface.....barely.

Today (December 31st) will be the last daily weigh in for 2013......from this point on I will report my weight every Saturday.   A new numbering system will begin.....a countdown until we say our "until next times".....we now have a tentative date for departure.....February 9th.....the day after my daughter, Sharon, has scheduled her engagement party.

So what, you might wonder, happened on Monday?  For one thing, there was an absence of wind.....just a nice sunny 80 degree day.  The park is full of New Years revelers in waiting.....lots of kids on bikes, skateboards, scooters.....lots of dogs barking at people and other dogs, and me getting irritated with this intrusion into our weekday solitude.

TLE finished her VW dashboard cover project, and it came out nicely, but I neglected to take a picture of it when it was daylight, so you'll have to wait until next year to see what she did.  She also started another project adding a corner to the sunscreen......I know that seems a little obscure, so I will illustrate with a picture when it is to a point where it will make sense.

Around 7:30 TLE headed over to start cleaning Cabin #1, and I followed about 20 minutes later to do the floors.  BUT.....before that I got an e-mail through eBay that a young man who lives in L.A. wanted to buy my Azonic MTB frame that was listed on eBay.  I started the auction at .99 cents, so he had no idea how much I was hoping to get out of it.  He asked, in the e-mail, what my cash price was......instead of responding with a number I asked him what his top dollar offer was.....he came back at $250 (I was hoping for $150), so I immediately accepted his offer, and made arrangements to meet him that evening at our coach around 8 pm....yay!  I have already recovered my purchase price of the entire bike ($240), plus a profit of $10.  Everything else now will be profit.

Back a couple of years when I started parting out bikes I would just list each and every part with a starting price of .99 cents with NO reserve......there is, obviously, a risk that I will not get a good price, but over all it always seems to work out well.  The .99 cent price attracts a lot of lookers, and ultimately increases the number of people bidding in the end.  That is another thing I didn't do on the last bike.

Around 10:30 I took off on a 12 mile bike ride, this time riding around Fairmont lake clockwise, and finishing with a climb up to the top of Mt. Rubidoux......no times to report, but I did cover the 12+ miles in just over 57 minutes.

I spent the rest of the day watching 3 college bowl games, the most interesting one was Old Miss and Georgia Tech ultimately won by Old Miss.

The guy interested in the frame arrived just before 8 pm as I was sitting by the fire.....TLE had gone in earlier as it was getting very cold, very fast.    He quickly examined the frame, gave me $250 cash and was on his way back to L.A. within minutes......suweet!

Since Tuesday was another day of iniquity we hit the sack relatively early........another great day!

Thanks for stopping by!!
Posted by Whatsnewell at 8:11 AM