Wow, what a long day Wednesday was......what a day!  It felt like at least two days rolled into one.  But first, of course, some of you want to know the answer to the daily question.......how much does Clarke weigh today?  Okay, I get it,....some of you may not care a lick about how much I weigh, but I know some of you do care, because deep down inside you want to lose some weight, but you know it's going to be painful, take a long, long time, and you'll have to eat stuff you would never choose to eat, and probably don't like, but now you're hearing about diet food that is actually kind of pleasant to eat, and you can lose weight fast while eating healthy. Can I have a drum roll, please?  I weighed in this  morning (Thursday) at: 201.0!  I am now down 10.5 pounds in the last 18 days......the last 14 days on the Jared Fogle Subway Diet.

Wednesday was the day we hoped to close the deal on the 2003 VW Convertible Beetle.  We arranged to meet up with the seller at 10 am, so we headed over to our bank to pick up a cashier's check around 9 am, and were at the meeting place by 9:55......the seller a few minutes later.  We dickered with him and got the price down  couple hundred dollars, but still wanted to take it out on a 30 minute drive to be sure.....there were some lingering doubts in our collective mind......TLE more than moi.  After running east on US 60 for about 5 miles, we got off at Country Village Road and stopped in a parking lot convinced this was the one.......convinced, that is, until we attempted to "drop the top"......we found there was something wrong with the top lowering mechanism as it wouldn't go down all the way, and then discovered the interior lining in the rear area was completely unattached as all the securing points were broken....here we were more worried about  the drive train mechanicals, and it turns out to be the top that was the deal killer......ugggh.....not knowing how much it would cost to fix, and the fact the owner had not disclosed the problem (you know, "what else hasn't he told us?") we kindly declined to finish the transaction, and went back to our bank to cancel the cashier's check.....once again.....BUT, instead of putting the money back in our account we just took the refund in cash, so the next time we could just hand over the cash to the next seller if we decided to pull the trigger......will we ever pull the trigger?

We did, however, still have one ace up our sleeve....we had test driven a 2001 VW Beetle hardtop on Sunday that we kind of liked....or should I say TLE really liked....it had a sunroof, a turbo, heated seats, a 5 speed manual transmission, and the high end leather seats that were amazingly comfortable!  I texted Keith, the owner, to find out if it was still for sale, and it was........so we made arrangements to meet him after 6 pm in Upland at his home to look at the car one more time.  It has some interior cosmetic issues that can be easily remedied, and it was the one TLE really liked.  I should really pay closer attention to her intuition....I'm getting better at it, but after 42 years I seem to have a ways to go yet.

As soon as we got home I headed out on an 11 mile bike ride including another summit of Mt. Rubidoux......came close to matching my personal best, but topped out at 25 minutes 32 seconds....about 17 seconds off my best....then rode around Fairmont Lake on the way home....took me about 53 minutes total to cover the 11 miles.

In the mean time, I had a number of bike parts to box up and get in the mail to my eBay buyers, so I spent a couple of hours doing that and then taking them into the Post Office to mail.  Then we headed back up to my son's office where I left some of my packing materials 2 years ago, to finish packing the rest of the parts, then delivered them to the local Post Office (just across the street).  Have any of you ever used those automated postal machines that many USPS locations now have?  I love them, and the line is always shorter.....they have 4 of them now at the 91730 Post Office. 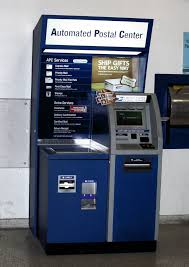 These machines are so easy to use!

From there we headed to Keith's Upland home arriving just before 6 pm.....Keith was not home yet.....he has a long commute over to West L.A.  and back everyday, and he does it on his motorcycle, so his arrival time home varies from day to day....... anyway, we headed down to the local Walmart to look at a new digital scale that provides weights in 2/10's of a pound increments....our current one gives weight in 5/10's of a pound increments....when you're trying to lose weight every 1/10th is important, right?  We ended up with a new scale that will remember your past weights....cool.

While we were there Keith sent me a text advising he had arrived home just a few minutes after we left, so we headed the few blocks back to his home to try and close the transaction.......after a few questions, and a little dickering we finally exchanged money for a pink slip and were on our way home........so it's official.....the search is over.....we are the proud owners of a 2001 VW Beetle 1.8 turbo......she runs fast, and flawlessly.

So we went from the "agony of defeat" to the "thrill of victory" in just one long, long day.....our new girl has heated, high end leather seats, a sun roof, a turbo, and cool wheels, and is about 2 feet shorter than the 'Bird, so we'll have a little more room in the trailer for more stuff.......if we choose.

We arrived back home around 7:30 with big smiles on our faces feeling like a small burden has been removed from our shoulders.....now to get the 'Bird read for sale.

Thanks for stopping by!
Posted by Whatsnewell at 6:34 AM