The first thing on my agenda for Monday morning was to keep my appointment at the local U-Haul establishment to have my oft delayed receiver hitch installed.  Naturally, to get the hitch installed while I waited I had to be there at 7 am to get my car in the shop first, which, in turn, necessitated another early morning.....will the injustice never end?

I arrived shortly after 7 am, but was still the only customer there, so I was processed quickly by the manager......as I handed him my keys he says...."We've never installed one of these on a VW Beetle before at this location, but I'm sure it won't be a problem...".....just what one wants to hear at 7 am.  He estimated it would take about an hour, and it did take just over an hour.....it looks good! 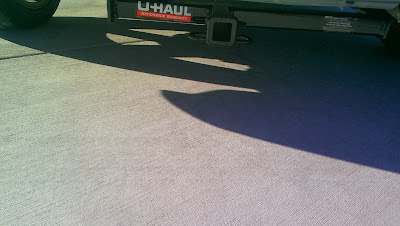 Now I am one step closer to being able to attach my Yakima bike rack.  I ordered the 1-1/4" to 2" adapter (the Yakima requires a 2" receiver), which should be in my possession by Thursday, and in time for mountain biking this Saturday.....yes I am going mountain biking again with my friends.....I guess I didn't embarrass them, or myself to badly last time so I have been invited to join them once again.

Just after I arrived home TLE suggested a long tandem ride was in order......hmmm.....glad to see she is getting interested in bike riding again.  The other day, you will recall, we rode south on the SART (Santa Ana River Trail) to it's present terminus, and she wanted to ride north to see if they had extended the trail yet.  The last time we rode north it ended at Waterman Ave., just north of Interstate 10....about 12 miles distant.  The added inducement for me was there was a Subway just past the end of the trail.....perfect.

The weather guessers had predicted Santana winds starting in the afternoon, so we left around 9:30.....riding north we would be hitting a headwind if there were Santanas.  When we reached the trailhead there was already a small off shore breeze out of the north blowing so we had a slight headwind that kept our speed down in the 12 mph range for the entire 12 mile ride north......normally we can run about 16 mph up the trail.  At least the breeze never stiffened, and we reached the Subway around 10:30...a little early for lunch so we initially thought we would buy my sandwich and I would eat the first 6" when we got home.....however.....there always seems to be a "however".....however, they were training a new girl, and the result was it took almost 30 minutes before my Club was done (there were a few others in front of me being practiced on, too)....by that time it was after 11, and I was starting to get hungry so we decided to eat there.   I don't like to eat lunch that early as it means I start getting hungry for the 2nd 6" part of the Club way too early in the afternoon, but it was what it was.

As it turns out the SART still ends at Waterman Ave., and the ride over to Subway added about 1 more mile to our ride north.  Our ride total came out to just over 26 miles, and my Garmin Edge 205 GPS showed I had burnt an estimated 1622 calories.....TLE came in at just over 1300 calories.  It's a cool little bicycle computer....TLE and I each have our own into which we enter our weight, and the weight of the bicycle.  It then calculates how many calories are burned based on distance, mph, elevation gain and loss.

Our return trip saw us flying down the SART at 20-22 mph most of the 12 miles back to the coach with a modest tailwind.  About 1/2 way back I spied a guy on  a road bike closing the gap.  If you are riding a tandem you do not want to be passed by someone on a single pushing 20+ mph, so TLE and I took the challenge and upped our mph to 22 for the last 7 miles.......not only did we keep him from gaining on us, we put more distance between the two of us.  TLE really stepped it up that last 7 miles, and we did not suffer the embarrassment of being passed by a single!

Getting up early two days in a row takes a toll, and within 30 minutes of our return home I was taking a nap......one of those naps where you really get into a deep sleep....the kind of sleep from which it is difficult awake.  When I did wake up I was already getting hungry and it was only 2:30, so TLE cut up a fresh apple for me to snack on.......that did the trick!

I spent the rest of the afternoon doing some online shopping for a new front tire for my Cannondale Bad Boy, as well as two new tires for the tandem.  For those who have  been reading for a while you will recall I had to replace the rear tire on the tandem when we were doing a day ride in Port Townsend, WA in July of 2012.......while TLE was in a book store I happened to notice the rear tire was about to fail, so I replaced it with what the local bike store had in stock, which was a cheap Chinese 27" tire that had a maximum inflation of 85 pounds....not nearly enough for a tandem, but it did the trick for the last 18 months.  I was able find two tires on Amazon.com for $14 each that are the same brand and model as the ones on my Bad Boy, which lasted 6 years.  I also ordered the aforementioned receiver adapter at the same time after some extensive research, and multiple measurements to be sure the clearances would work.

The Santana winds did not really materialize until about 2 am this morning (Tuesday)....apparently they were reeking havoc elsewhere most of Monday, but they are now here in RJRP until at least Wednesday.

We turned in early again since we have Kiosk opening duties Tuesday.....thanks for stopping by!
Posted by Whatsnewell at 8:12 AM