No doubt some tire of the daily great weather reports.....well, I'm sorry, it is what it is.....although Thursday the skies were a little hazy...probably due to the higher humidity levels.  There were no unexpected calls to wake us up.....just clear skies, and another day in parkland.

A while back I mentioned TLE was in the process of designing and fabricating an addition to our sun shade.  Fortunately, she was able to find the same outdoor sunscreen fabric at the local Lowe's and here is how it turned out.  When it comes to the use of a sewing machine she has no superior.  Now that late afternoon sun can be kept at bay, and we will have a little added privacy. 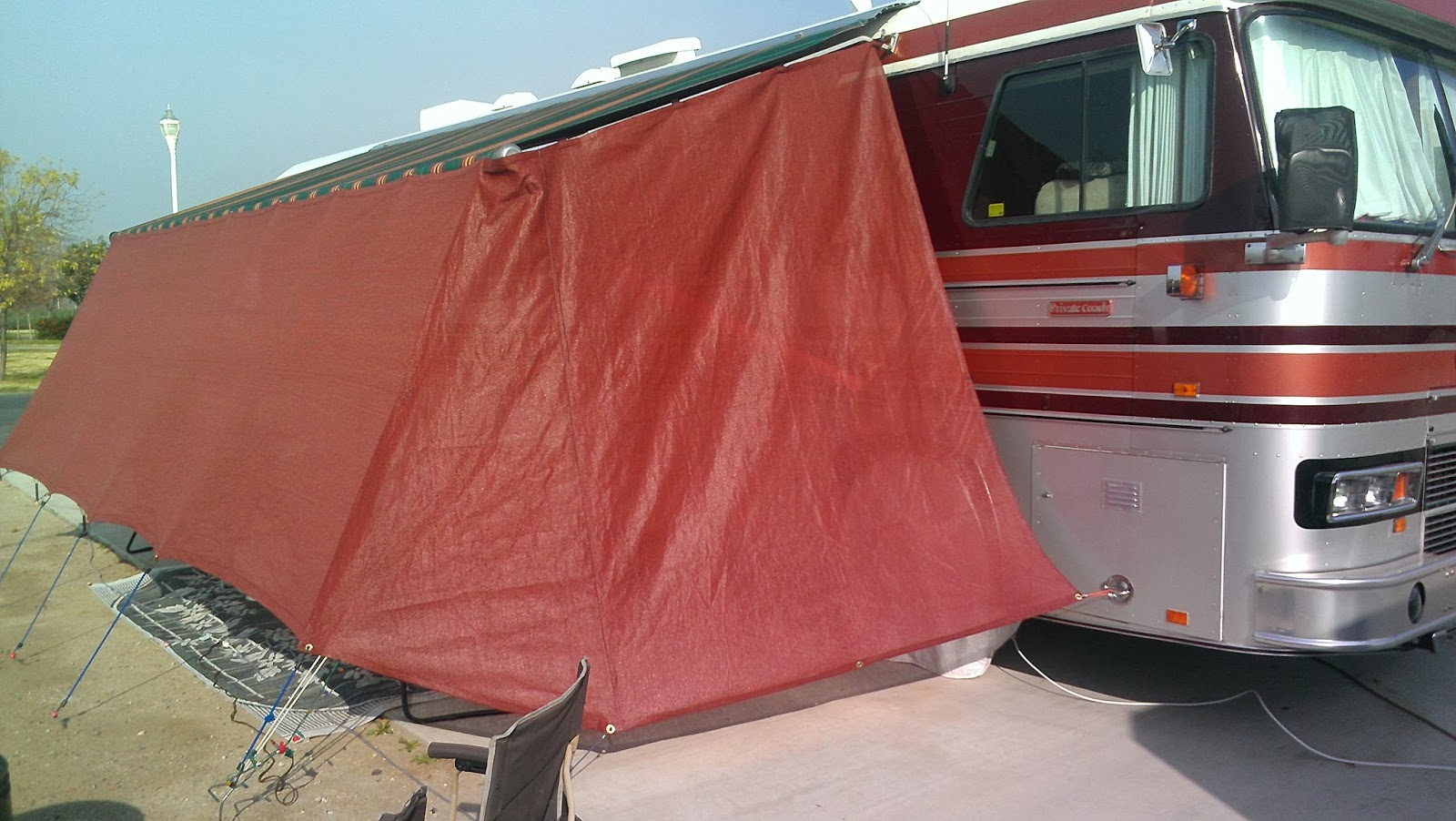 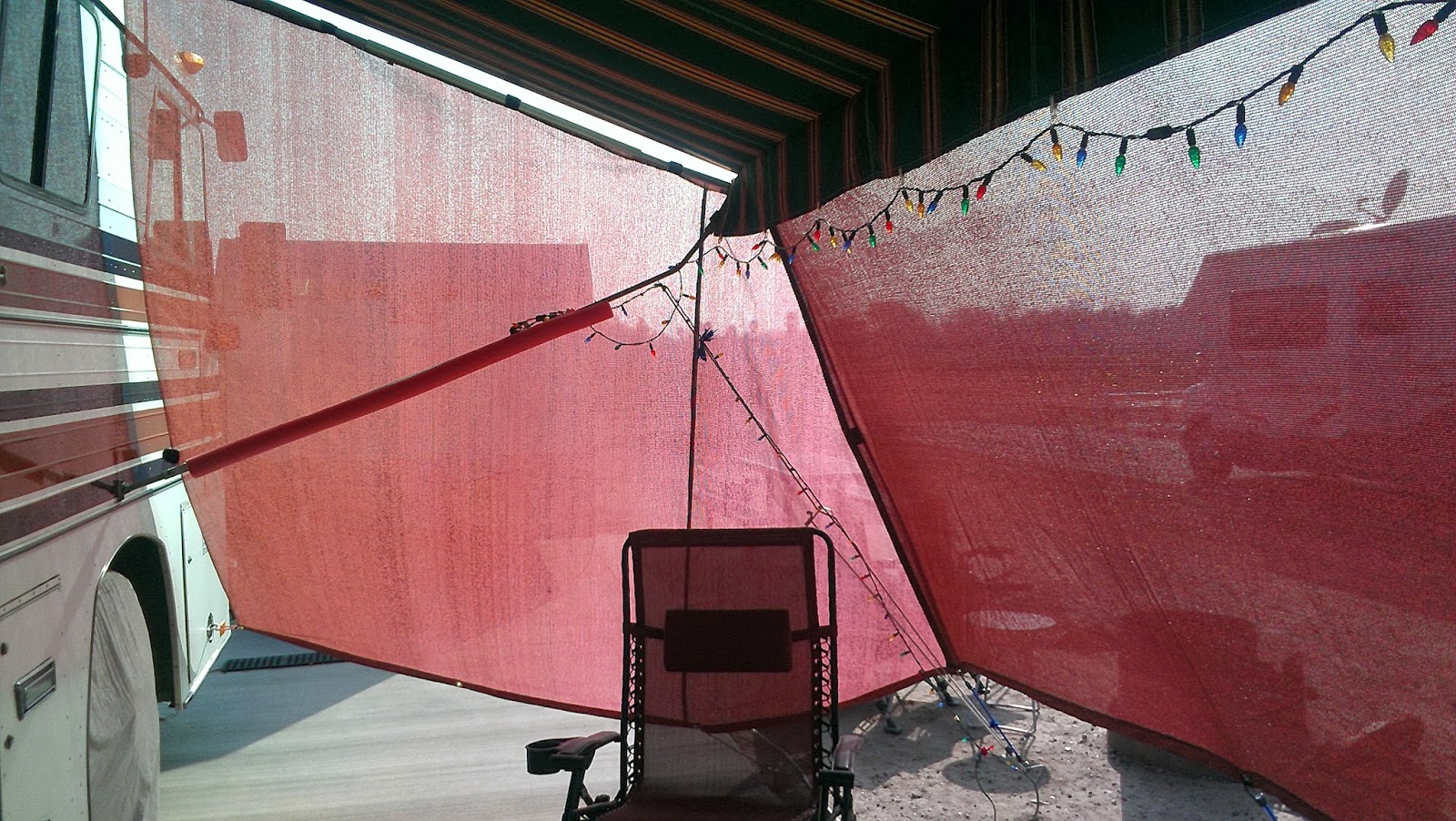 Around mid morning I received a call from my mechanic, Joel LeBron, advising that the "check engine" light on the T-Bird was due, once again, to the catalytic converter going bad....we had this same light back in September, but it went away for about 2 months.  As  I have mentioned previously, we are going to put the car in an auction next week, so we need to get that fixed before it goes in......I'm glad I didn't have the catalytic converter fixed in Sidney, MT where I was told it would cost $1,400 to replace it......Joel will charge $610....I'm feeling just a little richer today.  As a result of that I needed to run the "pink slip" for the car up to Joel along with a few other things that go with the T-Bird, as well as retrieve the CD's from the CD player.

From there I headed to my son's office to pickup some mail and packages that had come in, as well as visit my favorite USPS right across the street from his office.  I mentioned yesterday that post mistress at the Riverside USPS had a problem with two of my boxes.  I had put two Medium Flat Rate Boxes together to ship out the suspension fork I sold, and the same for another shipment.  She told me I could not do that, and would not accept them.  I have done this before on several occasions at the 91730 USPS, and so I headed there after visiting with my son, Chris, and his wife, Rochelle for about half an hour.

Dan, who is the expediter, helps to keep the usually long serpentine line moving along by answering questions, solving problems, as well as providing tutorials on the use of the automated postal machines, which I love to use.  I showed him what I had done, and he remembered me from two years ago doing the same thing....amazing.....and assured me I had done nothing wrong, plus he showed me how to use the automated machine for these over sized boxes.......now I won't have to stand in line anymore!

Once that was done I headed for home........by the time I arrived TLE was putting the finishing touches on the sun screen (see above), and I helped install the 4 grommets along the bottom.  Then it was time to finish cleaning all the individual bike parts from the Trek Fuel 98 bike......by the time I finished it was nearing 3:30 pm, and I hadn't taken my bike ride for the day yet, so I quickly changed, jumped on the bike and was off in a flash.....well, a slow moving flash anyway.

It was actually kind of cool summiting Mt. Rubidoux just as the sun was setting.....the mountain has a whole different feel that time of day, and there were a surprising number of people still hiking to the top even as I flew back down the hill.  I arrived back "home" just as the sun set, and it was cooling off quickly.  Our temperature swings have been about 30-35 degrees from midday to night time.....typical of this time of year.

We watched a few old black and white moves from TCM......"Gunman In The Streets" starring Dane Clark and Simone Signoret, "Grand Hotel" starring Greta Garbo and Joan Crawford, Lionel and John Barrymore, and finally "Dancing Lady" with Clark Gable, Joan Crawford, and Fred Astaire (as himself).....I have never seen any of these before, and enjoyed them a lot.  Joan was quite a good dancer.

On a side note it is remarkable that another year has passed since I wrote about the 35th anniversary of my father's passing......January 10th marks the 36th anniversary of that day, BUT it also marks the 29th birthday of my beautiful daughter Sharon Suzanne.......Happy Birthday to my "Bunny".

Another day lived well.......thanks for stopping by!
Posted by Whatsnewell at 8:52 AM