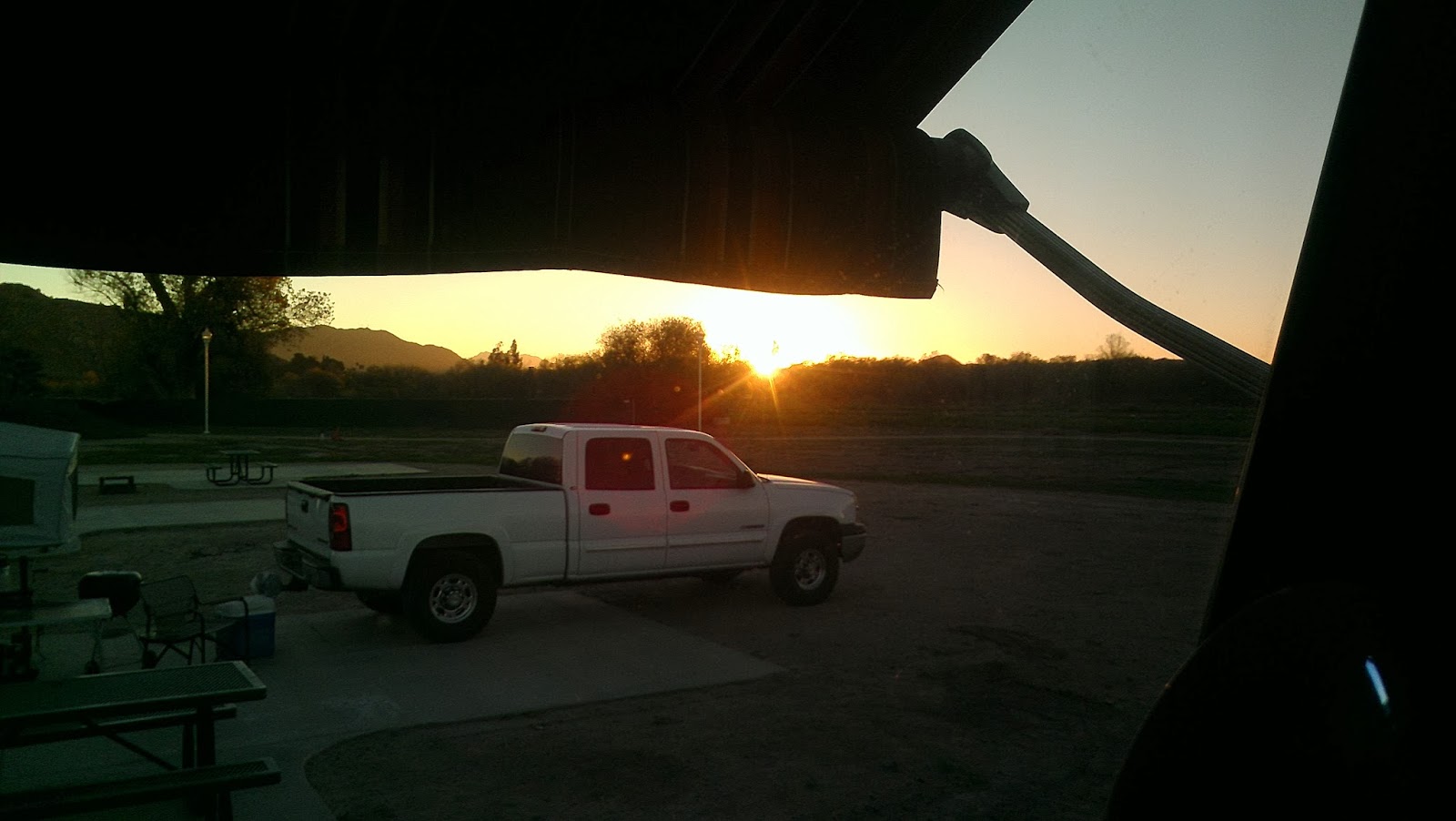 Good morning!  At least it is here in Riverside, CA......no snow on the ground.....not a cloud in the sky......and it will top out at 80 today.  I will ride my bike as I do most days wearing a short sleeve jersey, riding shorts and sandals.  For most of the day all of the windows in the coach will be open letting the balmy breezes flow through.  There will be no snow shoveling, no power outages, no falling icicles to dodge, no special snow tires to install.  The topic of conversation will never turn to how far below zero it might get today, or tonight.  When I wake up in the mornig to see pictures my friends around the country are posting of snow in their area (well, except for those friends in Cedar Key right now) I am grateful I am where I am, and it is not just the weather that makes it so....

Posted on Facebook by my sister, Jill, who lives near Ann Arbor, Michigan

Sunday TLE and I had Kiosk duty, as usual, beginning at 6:30 am......of course it is early January and the early morning temperatures are around 49 degrees, so I wear a long sleeve t-shirt, and a vest for the walk over to the Kiosk.  Both lakes were stocked with trout Friday afternoon, and there is a line of cars out at the gate awaiting the 7 am opening of the park.  We stay pretty busy for the first 90 minutes then it settles down to a manageable pace for the remainder of our shift.  TLE left me in charge around 8:45 knowing Carolyn would be on at 9......it's only fair since she did most of the shift last Tuesday, and most of the shift Saturday.....no complaints here.  I was released, however, by Carolyn about 30 minutes early a little after 10 am.

We had arranged a lunch date with our daughter Kate and her two kids (Elijah and Charlise) at Tio's Tacos on Mission Inn Blvd. in Riverside.  We had a couple of errands to do after lunch so we rode the tandem over to Tio's Tacos via Fairmont Park arriving just at 11:30.....there were no Subway footlong's consumed on Sunday.

We sat outside to eat

Tio's Tacos is not just a Mexican restaurant......it is a cool, funky, eclectic dining experience.  They have indoor seating, but on a nice day like Sunday virtually everyone is enjoying their food choices al fresco and taking in the unusual art created by the owner using botttles, tin cans, old toys.....whatever seems to strike his fancy at the time. 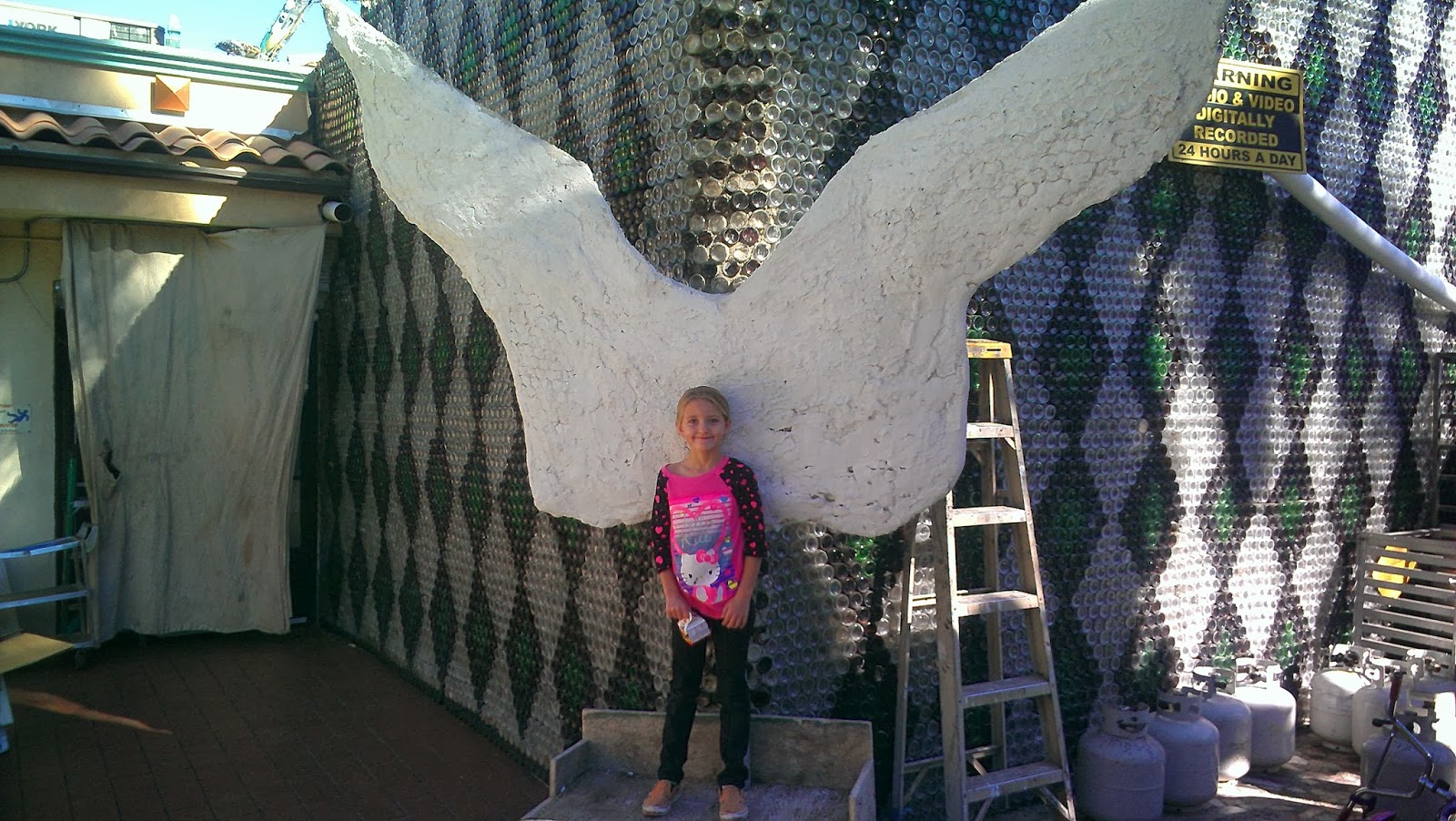 One of the main reasons we are so glad to be where we are is the opportunity to spend time with our kids and grand kids......the fact that we get to do that in wonderful weather is a side benefit in the end.

After a wonderful lunch of tacos, burritos, chips and salsa TLE and I gave Kate another big hug, and hugged on Elijah and Charlise several times, and then headed off down Market Street to Staples where I needed to buy some more packing tape for those many boxes I must mail out this week, and then over to Ralph's for some groceries.   In all we rode just over 14 miles on the tandem getting back just in time to see the end of the first NFL game of the day between the San Diego Chargers and Cincinnati Bengals ultimately won by the Chargers.  The afternoon game between the Green Bay Packers (in Greenbay, WI where it hovered near zero the entire game) and the San Francisco 49ers.  This was a great game ending with a last second field goal by San Francisco to win the game by 3 points.  So, two west coast teams proved they could go and win a couple of games where it was freezing Sunday.....I don't think either west coast team was favored going into the games.

After returning from our ride I spent the rest of the afternoon watching football, watching several eBay auctions I had going come to and end, and napping.   Six eBay items I had for sale closed in the afternoon......it is looking more and more like I will come close to tripling my investment in the Azonic bike.  Two more items close Monday, and then I will tally the results.  In all I listed some 22 items from the bike, and sold 21 of them.  Fortunately there were a few buyers who won more than one of my auctions so I will not have 21 individual boxes to pack.

TLE made a nice salad for dinner.....we watched a few pre-recorded Frasers, and we were in bed by 10:30.

In closing, a good friend, Elliott Walsh, whom we met with his wife Ann last year in Cedar Key, FL was there (Cedar Key) for New Year's again this year to meet up with many of our friends, whom we are missing terribly this year.  He wrote the following in his blog about the nomadic life, and it moved me.....here is the essence found in the last paragraph, "Nomads are like that. I just love being around them. As a lesson for the New Year, and all the years ahead, it’s one to bear in mind: Be open to others, share what you have, and love beyond the limits of your own  'tribe'. If you drop your fences, and wander 'outside', you will be astonished at what you receive, and the freedom that you find." (Swift Passage Blog Portal).   If you have time take a minute to click on the link to the left and read the entire entry. We had the honor last year of spending a week with Elliott and Ann at their property in Georgia getting to know them better.  They are both very thoughtful, articulate, wonderful people, and we look forward to spending time with them again in the future.

Thanks for stopping by!
Posted by Whatsnewell at 8:15 AM