We started off Thursday thinking we had to clean our two cabins, however, we found out pretty early on that the tenants were not checking out until 1....we thought they had checked out Wednesay.  So, instead of cleaning cabins I got ready to do my 12 mile circuit which would make it 5 out of 6 days I have ridden now.  I think riding every single day is the only way I am going to keep my metabolism up high enough to continue losing weight.  The ride went smoothly, and I was back at the coach in just under 57 minutes.....the view from the top of Mt. Rubidoux was spectacular, and I should have stopped to snap a picture.....maybe Friday.

I realized this morning I had never posted a picture of the re-worked dashboard cover that TLE modified to fit properly.  It came with the car, but I don't think it was for the right year. TLE is an exceptional seamstress, and made it look like it came from the store that way. 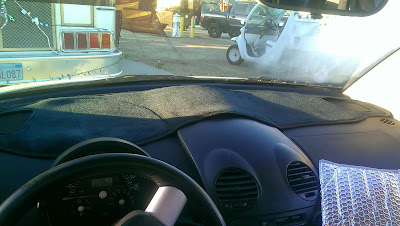 We are really falling in love with our Beetle, and are more and more convinced we made the correct purchase for our lifestyle.  I have an appointment at U-Haul to have the 1 1/4" receiver hitch installed next week so we can mount our Yakima bike rack.

Once we were both back from our exercise (TLE walks about 4 miles every day now) we showered and headed into Rancho Cucamonga  to do some shopping at Costco (needed coffee, and a few other items), plus we wanted to look at eyeglass frames.  We both want to change it up a little and get a "new look".  Here are the frames I liked. As we walked into Costco TLE turns to me and says......"I like going shopping with you!"....wow, I thought I would never hear those words.....:D  Seriously, though I used to hate to go shopping, but since we have retired, and have been living together 24/7 in the coach I have grown to enjoy it.....I actually know where to find things in the grocery store now! 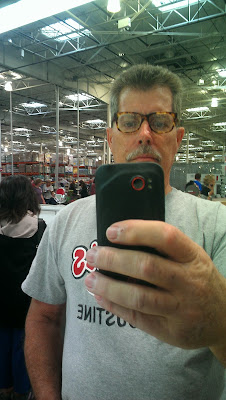 TLE found two, or three frames she liked, but I will defer on showing her choices as she is still "looking".

We also stopped by my son's office to pick up a package that had come in, then the post office to mail off an eBay item I had sold, and also Pro Bass where TLE looked at some sandals....she didn't pull the trigger....she's waiting for the ones she likes to come on sale.

Since we were so close to the Rancho Cucamonga Goodwill we stopped off to see what they had.  I found three "cool wick" sports shirts for $5 each, and TLE scored a black skirt.

One of the "other things" we bought at Costco was a package of 4 petite filet mignons, a bottle of Pino Noir, and fresh spinach for dinner.....it was time for a formal dinner.  TLE did the calorie research and believed she could bring dinner in at around 300 calories, which is what my ususal 6" club has in it.  We'll see how the weigh in comes out.

Around 4:30 I turned on the BBQ to grill the steaks whilst TLE cooked up the spinach, and we ate around 5 just as the sun was setting.  That filet is one of the best I have ever grilled.....I cherished every single bite.

We watched the Alabama vs. Oklahoma Sugar Bowl game, and it was a great game.  We have friends who live in both states, and if it was possible to have the game end in a tie I would have been happy, but secretly I was rooting for the underdog, Oklahoma, to win.....I am usually for the underdog unless it is my "home" team in the game, then I'm for them regardless.....it's the same for you, right?  Oklahoma won a game that was closer than the score indicated.....if not for a couple of crucial turnovers late in the game by Alabama the game might have gone into overtime, but in the end Alabama committed too many turnovers, and allowed their quarterback to be sacked too often.

Another day lived well!  Thanks for stopping by!
Posted by Whatsnewell at 8:16 AM