When I left off writing yesterday it had stopped raining, and by the time we pulled out of Kate's driveway around 7:30 am the streets were drying up from the overnight rain.  In fact as we merged on to I-215 north to I-15 and ultimately US HWY 395 we had nothing but dry weather with long crystal clear views.  It was about 52 degrees and we could not have asked for a better driving day.

Our first big obstacle was Cajon Pass which carries us over the San Bernardino Mountains to the exit for US HWY 395 whose coattails we will ride all the way to Lake Tahoe.  Cajon is a 6% grade for about 22 miles, but the climb actually begins at the intersection of California 60 and I-215 making it just over 33 miles of climbing.  The Newell's Detroit Diesel 6V92 (350 horsepower with turbo) handled the task with power and grace, and we found ourselves exiting I-15 to US HWY 395 about 50 minutes later.

We took our first stop after 80 some miles at Kramer Junction where I had a bowl of cereal and stretched my legs........ 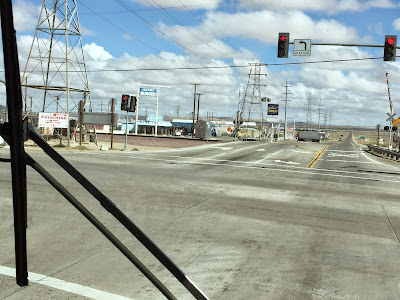 ......I have been passing through Kramer Junction (my father always called this junction 'Four Corners') on my way to adventure in the Eastern Sierra since the early 50's, and every time I pass through this intersection that same feeling of expectation, of adventure is there......just past the intersection and to the left you can see the iconic blue 'Astro Burger' sign where I have consumed burgers too numerous to count over the years. 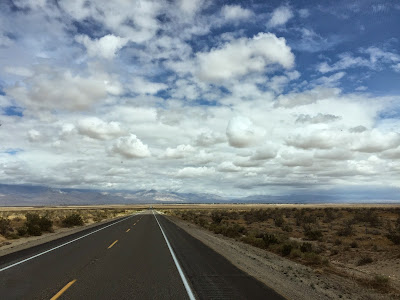 We took our second break at the Coso Station Rest Area (just south of Olancha, CA).....as we approached Lone Pine, CA from the south you could see snowy evidence of the storm the night before on the foothills of the Sierra Nevada Mountains. 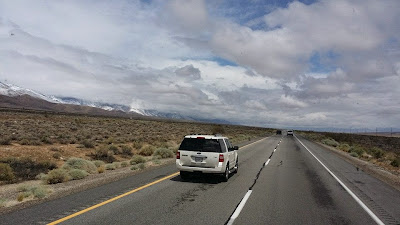 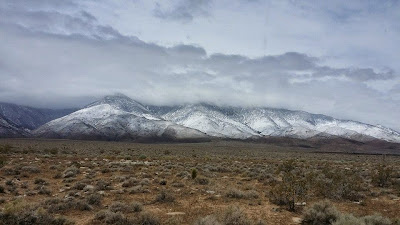 From Lone Pine it was just 58 miles to Bishop, CA, our destination for the day. Just about 10 miles from Bishop the rain began to fall in earnest, and continued to fall as we entered the city limits of Bishop.  A few weeks ago our friends Paul and Nina ('WheelingIt'...click the link to read Nina's review) stayed at the Tri County Fairgrounds here and had good things to say about it, so we thought we would give it a shot, too. I had contacted the fairground office via their website requesting a site for one night, and had been assigned #23.....these are all back in sites, and with our 62' length I was going to be difficult for me to shoehorn the coach into that site, so we asked if we could move to #20, which was approved immediately.  I don't normally make reservations, but the annual 'Mule Days' celebration begins on Sunday (runs for two weeks) and I was concerned that they might be filling up by Friday.....as it turns out they were mostly empty, but come Sunday they will begin to fill up.  I have to say that the WiFi provided by the fairgrounds is the best RV Park WiFi I have ever used.....bar none.  No doubt when the RV park fills up here it will slow down, but with about a dozen rigs here is is blazing fast.....we actually streamed Netflix!

Around 3 pm the rain stopped so we decided to take a walk around town, and ended up walking about 2.5 miles stopping in at the world famous Schat's Bakkery (yes it really does have two k's in it), home of the famous 'Sheep Herder Bread', to buy some bagels and bread.

After another quick stop at Von's we walked back to the coach.......as I was unlocking the door I became aware of an unusual odor, but couldn't immediately put my finger on the source.  I thought maybe it was coming from somewhere in the fairgrounds.  About 30 minutes later I noticed that the charger was throwing about 40 amps into the batteries, which is not normal, so I checked the battery status and noticed they were discharging.....suddenly it became clear....one of my 8D batteries was sulfating......in other words it was dying, and in the process was draining my other three batteries.  I quickly found the bad battery.....the chassis (starter) battery on the passenger side.  I got out a wrench and disconnected the positive cable from the battery so it would stop 'gassing' and begin to cool down.

Ironically this battery was over 7 years old, and was the first battery I had replaced on the coach just after we purchased it in March of 2008.....that it lasted 7 years is amazing....I know what I'll be doing first thing Saturday morning before we depart for Lake Tahoe......locating a replacement battery.

We watched most of the two NBA playoff games that were on Friday evening.....first up was the Cleveland Cavaliers at the Chicago Bulls......the game was won by Chicago on a miraculous 3 point shot by Derek Rose as time expired.  A great game!  The second featured the Houston Rockets at the L.A. Clippers.  It was a close game until the middle of the third quarter when the Clippers went on a 23-0 run and basically put the game away....at one point the fourth quarter the lead was up to 33 points.

We watched another episode of the 'Amazing Race' before calling it a night.......tomorrow South Lake Tahoe......God willing, and the roads to the north are cleared of the 10 inches of snow that fell on Friday.  Right now (Saturday morning) based on the CalTrans cameras along 395 the road is clear.

Thanks for stopping by!
Posted by Whatsnewell at 7:30 AM