Sunday saw us continuing to set up our 'home' for the next three and a half months......when we sit in one place for a long time ALL the stuff basically comes out.......all the bells and whistles that contribute to the quality of our nomadic life.

When we left TVC* September 2nd we had a lot of firewood left that we didn't want to give away, so we wrapped it in a tarp, put it under the picnic table and then covered the picnic table with another tarp.  It was very cool to return some 8 months later to find everything intact, and our wood nice and dry.  We also left two pieces of plywood under that tarp on the picnic table that I used to protect my solar panels last summer from falling pine cones....you can see them leaning against the fence in the picture below.  While TLE went shopping I spent time raking up the pine needles and other winter debris so we could put down our awning mat. 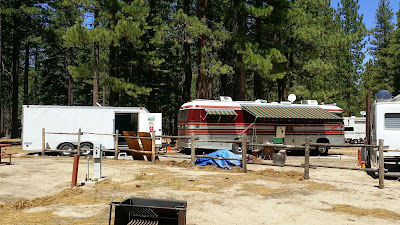 One of the things I love about our site is we get the morning sun, but are protected from the afternoon sun by a stand of Ponderosa pines.....the morning sun quickly takes the night chill off the coach. 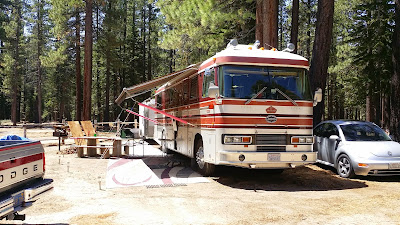 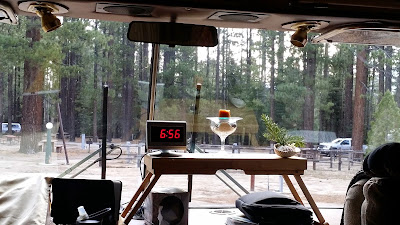 Our site is in section 'E' where many of the summer workers live......right now it is pretty empty as they don't start selling sites to the public in this section until the Memorial Day weekend, and until the summer rush begins it will pretty empty over here.

There were two NBA playoff games on tap for Sunday afternoon, and the first game between Cleveland and Chicago was a great game coming down to last second when Lebron James sank a shot from 'downtown' to win the game at the buzzer.  The second game between the Rockets and Clippers was great for a personal reason......it was not close.....the Clippers won by 33 and totally dismantled their opponent in the process giving the Clippers a 3-1 edge in this best 4 out of 7 series.

*TVC = Tahoe Valley Campground
Posted by Whatsnewell at 7:38 AM