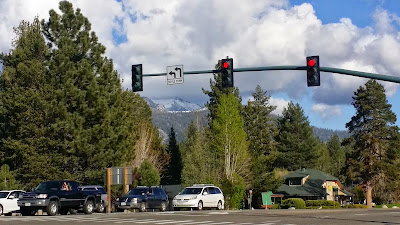 Even though the precipitation has finally left the Tahoe Basin you don't have to look too far to see that winter is still peeking over the nearest mountain ridge.......Tuesday (you notice I'm not referring to Tuesday as '2nd Saturday'....hardly seems like a Saturday when you are arriving for work at 8 am) was another glorious sunny, warm day....the second in a row without any precipitation to interfere with the sun showers.

For the second day in succession I eschewed the snow boots, gloves, watch cap, Under Armor and long pants.....we seem to be finally into the 'Tahoe wear' season......shorts, t-shirts and sandals (no flip flops when working, however, I don't think Harry has gotten the memo).  Many folks wait until the day after the long weekend ends to depart for home so Tuesday saw the  second wave of folks leaving the campground to return to their sticks and bricks lives albeit under slightly less stressful driving conditions.

By 9:30 I was done with my first round of site checks and decided to tackle some of the more demanding repair orders I have created over the past 10 days of site inspections......the leaking faucets....and there 'are' many (you can now substitute 'were' in place of 'are).  I have some plumbing experience in my background (at one point in my late teens I was a plumber's assistant) so replacing a bad washer, or removing and replacing a broken/bad faucet is not above my pay grade, but knowing how to turn off the water at each site requires a little local knowledge so I asked Harry to help me..... 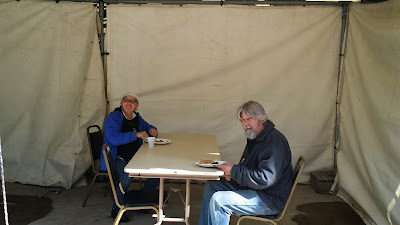 Harry is on the right in this picture

.....in section 'A' you must turn off the water for the entire section to do any plumbing work....in sections 'E', 'F' and 'G' all you need is a pipe wrench to turn off the water at each site, except for a few dozen exceptions where you need a special 'key' to turn off the water at a given site.  In all there were between 35 and 40 leaky faucets to repair and, fortunately, most of them just needed fresh washers, but there were about 10 faucets that were just plain broken and needed to be removed and replaced with new ones.  Between Harry and I we plowed through all but a half dozen of the leaky faucets in about 3 hours.  We'll turn the water off in section 'A' Wednesday morning to take care of the two offenders there, and then tackle the remaining ones in 'F' and 'G' when we find the special 'key'.

So, after a couple of weeks of inspections followed by a few days of making repairs we are on the verge of having a campground where everything......well almost everything....works as it should.  With the combined efforts of everyone the park is losing its rough edges and is beginning to show 'pride of  ownership' again.

By 2:30 TLE decided to call it an early day as she was one of 3 people in the office and there was just not enough work.  By 3:30 I had run out of work so I headed home for the day, too.

Thanks for stopping by!
Posted by Whatsnewell at 7:13 AM