We began Thursday by removing the VW from the trailer, then dropping the trailer and moving it back about 3 feet with the 'Trailer Valet', and finally putting out our awning mat, awning, and sun shade...... 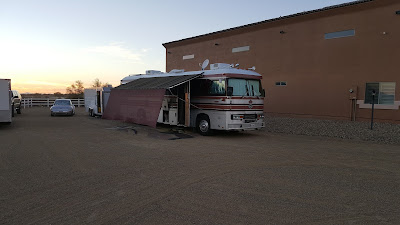 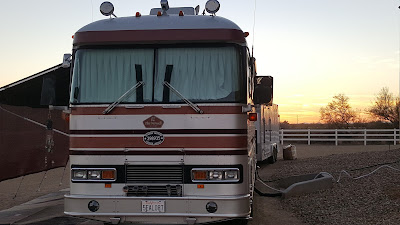 ......I moved the trailer back 3 feet in anticipation of power washing our rear facing radiator, which has not been cleaned in about 8 months......unless it (the trailer) is moved back I cannot open the radiator 'door' far enough to get at the radiator properly with the pressure washer.

I then spent time installing the handlebar mounts for our new Garmin cyclo computers.  TLE and I have used the Garmin Edge 205 for 10 years, and they have been great, but they are old, and their batteries don't hold a charge as long as they used to, so I decided to upgrade to the Garmin 500 for each of us..... 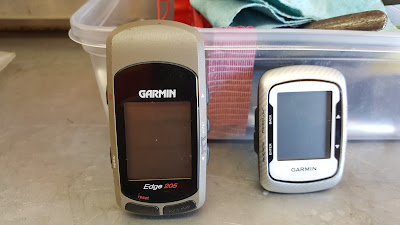 ......these new Garmin are much more powerful, compact, and have much longer battery life.......the great thing about GPS based cyclo computers is there is no wiring, and no need to program in your tire size, and,  therefore,  it can be moved from bike to bike with ease. meaning we only have to have two of them!

While I was working on the Garmin install Tom (our host) put up a picture of his Gilligan Island pinball machine with a special message he had just programmed into it...... 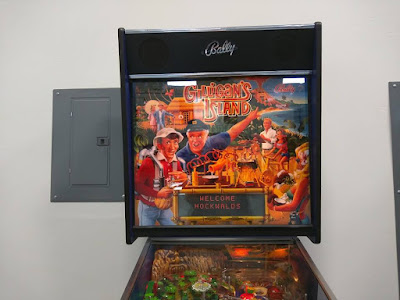 Around 1:15 we drove into Wickenburg to watch a rehearsal by the Bill T. Jones/Arnie Zane Dance Company in the Wickenburg Ranch subdivision......this is not something I would have been interested in 5 years ago, but I am glad I went......I was intrigued by the creative process.  Tom's daughter, Laura, works for the Del Webb Performing Arts Center in Wickenburg, so that was our 'in' to see the rehearsal.  We were home before 4 pm.

I watched the Thursday Night Football game (TNF) between the Raiders and Chiefs......it was played in Kansas City in freezing, windy conditions.  Ultimately the game was decided by a kickoff run back for a touchdown by the Chiefs.  The Raiders never got untracked, and lost 21-13.

Thanks for stopping by!
Posted by Whatsnewell at 9:54 AM