We arose Saturday not knowing if we would be rolling our wheels later that morning, or not.  It was very, very windy all night long courtesy those rascally Santa Ana winds.  Since the wind was from the north, and the first 70 miles of the 215 miles we wanted to cover would potentially be with a cross wind as we headed eastward on I-10....but I get ahead of myself.

We planned to meet our oldest daughter Meredith at Red Hill Cafe in Fontana around 8:30 am for the final leg of our 'until next time' tour.  We had never been to this breakfast place before, but had heard good things, and Yelp gives them 4 stars on 171 reviews.  There was really nothing left to do as far as our departure was concerned.....the only variable was would it be too windy when we wanted roll?

We arrived at Red Hill Cafe just as Meredith did......she is so punctual!  We were seated quickly, and had coffee and had our orders delivered in just minutes!  One thing I was not expecting was the enormous portions......and the picture below does not show the plates of biscuits and gravy which were delivered just seconds later......there will be 'doggy boxes'...... 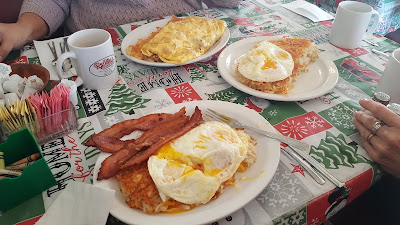 ......the food and service were superb, but all too soon it was time for our 'until next times' and the end of the 'until next time' tour.  We had a wonderful time talking with Meredith, and I will truly miss our conversations as we meander eastward.

I set the cruise control at 60 mph and enjoyed the windless drive eastward.....traffic was light, which is one of the things I love about leaving SoCal on a Saturday morning.  By 12:40 pm we had covered 104 miles as we pulled into the ARCO fuel station in Salton City, CA to top off our propane tank......propane will never be cheaper......and dump our black tank in anticipation of about one week of dry camping at Quechan Casino in Winterhaven, CA (just across the border form Arizona, and about 2 miles from Los Algondones, Mexico).

When we merged on to I-8 near Calexico we had 46 miles left before we exited at Los Algodones Road and the Quechan Casino.  We hit three construction zones in that 46 miles, and a cross wind as we neared the Imperial Sand Dune area.  The last construction zone was the coup de grace.....due to that construction we could not exit I-8 at Los Algodones, and had to drive an additional 3 miles east to Winterhaven Road to cross the Interstate and head 3 miles back west to the casino......ugh!

We did arrive unscathed just after 3:30 pm Pacific Standard Time, however, we are now in the Mountain Time Zone according to our cellphones, which means it was really 4:30 pm, and the sun was setting fast.  We found a good spot to park with the nose of the Newell facing due west, which will allow us to tilt our solar panels and grab power from the sun all day long......... 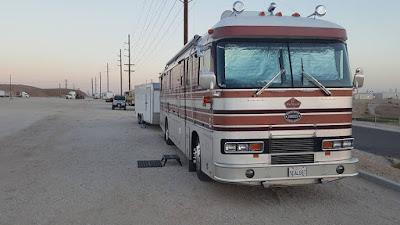 Sun is setting in the west 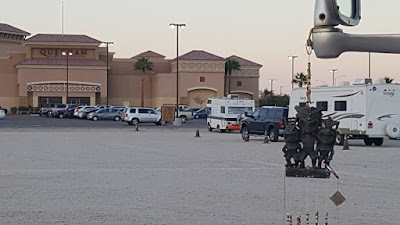 Our proximity to the Casino

.....when we stayed here last year the cost was $10 for three days, so we walked over to the casino to find out what it would cost for a week.  We were pleasantly surprised to find out they are not charging anything right now......SCORE!!

We walked back to the Newell where I turned on the TV to watch the two remaining NCAA football games of the day.......Penn State vs. Wisconsin for the Big 10 championship, and Clemson Tigers vs. Virginia Teck Okies.....both were great games and both saw great comebacks.......Penn State came back from 28-7 at the beginning of the 3rd quarter to win 38-31 as time expired, but the Okies fell a touchdown and extra point 5shy in their comeback falling to the Tigers 42-35.  Both were great games.....can't ask for anything more than that, right?

We were in bed a little after 10 pm (really 9 pm PST) looking forward to the week before us....thanks for stopping by!
Posted by Whatsnewell at 8:16 AM