Our Jello plan for Thursday was to depart Wittmann around 11 am so we could arrive in SoCal (Rancho Cucamonga) before sundown......I don't like driving in the dark.....but this is what greeted us at 227th Avenue around 9 am......this dirt road is about .75 miles from the pavement at this point.....there was no way we were going to drive that in the low slung VW.  So we opted to wait for 2-3 hours until the road was passable then make a run for the pavement....... 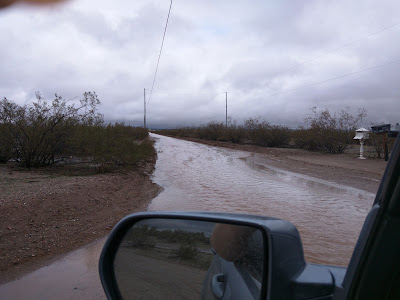 ......it stopped raining around 11 am, and at 1 pm I walked out to the road to access our chances of 'escape' and found the road passable, so around 1:30 pm, 2.5 hours after our planned departure we were on our way knowing we would not arrive at our destination until well after dark......initially our drive west on I-10 was heavily overcast, but no rain until we got past Palm Springs where it began to rain again in earnest........... 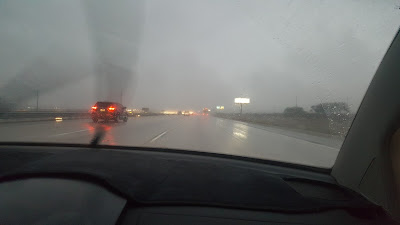 ......and by the time we reached the top of Banning Pass it was nearing torrential proportions.....at this point TLE was driving and she had driven the last 117 miles, so we pulled off the Interstate changed seats and continued our trek westward.  I have to admit that since my eye surgery driving at night in the  rain is not nearly as daunting as it once was.....my night vision has improved immensely!  As we merged on to SR-210 the rain stopped, and the last 20 miles into Rancho Cucamonga was without rain.  We arrived at my son's (Chris) home just at 6 pm......naturally we gained an hour crossing back into the Pacific Standard Time Zone at the California border.  In all our drive took 5.5 hours including a 30 minute stop at Tom Wells Road, just before the California border, for fuel, and a Subway sandwich.  More rain is forecast for Friday.....of course.....what would a funeral/memorial service be without rain, right?

So, we have arrived safely in SoCal for Mark's memorial service, and for a family Christmas celebration......looking forward to time with our kids, grandkids and great grandkid.....it is, nonetheless, a time of mixed emotions for all of us.

Chris and Rochelle had a dinner of Lasagna and bread sticks ready for our arrival, and Chris and I spent time watching the N.Y. Giants vs. the Philadelphia Eagles TNF game.....the Giants (Ely Manning) committed three turnovers  via interception resulting in 10 points and the difference in the game....the Giants lost 24-19 in a disappointing game.  Their defense played good enough to win, but were betrayed by their offense.