It has been a tough week for my NFL teams......first Oakland lost, then Sunday the Broncos lost a close game 13-10 to Tennessee, and the Seahawks lost in a blowout to the Packers.  Then came the Sunday night game between the league leading Dallas Cowboys and my New York Giants.....I have to admit I didn't think the Giants had a chance, but that is why they play the games, right?  The weather in New York was freezing, and the same Giant defense that defeated the Cowboys in the first game of the year showed up again and the Giants came out victorious 10-7, so at least NFL Sunday ended on a high note.

During the day I continued to deploy stuff.......I brought out the anti gravity lounge chairs, and tables for the patio area, I put the jack stands under the four corners of the trailer to stabilize it since it is not attached to the coach right now, and then spent time cleaning the dust off the rear of the coach, and the front of the trailer. 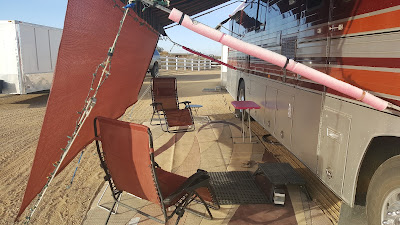 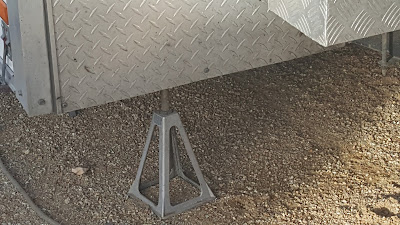 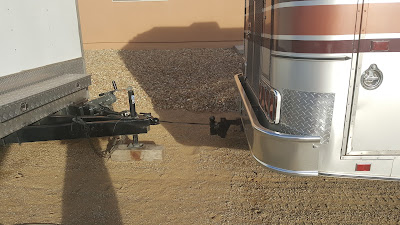 ......separation from the mother ship

Sometime in the afternoon I got the step ladder out so I could spray off the patio awning and all the window awnings.....they still had grime on them from the 6 months we were in South Lake Tahoe, as well as some pine tree sap........I think they turned out pretty good...... 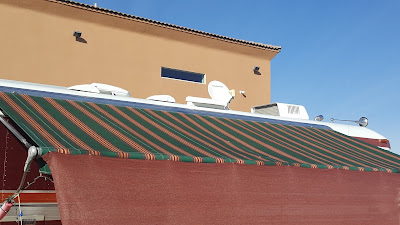 This is the best the patio awning has looked in a year.....not bad for almost 35 years of age, huh? 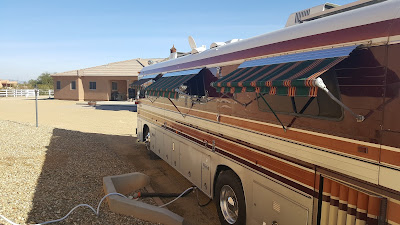 .......I even got out and set up the back/ab machine without having to remove the tandem, or TLE's Cannondale!

We had dinner with Tom and Darlene courtesy Darlene......chicken fried steak, mashed potatoes, salad and corn.  After dinner I headed back to the coach to watch the aforementioned Cowboy vs. Giants game whilst TLE and Darlene drove into Wickenburg to see a dance performance.  TLE was home just before the end of the game.....we watched the last 45 minutes of 'Lake House' (2006) starring Sandra Bullock and Keanu Reeves.  If you have not seen 'Lake House' give it a watch.....very interesting premise and story.