We slept in Sunday until about 7:30 am.....my routine is a little bit different when we are dry camping, and especially the first morning.  When we have hookups the coffee is already made when I get up, I turn on the electric heaters to take the chill of the interior, turn on my computer, then I fill the coffee carafe, my cup and TLE's cup with hot water to preheat them before pouring coffee into them.....it stays hotter longer, right?  By the time that is done my computer is up and I sit down with a cup of coffee and begin typing.  So what is different when we are dry camping?

Well, for starters to brew coffee when dry camping we use our Corningware stove top percolator which means there is no coffee until I turn on the stove first thing, and it takes about 20 minutes start to finish before coffee is ready for consumption.  Next I check to see what the percentage of charge is for our two 8D house batteries.....they were at 87% Sunday morning.  I then turn on all 3 gas heaters to take the chill off the interior of the Newell.  Then I go up on the roof (first morning only) to tilt our solar panels towards the southern sky to garner as many rays of sunshine as possible in order to recharge our thirsty 8D battery bank.  By the time I'm finished 'tilting' the coffee has usually finished perking and it is time to imbibe that wonderful chocolate brown elixir.  I don't preheat anything as the coffee coming out of the stove top percolator is significantly hotter than the electric one.  The last thing I do is turn on my computer to type my daily blog post as I type the entire blog post using the battery power of the computer, and depending on how long that takes I may use up the 90 minutes of power it provides before having to turn on the inverter to finish the blog.  Most of the time I finish well before the battery runs out of power.  Then in the evening when we are watching TV I plug in the computer and it recharges for the next morning. 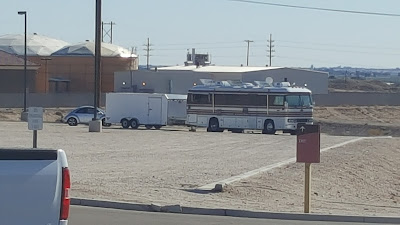 Since we are now on Mountain Time and our DirecTV is on Pacific Standard Time all of our programming comes on one hour later.......instead of football beginning at 10 am, it now begins at 11 am, and so forth.  As is the case most Sunday's most of the NFL games are played in the first time slot (used to be 10 am, now 11 am), with maybe four played in the 2 pm time slot, and then the evening game is at 6:30 pm instead of 5:30 pm.  I spent my time watching the Denver Broncos vs. the hapless Jacksonville Jaguars, then in the afternoon the N.Y. Giants vs. Pittsburgh Steelers and the Oakland Raiders vs. the Buffalo Bills. The Broncos pulled out another close one with the help of their #1 defense, the Giants lost badly, and the Raiders came from behind and won their game easily.

During the half time of the early games TLE and I took a walk around the perimeter of the Quechan Casino parking lot.....we found one complete lap equaled one mile so we did three laps to get our three miles of walking.  Let's face it.....walking in circles gets a little boring, but sometimes that's what exercise is, and you do it because you know you need to do it.

The afternoon games were not that interesting, and we ended up leaving in the middle of the fourth quarter to drive into Yuma.....the sun was just setting behind the local hills....... 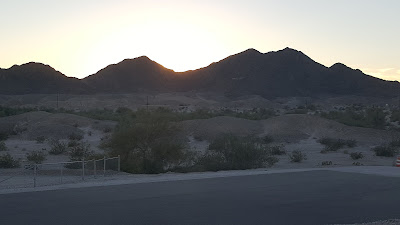 ......one of our favorite micro breweries is Prison Hill Brewing Company in Yuma and  I have written about them several times before.  We pay them a visit every time we are here to visit the dentist and are never disappointed. 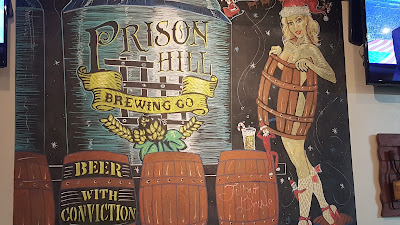 We ordered deep fried avocados for our appetizer, and two pints of their Chocolate Pumpkin Brown for starters, and then added entrees of Blackened Salmon (moi) and the Chipoltle BBQ sandwich (TLE)........ 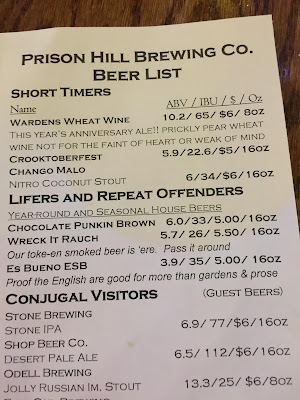 I enjoy the titles of the various brew categories!

.....the food and service were great.....I did have to send back the salmon as it was a little under done.......I think the chef took it off the stove about 1 minute early......it was back at my table in minutes and I loved every bite!  The server gave me my second pint (Chango Malo Nitro Coconut Stout) without charge due to the Salmon issue, which TLE and I split.....very, very good!  I am not a fan of the coconut, so this was a surprise.

We were home by 7 pm and began watching the Seattle Seahawks vs. Carolina Panthers.  It started out as a defensive dual, but became a blowout by the second half with the Seahawks prevailing 40-7 as time expired.

In closing, since I watched TV pretty much all day long and until 9 pm Sunday night the batteries only recharged to 95% from the 86% they were at in the morning.  That's okay, because Monday I will be watching no TV until early evening (MNF), so I'm pretty sure the batteries will get back to 100% by the time the sun dips behind the local hills once again.  As I finish writing this blog post the sun is putting electrons back into our 8D batteries, and we are well on our way to 100%.

Thanks for stopping by!
Posted by Whatsnewell at 8:29 AM