TLE had her annual optometrist appointment Thursday, plus a hair appointment so she was gone from about 12:30 until after 5 pm.  It was left to me to finish putting everything away, which was fine with me.  I just took my time knowing that by 4 pm everything I could put away would be put away.......easy peezy!

And that is precisely how my day went.....easy peezy......no surprises, no issues......just puttin' stuff away.  It's really kind of cool how everything always fits, and I'm not left with anything that does not have a place.  I no longer get that 'overwhelmed' feeling when it is time to organize the trailer for travel......even though it looks ominous, and even impossible at times I know at the end of the day that the VW will fit inside once again.

I received a text message from TLE about 4:30 advising she was stopping off at 'Noodle World, Jr.' to pick up some Chinese takeout for our dinner at Kate and Nick's home, and would be home soon.......and that our arrival time at Kate and Nick's had been moved up from 6:30 to 5:45 pm......uh oh!  I needed a shower, so I stopped what I was doing and took the shower.....TLE arrived just after I got out, and we were on the road by 5:10 pm.

We arrived just before 5:45 to find Nick feeding Jolene Rose with long time family friend Manny pouring wine......Kate was about 15 minutes away from getting home from work.  We had a nice evening of 'one on one' conversations, and the time just flew by....... 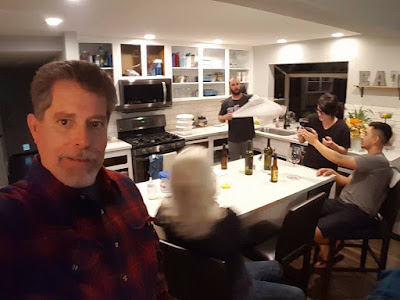 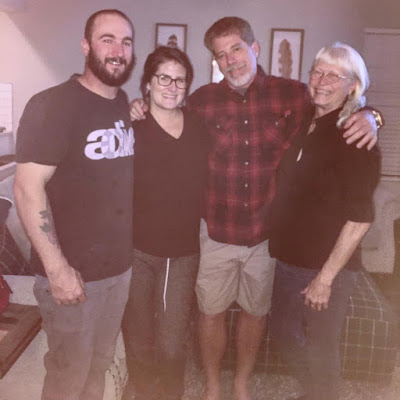 Until next time Kate and Nick!

We were home in time to see the controversial end to the Cowboys vs. Vikings NFL game.  We watched the latest recorded episode of 'Designated Survivor', then a 1997 movie called 'The Jackal' staring Bruce Willis.....was actually a very interesting movie.....given 6.3 stars out of 10 by IMDB......I would be at 7 personally.  For me the jury is still out on 'Designated Survivor'.....we'll see.  We're kind of in this 'got to bed late' mode right now.......hit the sack about 11:45 pm.

Oh, by the way, TLE's optometrist appointment revealed her eyes are healthy, and her prescription has not changed......no sign of cataracts!  Very, very good news for her.