"And that's all I have to say about that!"

Sunday was the first of two days off for TLE and I, and we had planned to drive down to Carson City to restock our pantry and fridge, but we decided, instead, to spend the day deep cleaning.....for moi that meant pulling everything out of our American Trailer, then sweeping out the dust and dirt from every corner, then vacuuming out what what was left.  I believe this is the first time in 5 years I have completely emptied the trailer for this purpose.  Now, in my defense, I have vacuumed on a regular basis, but I always left the stuff in the back and the corners there as it would mean an all day thing, or at least a 1/2 day thing.  At any rate I finally finished, and then put most everything back by 1 pm.  Since Tim and Laila (son and his fiance) are coming up for three days this Memorial Day weekend, and will be using the trailer as a bedroom, I moved some stuff out to our Rubbermaid Deck Box, and into some of the Newell storage bays to give them plenty of room......yes, of course, all the bicycles will be moved outside during their stay. 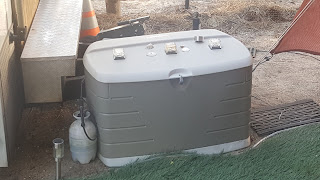 At 1 pm I began vacuuming out the VW for the first time in a few weeks, then drove it down to the storage yard to wash the exterior.....on my way over I stopped off at Miguel's (TVC manager) site to ask if TLE and I could sit down with him to discuss some employee issues which have arisen.  At the beginning of the summer Miguel set up a 'chain of command' and empowered several of us with the title of 'supervisor'.  A couple of employees have been making end runs around the 'chain of command', and have, in the process, been undermining what little authority we possess.  At any rate, after I finished giving the VW a bath I picked up TLE and we headed over to Miguel's site where we had a very productive 30 minute discussion, and left with the assurance that the problem was being corrected.  There are a few other changes coming that I will write about later after they have been announced.

Miguel had scheduled our first employee party for 2 pm in the Group Area......he spent the morning and afternoon slow cooking some ribs, and then finished with some BBQ'd chicken.  We arrived just before 3 pm to find everything in full swing, and quickly integrated ourselves into the festivities.  Eventually the single malt Scotch came out.....I had brought with me a bottle of 'The Glenlivet' to share, and so did our activity director, Michael.....when our bottles were finished Art (part of the 'Ranger Crew) brought out a bottle of Cragganmore...... 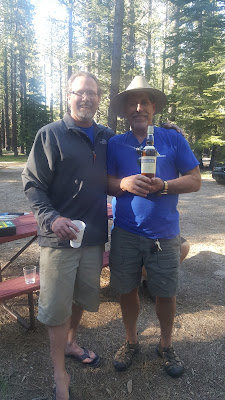 My buddy Art and I

.......the party was a resounding success, and around 6 pm we began to disperse back to our homes.  We had a great time getting to know each other better, and some new bonds were formed......it was a good day, and that's all I have to say about that!

When you need to buy something from Amazon, think of us.......we will appreciate every purchase you make using our Amazon Affiliate link, and  remember, using our link will not add one penny to your purchase, plus we will receive a small commission.
Posted by Whatsnewell at 8:17 AM