Wednesday is the last day before the incoming Pacific storms slam into SoCal so we decided to put away most of the stuff still out.....the lounge chairs, the awning mat, the BBQ, fireplace, etc..........while TLE was doing the "heavy lifting" I had her move the portable air compressor back to the trailer so I could finish checking air pressure and adding air where needed on the trailer tires.  As it turned out only two of the four needed just a few pounds.  We finished doing all we could do outside around 11, and by that time I was ready for a rest......I wonder how much longer I can milk this post surgical recovery thing......just kidding Elaine....seriously....

I belong to a Newell online forum found at www.newellgurus.com which is one of two Newell user groups.  One of the members recently found a 1979 Newell for sale on eBay located in Colton, CA which is just a few miles north of us as the crow flies.  I volunteered to go look at it for him, so around 1:30 TLE and I hopped in the car to do just that.

Like many used vehicles and trailers I have found on eBay and Craigslist which look better in pictures than in person, this 1979 Newell also looked better in the pictures, but for the price it would be a good project for someone with the kind of "do it yourself" skills needed put her back in excellent condition.  It's not a project I would want to take on at my age, but someone with a little vision, and "elbow grease" still could end up with a beautiful coach.  On the other hand, the owner warrants that all the systems work (A/C, fridge, generator, etc.).  I did note that the tire date codes are from 2001, so all six tires would have to be replaced immediately, if not sooner.

From there we headed back south to the Salted Pig for a late lunch/early dinner.....just TLE and moi.  I had, you guessed it, the Street Tacos, and a very good Stout beer.  By the time I took this picture of my tacos, one had already vanished.....I can still taste them. TLE had a "Roasted Beet Salad", which she thoroughly enjoyed.....I guess she has gotten over the "sugar beet experience". 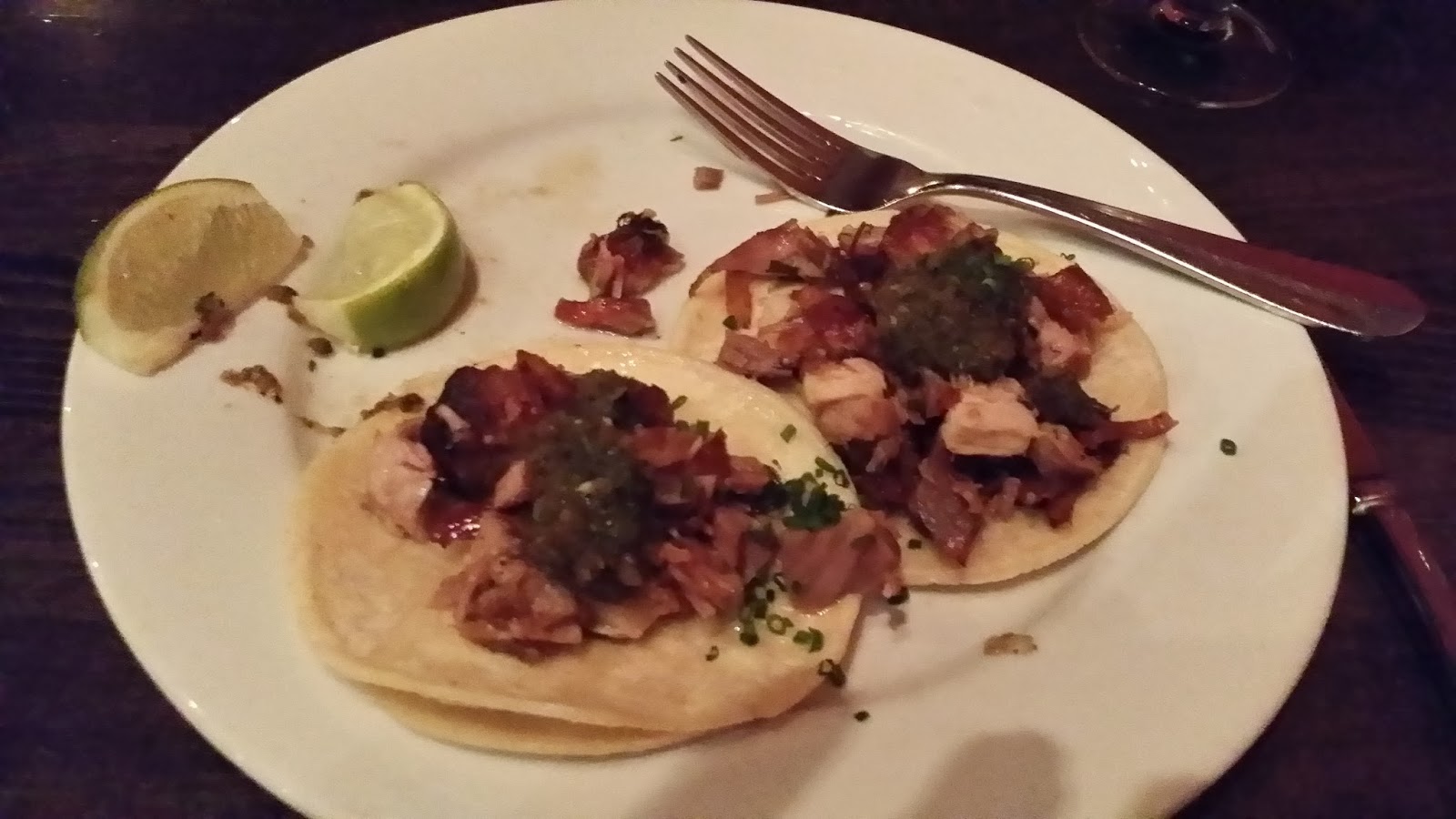 We sat and talked about life past, present and future, and reminisced about our 3+ month stay here in RJRP for close to two hours.  By the time we emerged from the Salted Pig it was after 4, and time to complete one more errand before returning to our coach.....get the propane bottle we use for the BBQ refilled.  The last time we had to refill that bottle was just before we left RJRP the last time in late January 2012.....it lasted over two years!

The first gas station we stopped at that had propane told me.....and this is no joke...."we're not selling propane today due to the weather...".....whaaaat?  In all my years I have never heard that one before.  We finally found a place on Mission which had no issue with the weather (slightly cloudy and warmish by the way) and got the bottle refilled for a flat $20, before heading "home".

We spent the evening watching some shows, including NCIS, and NCIS L.A., which were recorded Tuesday night, and then Revolution and the two hour Survivor season premier, which recorded while we were catching up on the two NCIS'.

Thanks for stopping by!
Posted by Whatsnewell at 9:19 AM