Since January 1st we have spent 2.5 months changing our view on a regular basis, and the rest of the time we have spent at 4 fixed locations......Riverside, CA, South Lake Tahoe, Cape Blanco and Sparks, NV.  In the last 7 months we have only covered 1600 miles......that is going to change right now!

We continued south of US HWY 395 through Gardnerville, Minden, Topaz Lake where we re-entered California once again.  The drive south along the eastern edge of the Sierra Nevadas provided frosty views all the way, and we could often see it snowing just to the west of the highway, but never got snow, or rain on us. 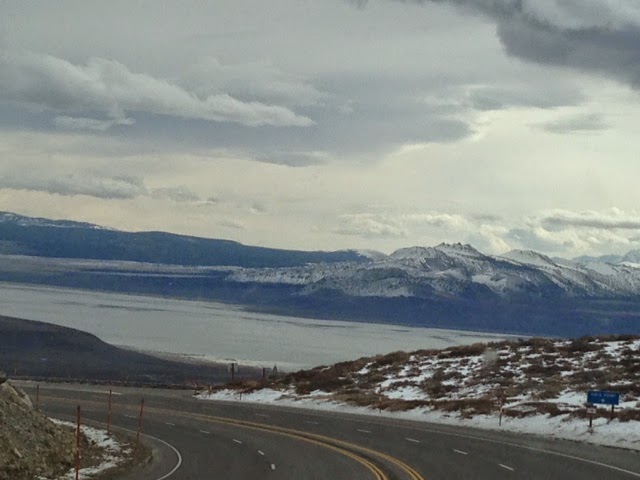 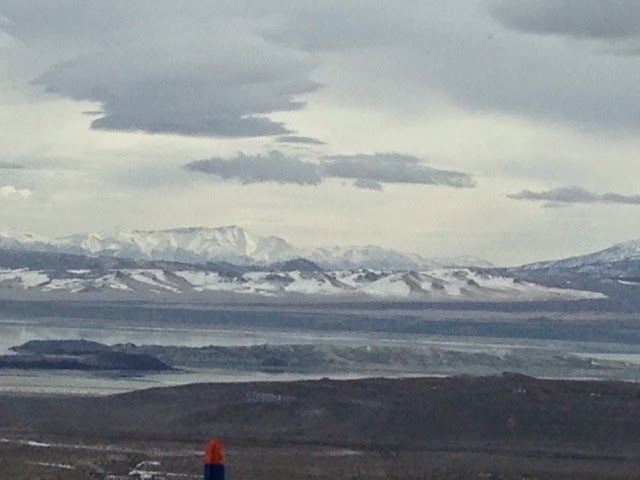 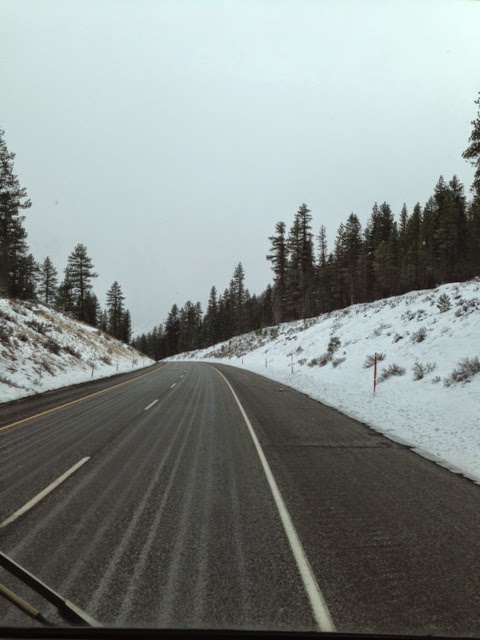 US HWY 395 from Reno, NV south to Riverside is probably our favorite 500 mile drive and we have done it north and south dozens, and dozens of times over our 43 years of marriage.  We never get tired of the views, winter, or summer.  The thought that we would not drive this route home to SoCal was unthinkable, even though we had initially decided to take I-80 west to I-5 and then south due to the uncertain weather conditions along our preferred route, but a change in our release date, and the good weather window along '395' was too tempting to resist, so we did not.  We were not disappointed.  While it was quite cold necessitating the continuous use of our chassis heater up front to keep our feet warm, the drive south was spectacular, and most importantly......uneventful.  There was snow everywhere except on the highway.   The mighty DD 6V92 performed flawlessly as we climbed and descended 6 passes on our way south.

We crested Conway Summit at an elevation of 8,128' (the highest elevation point on the entire length of US HWY 395) around 1 pm and stopped at the vista point, as we most always do, to take a picture.  We did not, however, go outside to take the picture......it was about 32 degrees! 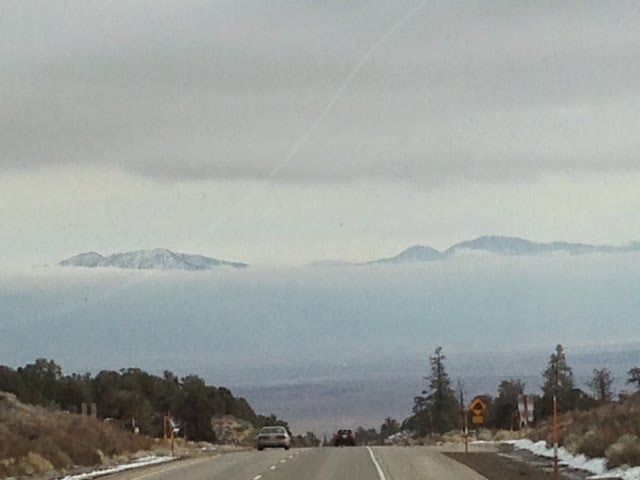 The last big obstacle of the day was descending Sherwin Grade which is an 8 mile section of '395' with a 6% grade.  I put the coach in 2nd gear, and 'jaked' down the hill at 33 mph.  We were at one of our favorite '395' RV parks (Boulder Creek RV Park)  just south of Lone Pine by 3:15.....well before sunset, which was our goal.  We have stayed here a dozen times over the years, and for a quick overnight stop it is perfect.....they have all pull through sites, and they are just long enough for our 62'.  While there are a bunch of great 'boondocking' spots nearby, with overnight lows down to 30 degrees we opted for 50 amp electric.

We quickly set up, rolled the Beetle out of the trailer, and drove back into Lone Pine to have dinner at 4:30 at one of my favorite Eastern Sierra restaurants......The Merry Go-Round.  It is a fine dining restaurant, and not inexpensive, but I have never been disappointed in the food, or the service.  The various rating services give them 4-4.5 stars.  Yelp comes in at 4 stars on 97 reviews.  We would give them a solid 4.5. 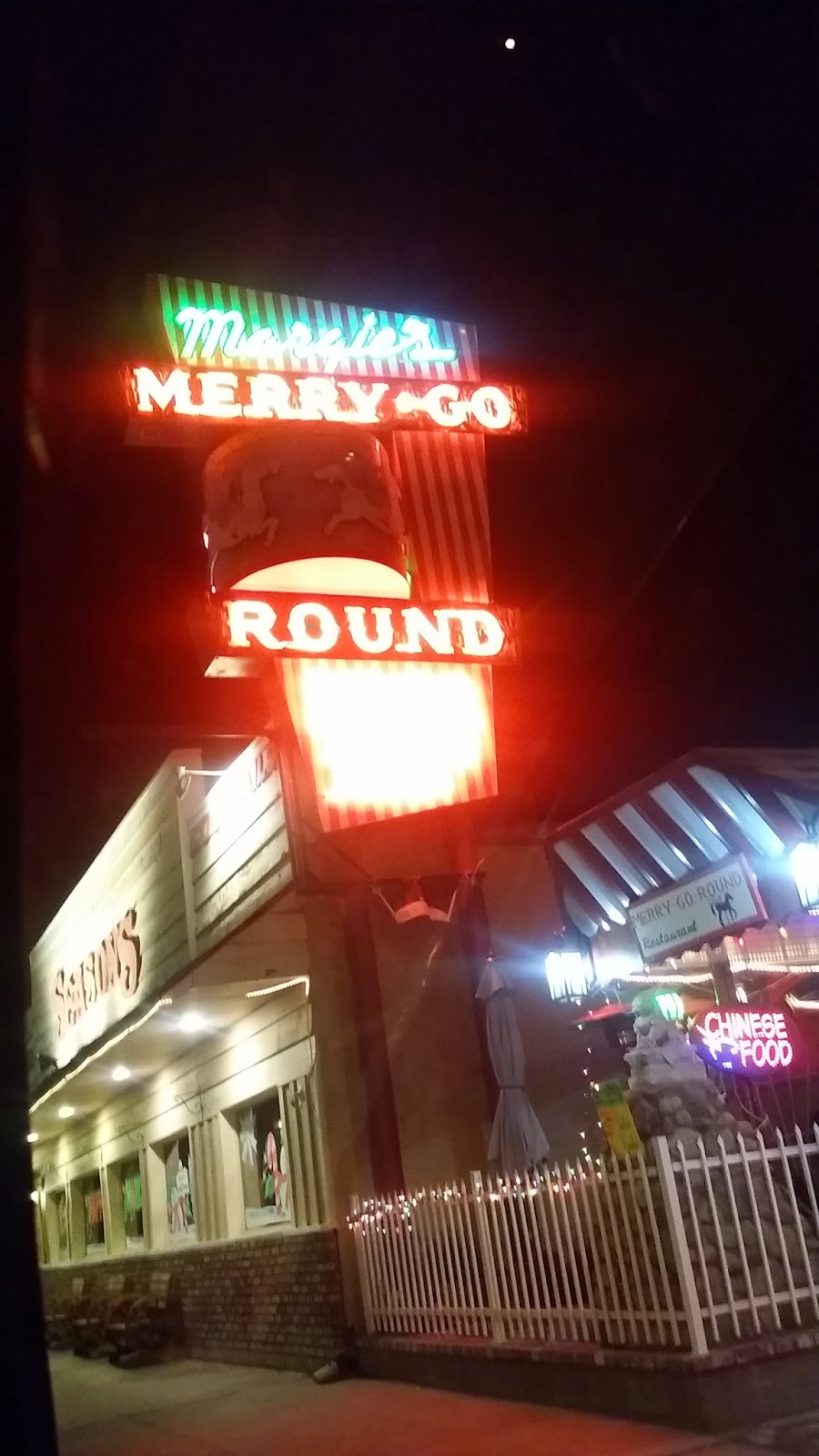 Well, what can I say but that it was another day lived well.....we are back to doing what we do best.....changing our view on a regular basis!  We'll be arriving in Ventura sometime Saturday afternoon for 3 days and nights on the Pacific Ocean.....the day time temps are in the 70's right now with over night lows in the 50's....quite a change from the last 3 months!

We watched the finale of "The Amazing Race" and were in bed by 11.....thanks for stopping by!
Posted by Whatsnewell at 7:29 AM