I went outside about 8 am Wednesday and was pleasantly surprised to feel that sort of balmy, warmish air that we get after we've had a round of 'Santa Ana Winds'.....oh yeah, I apparently forgot to mention in my blog about Tuesday that was had 'Santa Ana Winds' all day long.....nothing ferocious, but enough to seemingly blow the rest of the leaves off the desiduous tree our coach has been sitting under for the past 3 weeks, which might mean I won't have to sweep many leaves off our awning mat from this point to the end of our stay here.

So, I had a few more projects to wrap up before the wedding festivities begin Thursday.....first up was finishing the HDMI cable installation for the outdoor TV. 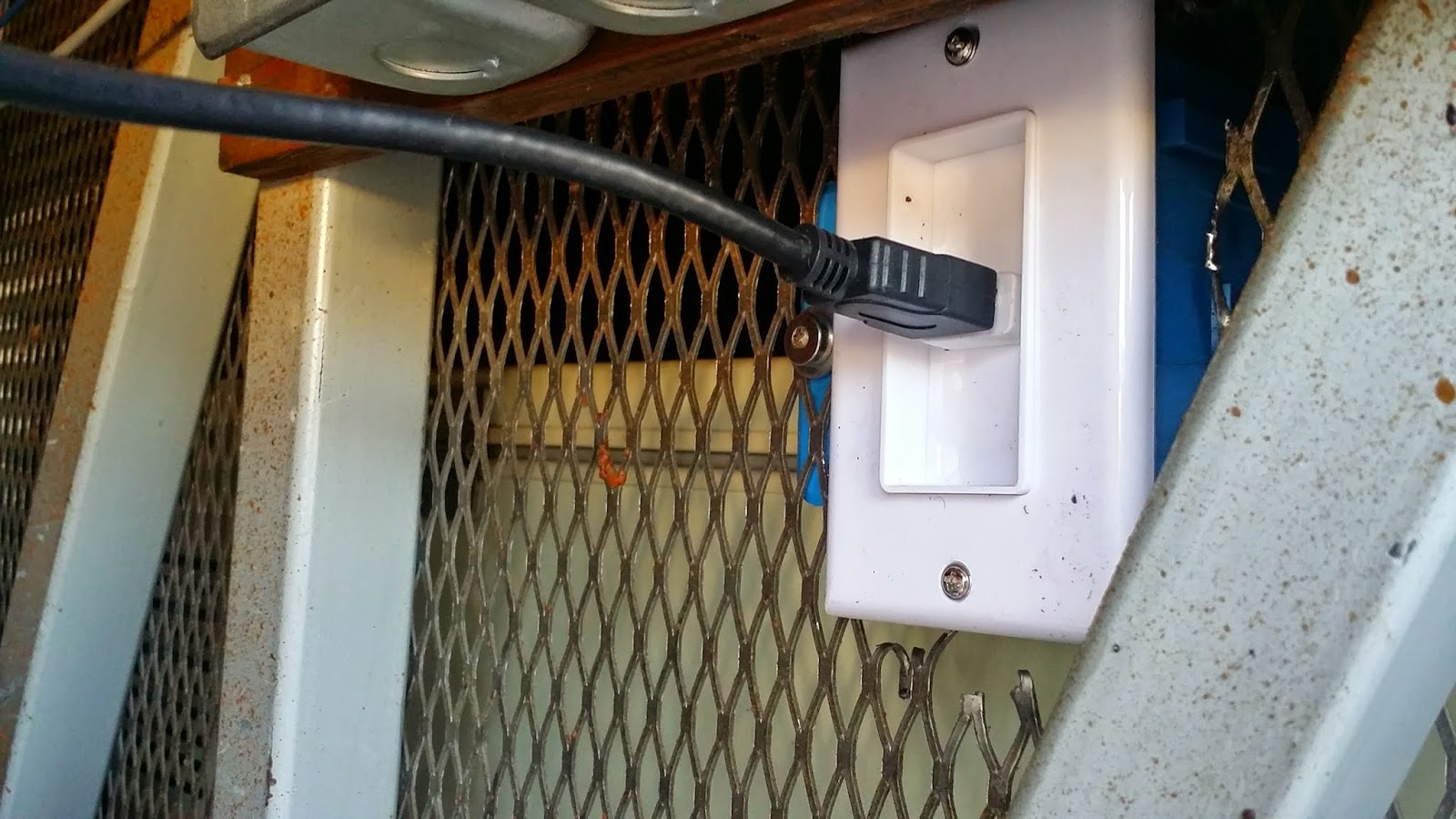 Since I ran the cable down into the basement refrigerator bin I needed to cut a hole in the wire mesh so I could install the HDMI receptacle (above).  Cutting the hole was a lot of work and took me about an hour, but then the rest went quite quickly.  Next up was mounting the ActionTec MyWirelessTV transmitter on the door of the basement storage bin.....this is the only way I can get a signal to the receiver in the trailer.....there is just too much metal in the coach and trailer for it to be mounted inside. 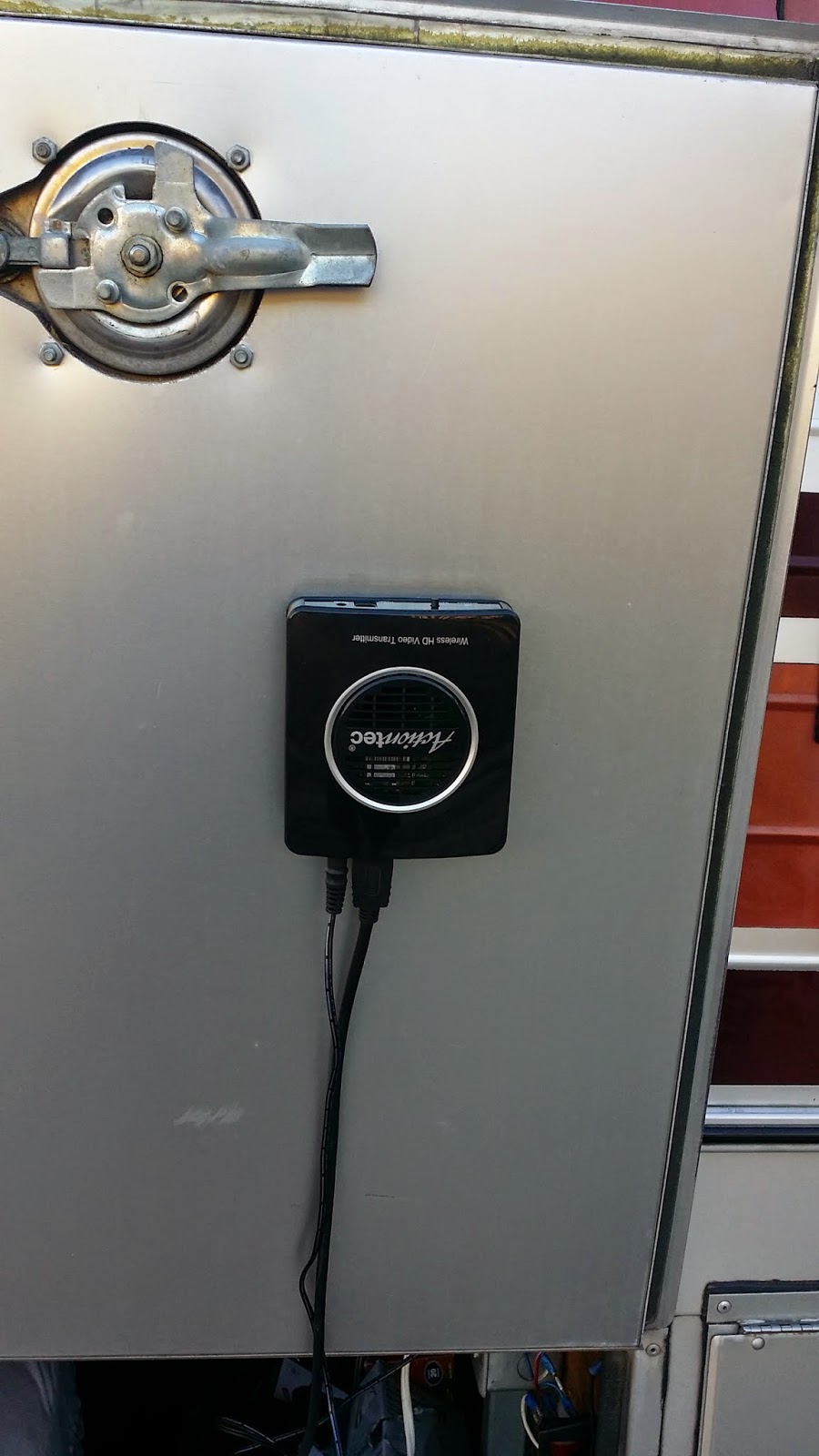 Then it was time to finally re-install the fluorescent light in the rear portion of the trailer that had previously been mounted over the work bench to replace a smaller one that was not too effective.....now there is plenty of light in the back of the trailer.  You will recall the ballast in this light went bad so I replaced the fixture with a bigger one, and ordered a new ballast for this one. 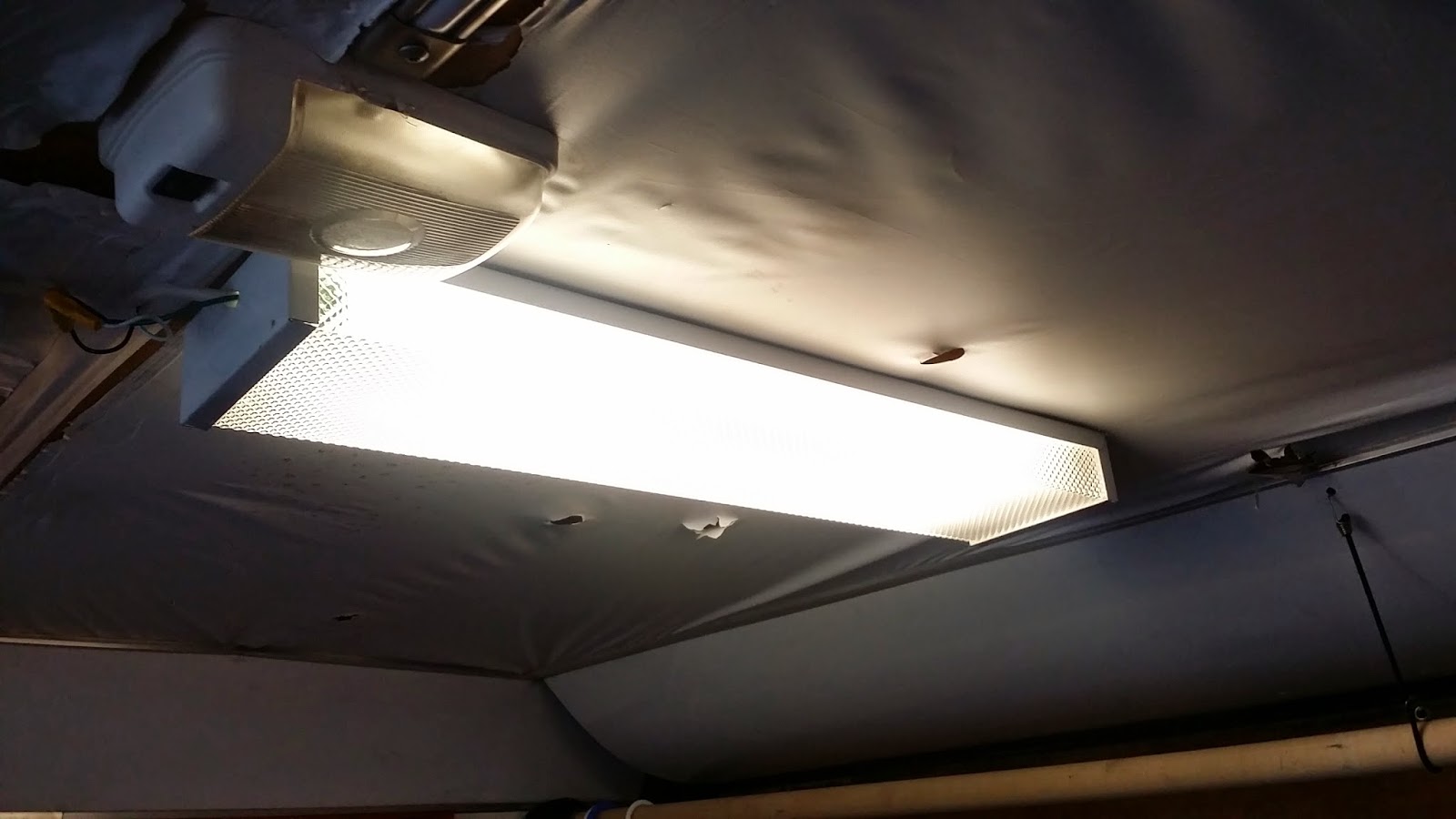 All the while I was engaged in these projects TLE was up in Rancho Cucamonga with our daughter Sharon looking over the wedding venue, and doing some shopping.

Finally, the last project of the day, which took me until almost sundown, was figuring out why the rear derailleur on my Intense 5.5 mountain bike was not shifting very well.  As it turned out I had to remove the cable, and all the cable housing and replace it all.  The cable was beginning to fray, and the housing had broken down creating a lot of extra friction.  Fortunately I carry a lot of extra bike stuff with me and it was just a matter of finding the right cable and housing to replace the old stuff.  Now it shifts silky smooth once again!

Just as I was finishing up the bike TLE arrived back home regaling me with tales of her afternoon with Sharon.  Thursday the in-laws begin to arrive for the wedding, and it will be non-stop socializing for 4 days.

Oh, by the way, I tried on my suit pants Wednesday morning......they were a little tight, but I could button them.....I was pleasantly surprised.  Nevertheless, TLE and I both decided it would be good to let out the waist a tad, so I brought her sewing machine in from the trailer, and she went to work.  By the time she was finished the pants had a much more 'relaxed' fit.....:-)  While she worked on the pants, I got out my 'black cap' dress shoes I carry around for just this occasion, and polished them up.  Now I am ready to give away my daughter on Saturday, and it didn't cost me a dime for my outfit.  The charcoal gray pinstripe suit, which I bought about 7 years ago at Men's Warehouse for my daughter, Kate's wedding, still looks and fits great!

It looks like the temps for the next 5 days will be in the mid 70's with no rain in the forecast......it won't be long now until we are rolling our wheels to Quartzite.......thanks for stopping by!
Posted by Whatsnewell at 8:57 AM