Saturday night while we were driving home from our dinner with my brother in Monrovia the 'check engine' light came on again.  That is very disappointing as I just had the car in the shop to get that fixed last week, so Monday morning I needed to take the car back to Joel's Automotive to find out what is wrong now.  I hadn't been able to ride my bike for a few days so I decided to take my bike with me and ride it back home from Joel's......."how far would that be?" you might be wondering......about 30 miles.....give, or take a few hundred yards.

I left Riverside about 10:15 and was at Joel's around 10:45.  I spent some time with Joel going over what I need to have done to the Newell when we bring it in next Monday, and then got on my bike and headed down Central two blocks to the Pacific Electric Bike Trail which follows the route of the old Pacific Electric Railroad right of way.  When it is completed the trail will cover 21 miles from Claremont through Rialto....right now it ends at the Rialto border at Maple Ave.  It's a great way for me to cover 2/3's of my ride off of local surface streets. 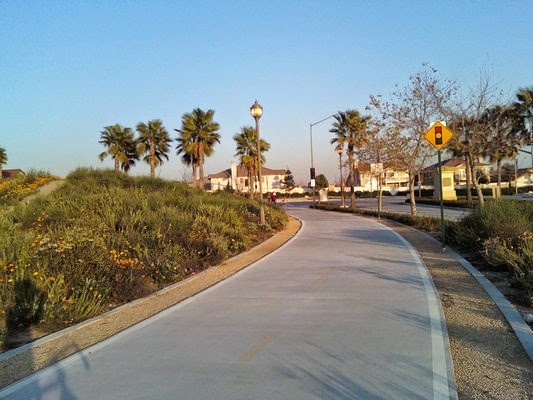 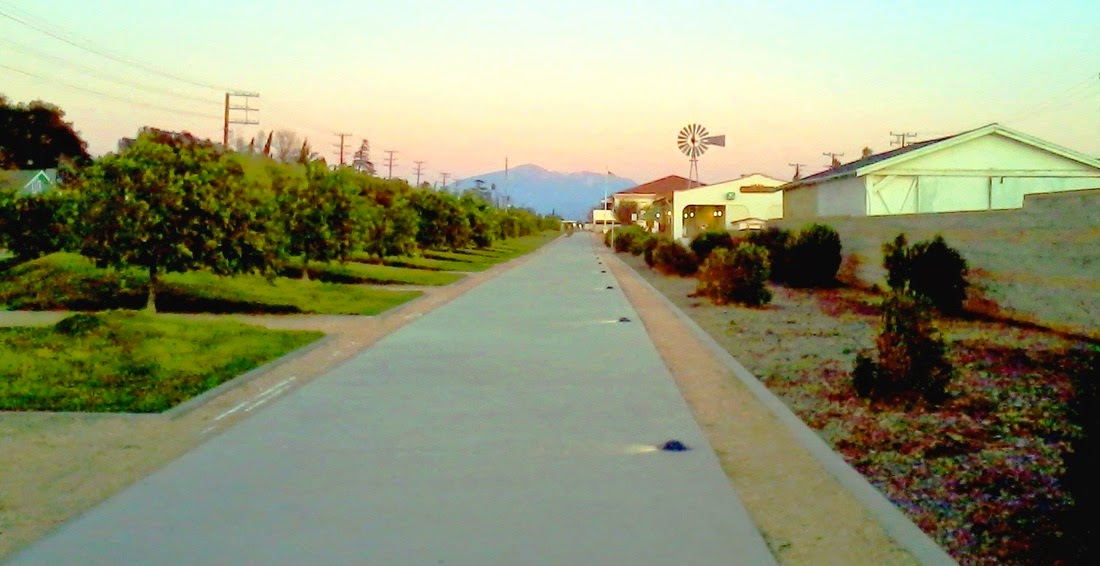 I followed the trail east to the point where it intersected Foothill Blvd., and then dropped down to Foothill to ride over to my son's office so I could pick up some mail arriving there around 11:45.....okay, 8 miles down, 22 to go.

From his office I worked my way back up to the trail picking it up again at Rochester, just above Baseline, and then continued on eastward to the Rialto city limits (Maple Ave.) where I dropped down to Rialto Ave. to continue eastward to Riverside Drive. which then heads south to Riverside, CA.  Eventually Riverside Drive becomes Main Street in Riverside.  From Main street I took 3rd over to Park, which took me back to Kate's house.   I arrived 'home' around 1:15 pm having covered just a shade over 30 miles in 2 hours and 20 minutes of  actual 'riding' time.

While I was gone TLE had been washing all the clothes in the laundry hamper, and doing a deep cleaning of the interior of the coach, so when I arrived I was advised in no uncertain terms that there would be no grass, or leaves tracked into the interior, so I am on my best behavior for at least a few more days.

I spent the rest of the afternoon reading, and getting ready to watch the NCAA National Championship game between the favored Oregon Ducks and the Ohio Buckeyes.  I expected a close game, and at one point it was 21-20 with Ohio in the lead, but the game was never really that close, and ultimately Ohio won easily 42-20.....they were just way, way better than Oregon.  If it hadn't been for 4 Ohio turnovers  deep in Oregon territory the game would have been a blowout of galactic proportions.  So, now the first National Champion has been crowned via the new 4 team playoff system, and there can be no doubt that Ohio, although the 4th seed, was the best team by far this year.