When last we left off I had run the HDMI cable for the outdoor TV to the back of the refrigerator using the 'wire chase' along the passenger side of the coach.  I spent over an hour trying to feed the cable through the insulation that lines the 'chimney' behind the refrigerator, but could not get it done, so knowing I was still going to need a couple of extra pieces to finish the installation I just rolled up the HDMI cable, and closed up the 'wire chase'.  I spent time thinking about how I was going to get that cable run that final 8 feet, and at last it occurred to me there was another way to access that area......from the roof!

There is a roof vent for the refrigerator chimney with an easily removed cover.  In case you are wondering why an RV has a 'chimney' let me explain.......most RV's come with what is called an 'absorption' refrigerator.  It is not an ordinary household type refrigerator that you just plug in and watch it get cold over a few minutes.  An 'absorption' refrigerator uses a closed ammonia system for cooling and can be run off electrical (12 volt), or propane.  Since there is heat involved in the cooling process there must be a vent, or 'chimney', if you will, to vent the heat from the rear of the refrigerator.  It was through this same chimney vent that the cabling for the solar panels was run by the installers. 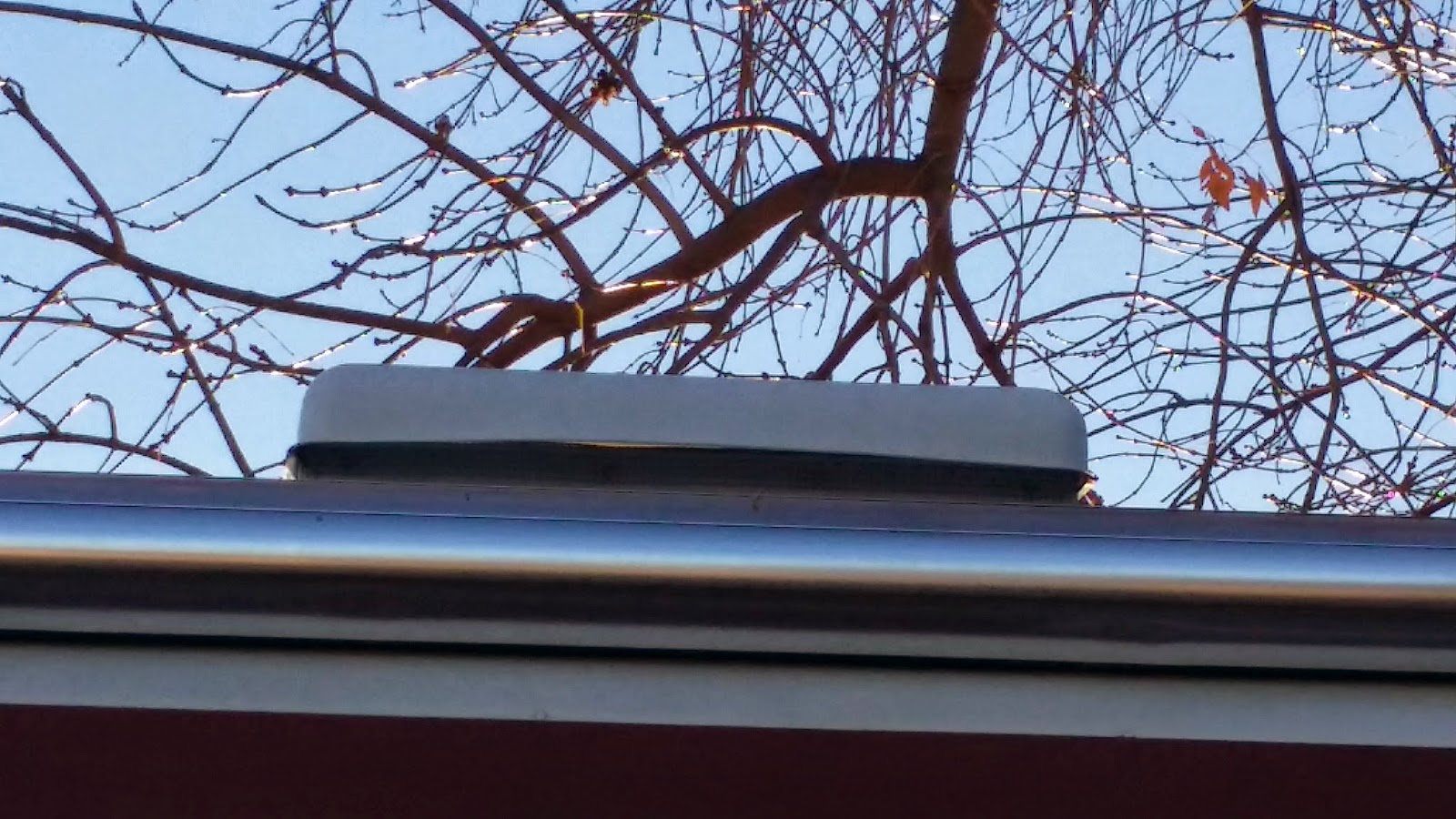 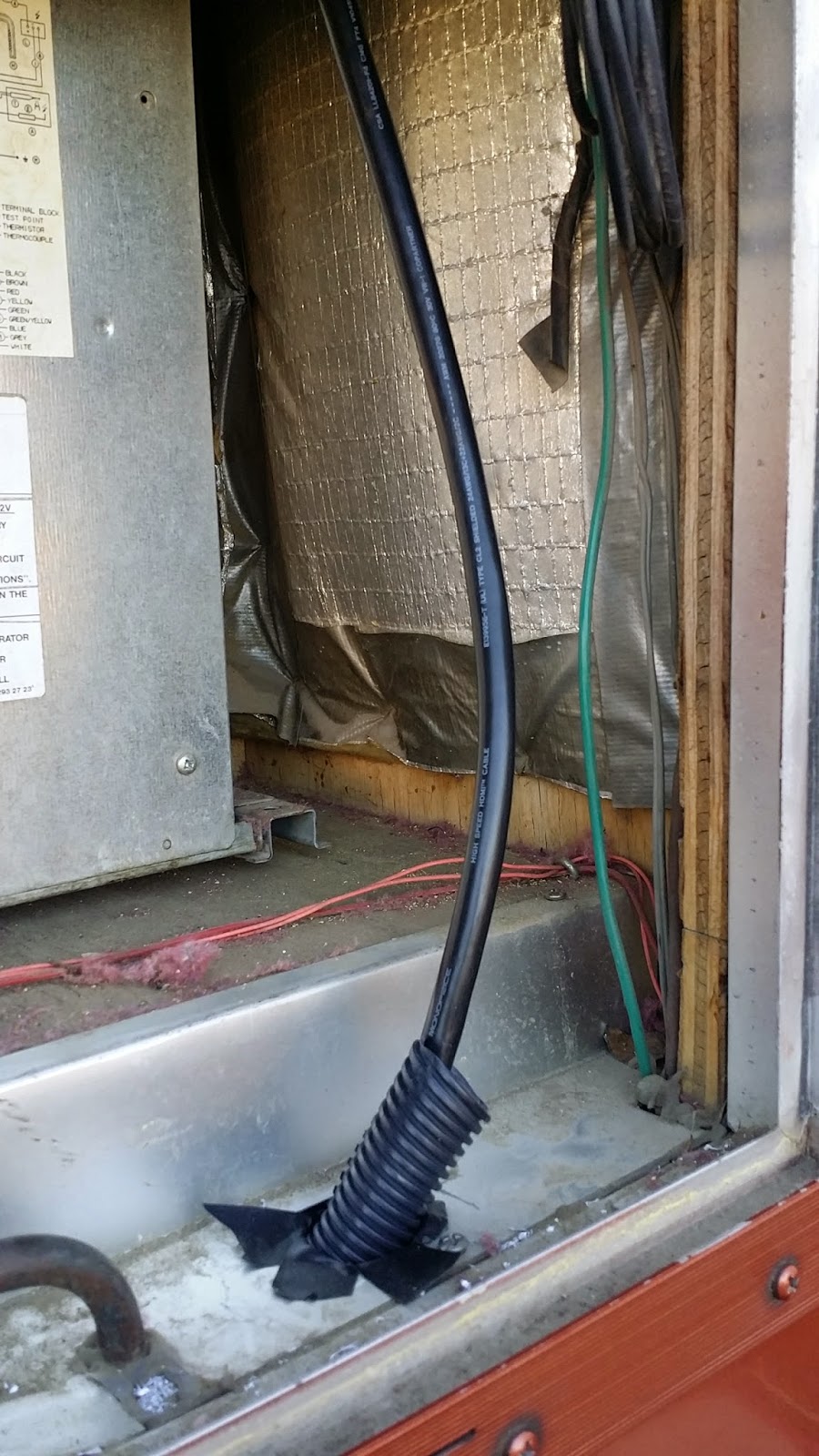 Down the refrigerator 'chimney' 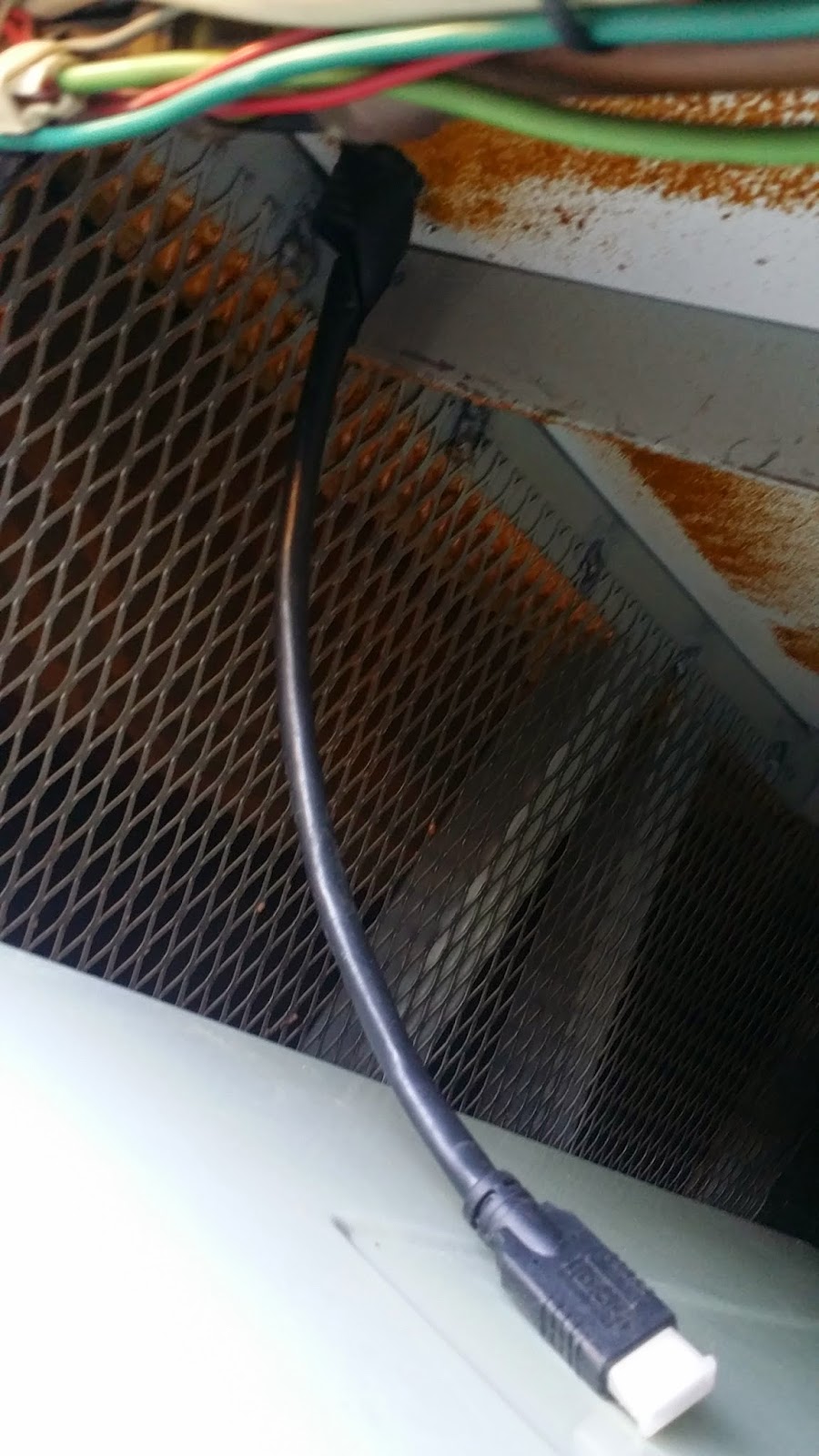 Ready to plug in to the TV!

At any rate, Tuesday was the day I decided to tackle the final eight feet......I went up on the roof, and TLE stood below while I fed a straightened metal coat hanger down through the hole in the insulation to the wire chase.....I heard her say "I got it!", and within seconds we were able to accomplish what I could not in over an hour of trying a few days prior.  Within a few minutes the HDMI cable was 'fished' through the insulation and then down the chimney.   All that remained was to drill two 1.5" holes using a hole saw, and finish running the HDMI cable.  As it turned out this took less than 30 minutes and I was done.....now all that remained was to put the new 32" LED TV together (screw on the base) and turn it on......it worked!  Next up I installed the ActionTec wireless MyTV transmitter then went back to the trailer to turn on the new 19" LED TV and ActionTec receiver I installed, and they also worked!  I know it may seem a little excessive to some that we have 4 TV's in such a small space, but being able to watch sports while I am outside, or in the trailer working on something is important to me, and makes me happy.  I still remember last summer when TLE and I spent hours outside at South Lake Tahoe watching World Cup Soccer matches.  One of the cool things about these new LED TV's is that they are so light!  My old Panasonic LCD TV (27") weighed in at about 20 lbs......the new Infinity 32" LED TV weighs about 3 lbs.......the same is true for the new trailer TV.....very, very light.....so, in the process we have eliminated about 35 lbs. of weight.

I spent about 30 minutes cleaning up after the installation, and putting all the tools way, and realized it was only Noon.  We were awaiting the call from Joel's Automotive so we could go pick up the car, and run a few errands (pickup my 'will call' order at Monoprice, pick up TLE's new reading glasses, drop off the old TV's and some other "e"waste at my son's office, etc).  The call came about 1 pm advising the car would be ready for pickup about 4 so we decided to head into Rancho Cucamonga around 2:30 pm to take care of the errands, then over to Upland to pick up the car.  By the time we finished with the errands it was closing in on 4, and I realized I had not eaten since breakfast, so we stopped off at one of our favorite fish taco places......Rubio's.....for an early dinner.  It's a good thing there are not a lot of Rubios' in the places we often travel, or it could seriously become as much an addiction as those fish tacos at Tony's Crab Shack in Bandon, OR.

From there we headed to Upland to pick up the VW arriving about 4:30.  As it turned out, the 'check engine' light was for 'knock sensor #1', but it wasn't bad, it just had not been installed with the right torque (32 foot pounds), so that was a cheap fix.  On the other hand I had asked them to check the AC as it would turn on 95% of the time, but every couple of weeks it would not.  Recently it had stopped coming on so I thought there was a bad switch, which doesn't seem expensive on the surface, right?   In this case I was right, but it was a 'control module switch' on the compressor that turns on the cooling fans when the compressor is activated.  Well, any component that has the words 'control module' attached to its description automatically increases the cost by sevenfold......'oy vey'!  TLE dropped me off and headed for home, and I was about 15 minutes behind her, arriving back in Riverside around 5:30.....fortunately, traffic was not too bad.

Well, our time is short here in SoCal......the out of town relatives will begin to arrive Thursday for the wedding, and we will begin to put our stuff away, and get ready to roll our wheels in less than a week.

Thanks for stopping by!
Posted by Whatsnewell at 7:27 AM