We slept in until almost 8 am Sunday.......I know the kids probably didn't get to sleep until then.....there was a lot of post marriage celebration that continued well into the early morning hours, as well as cleanup.  We planned to have lunch with TLE's relatives at Tio's Tacos in downtown Riverside at Noon, so at 11:40 we began our .8 mile walk over to Tio's.  This is one of favorite, funky places in SoCal, Mexican, or otherwise, and we had not yet had the chance to catch a meal there, so meeting the relatives there worked perfectly for us and them.

We ate, and talked until after 2 pm before it was time to bid adieu to everyone as there were planes to catch, and 6 hour drives back to Arizona.  It was the perfect way to see everyone off, and get a few last hugs.

By the time we got home the Packers vs. Seahawks game was into the 4th quarter, and it looked like the season was over for Seattle as they were down 19-7, and had just given up an interception (the fourth of the day for Seattle).  Then the improbable happened.....Seattle got the ball back with just under 5 minutes to go, and drove down the field for a touchdown.....now it was 19-14 with a little over 2 minutes to go.  Then Seattle attempted and successfully recovered the ball on an 'onside kick' at the 49 of Greenbay.  In just about 2, or 3 plays they scored a touchdown again to go ahead 20-19, then successfully completed a 2 point conversion the hard way to go up by 3 points with a tad over 1 minute to play.  Greenbay then got close enough to kick a field go with just a few seconds remaining to tie the game.  Seattle won the coin toss to start overtime, and drove the length of the field to score a touchdown and win the game by 6 points......21 points scored in just a few minutes.....it was an amazing finish, and now the Super Bowl matchup has been set......Seahawks vs. Patriots......should be a great game! 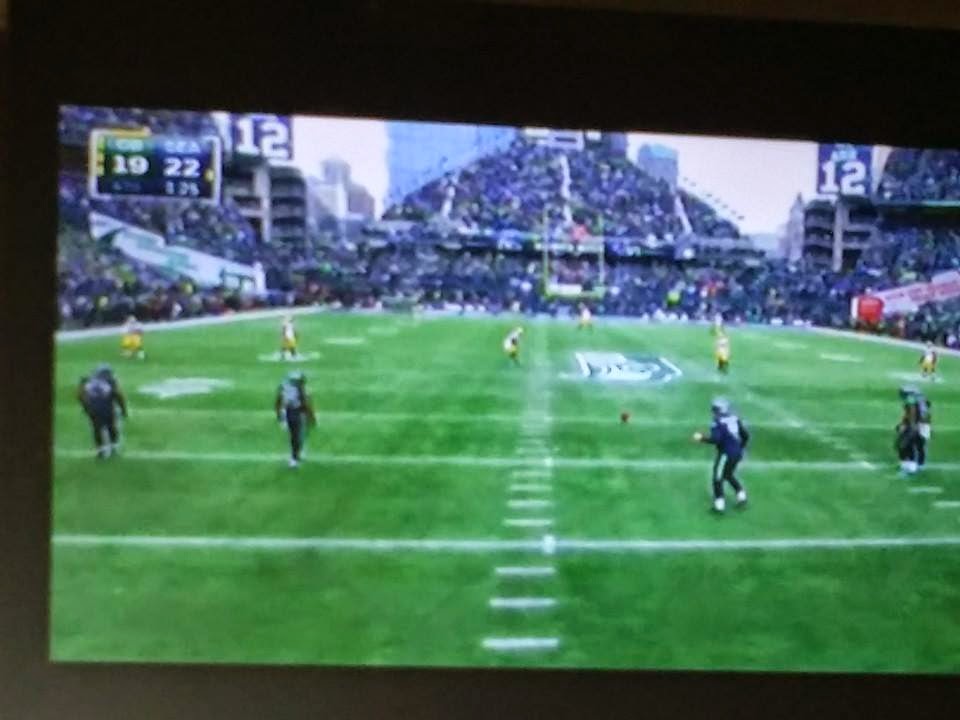 Seahawks up by 3....amazing comeback!

The night cap between the Colts and Patriots was very one sided with the Patriots winning 49-7.....and it wasn't really that close.

We sat around Nick and Kate's outdoor fireplace talking and enjoying the evening until almost 9 pm.....a great way to wind down, and say our 'until next times'.  A few of their friends stopped by (Manny, Shonda and Kevin) to share the fire, and say goodbye....we're still training them that it is 'until next time'....:-)

Monday we will be up early getting the last few things put away, and then hope to be off driving up to Joel's Automotive to have the Newell oil changed, and the four rear tires replaced.

Thanks for stopping by!
Posted by Whatsnewell at 1:13 PM