Usually when you get a 'red sky in the morning' (sailor take warning) you should be concerned, but Wednesday morning's red sky forebode no ill wind.  There is rain, however, coming this Friday and Saturday and if the weather guessers are to believed it will approach 'toad strangler' proportions out here in the desert.

Since our hosts were going to be gone all day we decided we would drive into Glendale to check out some local micro breweries and maybe a junk shop, or two, but first there were a few things to do before we left at 1 pm, and one of them was wipe the dew off the VW, and to vacuum it out for the first time in a couple of months.

In this area Bell Road is a major arterial road, the traffic can be mind numbing most days, and we were not disappointed.  Even though it was only about 25 miles to Glendale it took us close to an hour to drive that distance.  On the way the fuel light came on reminding us we needed to fill the tank, so I checked 'Gas Buddy' on my phone and found a Costco just 2 miles away from our position that had premium for $1.91/gallon......that is less than half what we paid last summer on a couple of occasions.

There are two micro breweries relatively close to each other in this area of Glendale....Rock Bottom Brewing Company and Dubina Brewing Company.  I checked them both out on Yelp and saw that Rock Bottom only had a 3.5 star rating, whereas Dubina had a solid 4.0 rating.  Most of the recent reviews on Rock Bottom complained about slow service, but it appeared they had good brews and food.  Initially, based on the reviews, we decided upon Dubina, and that is where we headed.

On the way to Dubina we passed by Rock Bottom, which is right off Bell Road.....I saw they had al fresco dining and was almost tempted to turn in, but just continued on to Dubina as planned.  We arrived there around 2 pm to find they were not open until 3 pm.......doh!!  There was no way I was going to wait another hour to have lunch, so we defaulted immediately to 'plan B' and headed back to Rock Bottom.

One thing I have come to learn since I retired is to, as our friend Karen says, 'put my patience in my pocket'.  We found a nice table out on the patio, and took our seats with no expectations about prompt service, but were pleasantly surprised.  Not only was the service quite good, the brews and food were exceptional......you just never know.  We opted for a 'flight' of their micro brews, which normally would include samples of 6 brews, however, there was one recently released brew not included that we wanted to sample (Milk Stout) so our server gave us a 7th gratis.  The flight included Kolsch, White Ale, India Pale Ale, Red Ale, Porter, Scotch Ale, and the aforementioned Milk Stout. After sampling all 7 we both settled in on the Milk Stout. 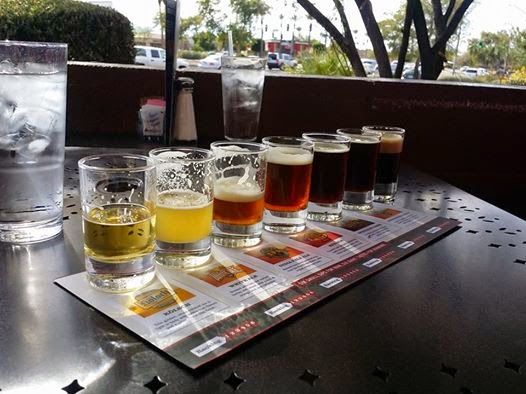 For lunch I had their Blackened Salmon Caesar salad, and TLE had their Seared Ahi salad.....both of them were memorable, and paired with the Milk Stout were exceptional.  How would we rate our experience at Rock Bottom on Yelp......4.5 stars. 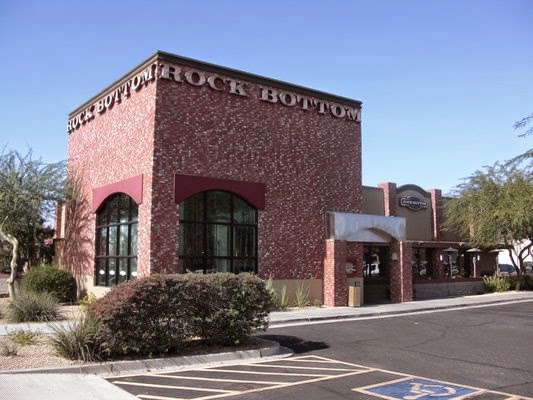 On our way home we stopped off at the Goodwill in Surprise to see what they had.....no books were purchased, but TLE did find a couple of wine glasses to replace a couple she had recently broken......$1.98.